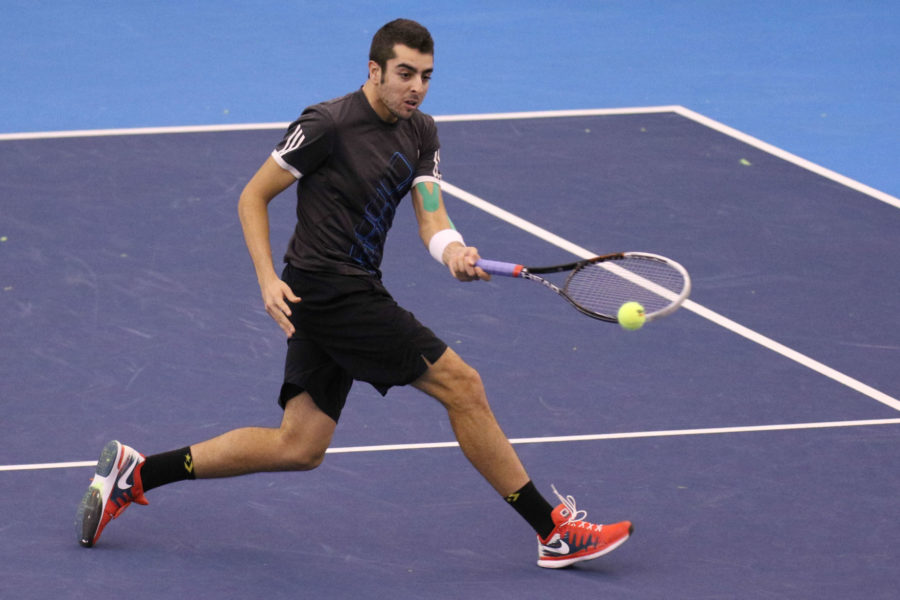 Illinois’ Farris Gosea returns the ball during a doubles match at the JSM ATP Challenger Tournament hosted by the Atkins Tennis Center in Champaign on Wednesday.

The Illinois men’s tennis team’s fall season is officially over after Indoor Nationals last weekend, but fall competition isn’t over yet for many members of the team. This week and last week, the Atkins Tennis Center has been host of tennis pros from around the world for the JSM Challenger of Champaign-Urbana, with $50,000 of prize money on the line.

This year, the tournament draw includes players ranked as high as No. 51 in the world. The draw’s top eight seeded players hold world ATP ranks from 51 to 142. The strong competition is more of the usual for the JSM Challenger. Tournament director and Atkins manager Jim Tressler said the Challenger always brings in high-profile players.

“These are guys that play in the U.S. Open and Wimbledon, the top guys in this tournament are also playing in top tour events around the world,” Tressler said. “These guys are legitimate world-class tennis players.”

“He was looking for ways to kind of put Illinois tennis on the map. In order to compete with some of the Southern schools and West coast schools, he felt like he had to do something differently,” Tressler said.

The tournament was started to give Illini tennis players a chance to play in a professional tournament, and that objective has continued throughout the tournament’s 19 years. As the host site, the tournament offers wild card bids into both the qualifying and the main draws, and Illinois is able to get most of its players into the draw. Most collegiate players would be limited to playing on the Futures circuit, the lowest tier of ATP tennis, but playing on the Challenger gives the Illini chances to earn more ATP points and play higher-ranked players.

This year, a few current Illini are in the draw. Farris Gosea and Jared Hiltzik were entered into the main draw. Gosea fell in the first round, but Hiltzik earned his first Challenger victory. Hiltzik will join his brother Aron as a doubles wild card team, along with indoor national runner-ups Ross Guignon and Tim Kopinski. Gosea will also play in the doubles bracket.

Head coach Brad Dancer said the biggest differences for Illini players jumping from NCAA to ATP is their opponents ability, both physical and mental.

“Guys at the higher levels have more weapons than our guys typically do, and they concentrate a little bit better,” Dancer said. “Some of our guys have weapons, and some of our guys concentrate really well, and those are the guys that tend to win matches in these events.”

The tournament also brings a lot of Illinois tennis alumni back to Atkins. This year’s tournament features former Illini Rajeev Ram, now ranked No. 140 in the world. Ram was a doubles national champion and a member of the national championship team in 2003. Ram and Rueben Gonzales are only the latest alumni to play.

The wild card bids are also used to help alumni get into the tournament. Last year, a wild card bid was given to former Illini Dennis Nevolo when he didn’t have a high enough ranking to get in. He made a run to the semifinals for one of the best showings of his professional career.

Kevin Anderson, now No. 16 in the world, is one of the Illini’s most prolific alumni. Anderson is ranked too high to play the Challenger now, but Tressler said that the tournament once gave Anderson a wild card bid when he was trying to make the ATP World Tour for the first time. He said that the professional alumni who play in the tournament all got the chance to play in it as an undergrad.

The tournament brings countless benefits to the Illini tennis program. Tressler said it’s one of the most critical parts of the program, because it is so unique. It’s a recruiting tool that sets Illinois apart and allows the Illini to become “absorbed in the culture” of a professional tournament.

“They get to watch it as well; they help work the event. They’re just around the event quite a bit,” Dancer said. “And then playing against guys and realizing it’s maybe not so far off.”