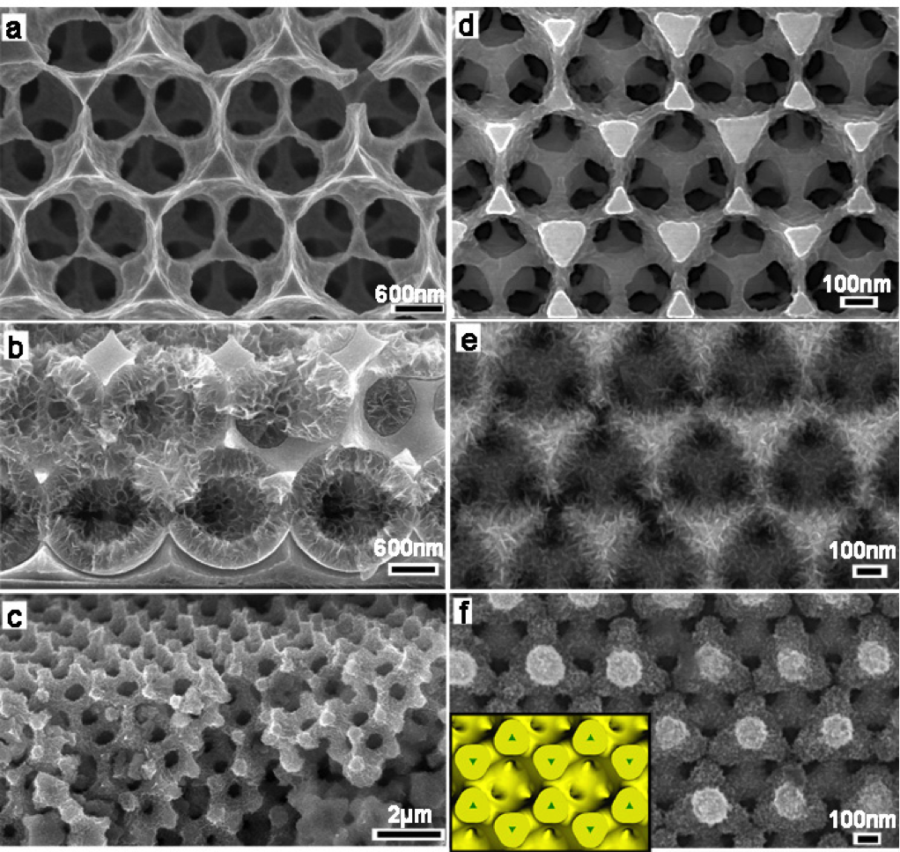 Images of the creation of the 3-D architecture, depicting the anode in images a–c and the cathode in images d–f.

In the not-so-distant future, students who have been waiting hours for a cellphone battery to recharge may only need to wait for mere minutes.

The departments of mechanical engineering and materials science and engineering are collaborating to create a lithium-ion microbattery that could charge up to 1,000 times faster than other technologies already on the market.

The research began about five years ago, and scientists are continuing to work on creating a battery that is more powerful than their small size suggests.

The basic process that takes place in a lithium-ion battery involves the oxidation of lithium, which then becomes a lithium ion and an electron. The lithium ion and electron begin moving from the anode to the cathode.

“The rate at which you can discharge or charge a battery depends on how fast the electron and lithium-ion can move,” said James Pikul, a graduate student in materials science and engineering and the first author of the publication on microbatteries. “The transport of lithium-ion is much slower than the transport of the electron. So the most power you can get out of the battery depends on how fast you can move that lithium-ion back and forth.”

Researchers are working to speed up the process in which the lithium and electron move from the anode to the cathode by creating a nano-architecture within the battery. The structure is nano-porous and resembles a sponge, with pores that are extremely small (500 nanometers, to be exact).

Another method of increasing speed is by creating a 3-D structure within the battery, which allows for more reactions to happen — and at a faster rate, said Jinyun Liu, a postdoctoral scholar in materials science and engineering.

“We make it 3-D because we want to achieve very high power density, and the reaction speed can be faster,” said Liu, whose work involves nano-structuring active materials for microbatteries.

Pikul said there are a couple of different directions being taken with this research. One of which is the microbattery thrust, which is the area Pikul is working on.

“The idea is that you can put this battery, which has a lot of power and energy, directly onto integrated circuits,” he said.

There is also work being done on macroscopic batteries, Pikul said. The idea for these batteries is to scale them up to a larger size so they can be used for things like cars or cellphones.

Pikul said that initially, regarding the use of these batteries in cellphones, they would be a component of the phone, not a full replacement of a current phone battery.

“But eventually, you could get there,” he said.

Junjie Wang, a graduate student in materials science and engineering who is also working on the lithium-ion batteries, said the team is working to discover and use materials that will improve the functionality of the battery as well.

“We are now trying to apply these structures to new kinds of materials that can have a higher capacity or higher power density,” he said.

While the researchers are working hard to commercialize the battery, a date as to when it will become available to the public is yet to be determined.