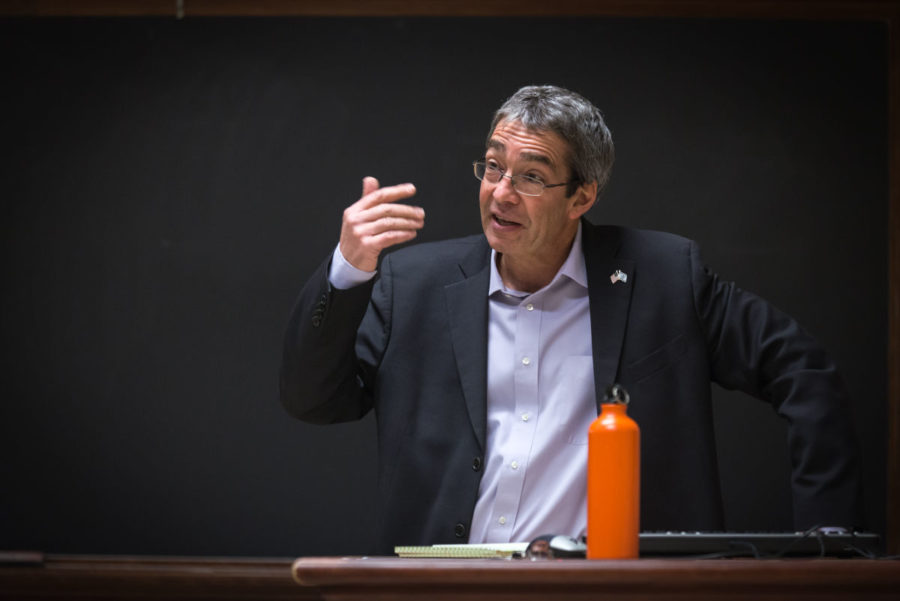 Roey Gilad (right), Consul General of Israel to the Midwest, gives a talk to students in regards to Israel’s unique situation in the Middle East at the Architectural Building on Wednesday, December 3, 2014.

In just under an hour, Roey Gilad was supposed to talk about three challenges and one opportunity Israel faces. During Wednesday night’s talk at the Architecture Building, he managed to do that while using a few Midwest examples to simplify the complex topics.

Gilad is the consul general of Israel to the Midwest, based in Chicago. Gilad said this was his third trip to the University, the previous time being for an Illini basketball game.

A good number of students who attended the talk are in Illini Students Discussing Israel, a student-led class part of the registered student organization Illini Students Supporting Israel (ISSI), who hosted the event.

“I wanted to go see him because I’m very interested in Israeli politics, and I thought this would be a great opportunity to get a more in-depth explanation of the challenges that are affecting the region today,” said Cristina Valdez, student in the RSO class and senior in LAS.

The title of the talk, “Israel Facing the Current Situation in the Middle East: Challenges and Opportunities,” suggested Gilad was going to discuss multiple opportunities with the challenges for Israel, but he shrank it down to one.

The first challenge was Iran’s nuclear strategies. According to the World Nuclear Association, Iran is developing uranium enrichment under concealed plans and Iran “has not suspended its enrichment-related activities” as required by the UN Security Council.

“If a state has both these evil intentions and ability to bring this dream come true, this is when we become concerned,” Gilad said.

Using a football-based metaphor, he said that if a team is five to 10 yards of the end zone, they’re going to score a touchdown, “unless it’s the Bears,” he said, with a chuckle.

The second challenge was the Israeli-Palestinian situation, as there “isn’t a day when there isn’t an attack” in this “time of crisis.”

Gilad approached two topics concerning the tension, one being Temple Mount. He said that currently Jews and Christians can visit the mountain, but only Muslims can pray on the mountain. While Gilad does not think that’s fair, he also said he thought “it’d be stupid to challenge the status quo now.”

The third challenge Gilad identified was the Islamic State, but he said it was not an immediate threat for Israel.

“I think they can be contained and stopped,” he said.

After his short list of three heavy topics, Gilad ended with his hopeful opportunity for Israel: the relationship between Israel and a moderate Sunni coalition, including Egypt, Jordan, Saudi Arabia, the Gulf States and North Africa.

“I don’t know how it is in the Midwest, but in the Middle East the enemy of my enemy is my friend,” Gilad said.

Gilad isn’t sure how strong of a partnership can be built on that idea, but he believes Israel and moderate Sunnis have some similar geopolitical understandings.

“I do not think Israel is a perfect place — that has to be said,” Gilad said. “But during the last 67 years, we have managed to build a strong state on a strong social glue.”