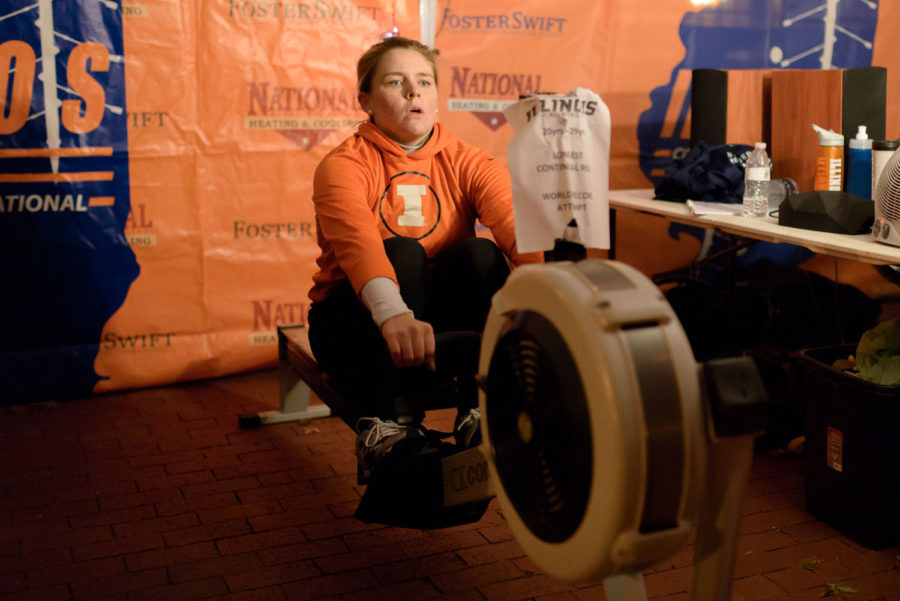 Elizabeth Dunne, senior in Media and member of the rowing team, attempts to break records for continuous rowing at the anniversary plaza on Sunday.

The Illinois rowing team broke two world records over the weekend: the large team longest continual row for the 20-29 age group and for the 19-and-under age group.

Starting at noon on Friday until noon on Monday, the men’s and women’s novice and varsity teams rowed for 72 hours non-stop on the Quad.

The previous records for these events are 52 hours for the 20-29 age group, and 32 hours for the 19-and-under age group. When asked about breaking the records with simultaneous 72-hour rowing sessions, men’s rowing president Lucas Gonzalez said, “We’re setting the bar pretty high with 72 hours.”

The team attempted to break these records for different reasons. One is to help with the big recruiting push the team plans to make in the spring. With three brand-new boats being purchased, the team would love nothing more than to have a bevy of new members keeping the team afloat. When asked about this, Gonzalez said, “This event is really a showcase of our determination, legitimacy and drive, which is what it takes for us to compete on such a high level.”

In addition to the recruiting push the team plans to make, the rowing team is also celebrating its 10-year anniversary.

“It’s the team’s 10-year anniversary and we thought we should do something special,” Gonzalez said. “We already have two national championships and two state championships, so we thought we’d throw two world records into the mix.”

With numerous accolades, and the third-highest collective grade point average for any Illinois team, Gonzalez said he thinks rowing has paid its dues and deserves a little more attention.

“The rowing team has yet to become a well-known team. We qualify for nationals every year, compete against big colleges East Coast to West Coast, and compete all around the country,” Gonzalez said. “It’s a shame that such a great sport isn’t more well known, and that we have to struggle to get recruits.”

Right now the team has 29 members on the men’s team and 24 on the women’s team. The team plans to add another 32 athletes (16 for men and 16 for women) after winter tryouts.

The team’s tryouts start Jan. 27. Tryouts usually begin at 6 a.m. and are located at the ARC Gym One. Gonzalez said rowers of all levels are encouraged to try out. The team will continue to grow through tryouts, and with new boats and new members, more broken records may be on the way.

Drake can be reached at [email protected].