Illinois falls back on bad habits as season progresses 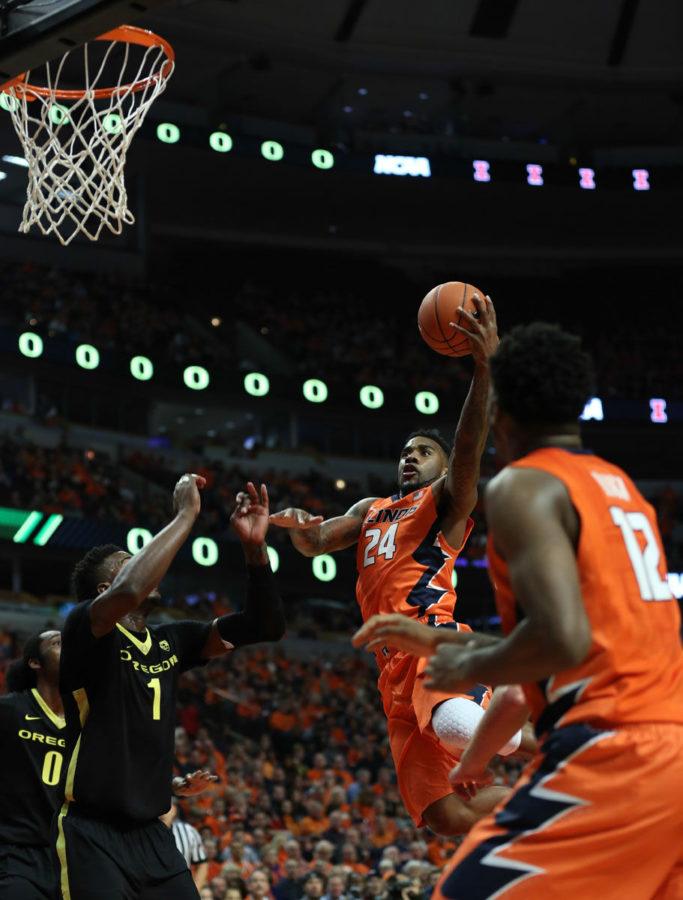 According to head coach John Groce: Illinois is not yet a “team.”

While the Illinois men’s basketball team has looked to make noticeable improvements to its offense this season, both the offense and defensive sides of the ball have sputtered of late. The Illini (7-3) haven’t found consistency early on this year, and the team has harkened back to bad habits, losing three of its last four games as a result.

“We’ve got to learn how to stay connected and have that grit,” Groce said after the Illini’s loss to Villanova. “We’re just not there yet.”

At the start of the season, Groce preached the return of offensive balance for the Illini as the team began the year with two new transfer guards, Ahmad Starks and Aaron Cosby, in the starting lineup.

Groce touted both Cosby and Starks as remarkable shooters for good reason; both had shot close to 40 percent from three for at least a season of their college career before coming to Illinois. So far for the Illini, neither Cosby nor Starks has gotten into an offensive groove.

Over the next four games, three of which were losses to then-No. 15 Miami, then-No. 7 Villanova and Oregon, the Illini reverted back to an offense similar to last year, in which the Illini settled for shots taken by senior guard Rayvonte Rice. Rice scored 59 points combined against Villanova and Oregon but shot the ball five times more than anyone else on the Illini against the Ducks.

Illinois has continued to share the ball well, as the team finished the Oregon game with 17 assists on its 23 field goals, but the Illini only had one other player reach double figures in points on the night. This is becoming a common theme, as Illinois has struggled to find a second offensive option behind Rice.

“Obviously we need more balance with our scoring,” Groce said after the Oregon game.

Starks and Cosby haven’t provided balance of late. The pair shot a combined 2-for-20 against the Hurricanes and 3-for-15 against the Ducks, a game in which Cosby was benched in favor of sophomore Kendrick Nunn.

Despite his poor play, Groce said he will continue to ride Cosby’s shooting slump, feeling the junior is better than his numbers currently indicate.

“(We have to) encourage him, as long as he takes good ones,” Groce said. “We’re just going to continue to encourage him to do what he does.”

On the other side of the ball, the Illini have also faltered. Illinois, a team that finished as one of the best defensively in the country last season, held five of its first six opponents fewer than 70 points but has managed that just once in the last four games.

“We fell out of character,” Malcolm Hill said after the Villanova loss. “We lost ourselves. We got a little too selfish on the offensive and defensive end.”

After the Oregon game, Groce’s message about what needed to change for the Illini was similar to Hill’s, but more blunt.

“Defending,” Groce said. “We have to defend better.”

Although Illinois is in a rut at this point, the Illini can take comfort in knowing that the season is far from over and there is still time to improve and become more of a “team.”