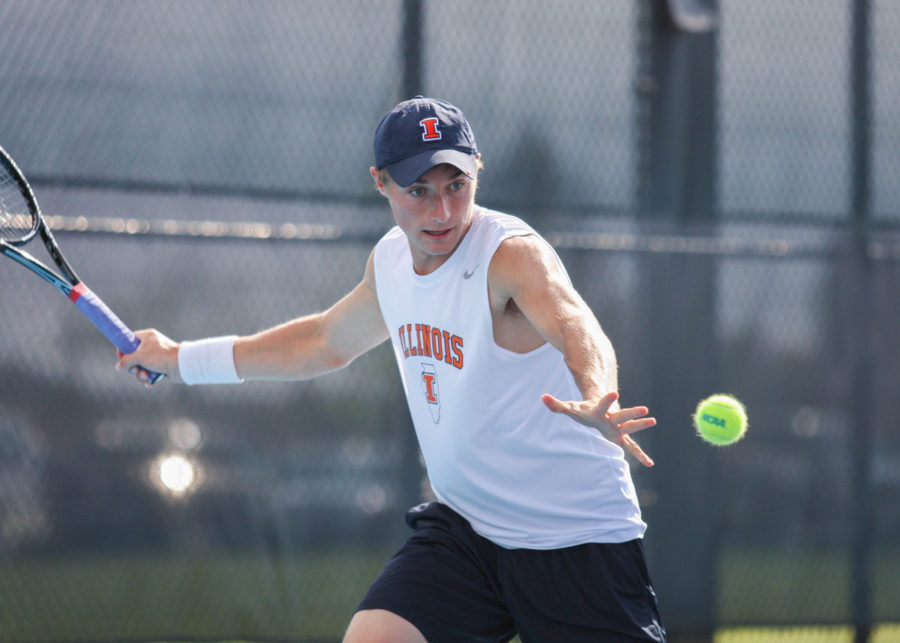 Illinois’ Tim Kopinski prepares to hit the ball back during the first round of NCAA Tennis Regionals against Ball State University at Khan Outdoor Tennis Complex on May 9. The Illini won 4-0.

The Illinois men’s tennis team played its best tennis of the fall right at the end.

Ross Guignon and Tim Kopinski finished out the fall season with a bang. A week after a run to the finals of the ITA National Indoor Intercollegiate Championships in New York, juniors Guignon and Kopinski won their first ever professional title at the JSM Challenger in Champaign. A few days after proving their place among the elite of collegiate tennis, the pair showed that they can hang with world-class professionals as well.

“It’s a great experience for us to get the extra matches against some of the best guys in the world,” Kopinski said. “To win that definitely gave us a bit of a confidence boost … Everything kind of came together for those two weekends.”

Guignon and Kopinski hit their stride as the season went on. Their first tournament play together this fall came against stellar competition at the ITA All-American Championships. The duo fell in the first round, but rebounded to make the consolation finals. Their next extended action together was in New York for Indoor Nationals, which they entered unseeded. Guignon and Kopinski then proceeded to take down three regional champions in a row to reach the finals, where they lost a hard-fought match to Yannick Hanfmann and Roberto Quiroz of USC.

Kopinski said the doubles success also helped improve his singles game — Kopinski reached the singles round of 16 at ITA All-Americans. He lost to Baylor’s Julian Lenz, the No. 1 player in the country, in a hotly contested match.

“Some of that confidence from doubles transferred into singles,” Kopinski said. “(I) started serving better, returning better, so hopefully I can keep that trend going.”

Several Illini freshmen also made a splash. Australian Aleks Vukic had an impressive debut this fall, putting together an 18-4 record on the season. Vukic kicked things off with a semifinal appearance in the Southern Intercollegiate Championships, his first collegiate tournament. He rattled off seven consecutive wins in All-Americans pre-qualifying and qualifying to reach the cusp of a tournament berth, ultimately falling in the final round of qualifying. Vukic capped off the fall with a 4-0 record at the Texas A&M Conference Challenge.

He was one of two perfect freshmen at the Conference Challenge. The other was Aron Hiltzik. Hiltzik improved as the season went on. He had a breakout performance of sorts at the Midwest Regional Championships, where he reached the semifinals. Head coach Brad Dancer said the freshmen had a positive first season.

“I think they all showed some great promise, and that was exciting to see,” Dancer said. “They all had some good wins at one point or another, and then had some times that maybe showed they weren’t ready to make that elite jump.”

Dancer also felt Aron’s older brother Jared progressed as the season went on, noting a strong finish in his showing at the JSM Challenger and on the practice court. Hiltzik had an up-and-down fall; after reaching the finals of the ITA Midwest Regional, he lost his next six matches.

For the team though, the focus is always on the spring. The fall season is individual-based in college tennis, and the spring is where team championships are won. Dancer said the fall is ultimately about preparing for success in the spring.

“What we’re measured on each year is our team production,” Dancer said. “We’re trying to train and create competitive opportunities that allow (the team) to make improvements and be performing at their best in the spring.”