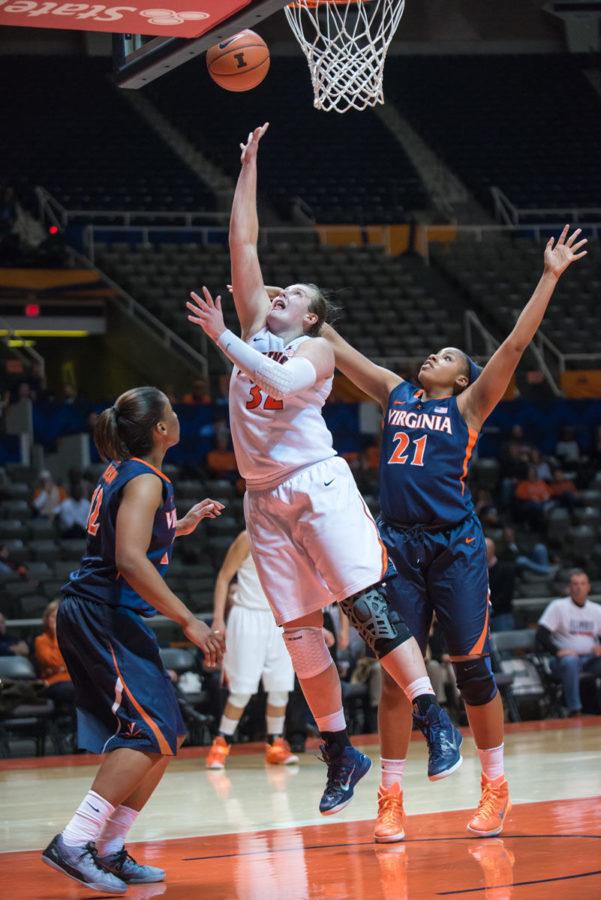 Illinois' Chatrice White attempts a layup during the game against Virginia at the State Farm Center on Dec. 4.The Illini won 86-63.

Still with two games to go before Big Ten play begins, the Illinois women’s basketball team has already had a season’s worth of ups and downs. Currently sitting at 7-3, the Illini have a win over a top-10 team, but all three of their losses are to unranked opponents.

Through the first 11 games of the season, head coach Matt Bollant has seen the biggest growth in his team on the offensive end. After going 0-for-21 from the beyond the arc in the season-opener, the team has become much more consistent.

“On offense, we’re figuring it out, we’re taking better shots and our shooting percentage in the last eight games is night and day better than the first few games because of the shots we’re taking,” Bollant said.

A big reason for the 7-3 start and the offensive success has been due, in large part, to two newcomers, which Bollant expected from the beginning. Freshman center Chatrice White has already been named the Big Ten Freshman of the Week twice this season and is averaging just two rebounds shy of a double-double. White was described by Bollant in the preseason as a “program-changing” player, and it seems like she’s on her way to becoming one.

“(Being named Big Ten Freshman of the Week) is pretty cool,” White said laughing. “I saw it on Twitter the other day and I was like, ’Ok cool, let’s go to practice now.’ So yeah, it’s cool.”

The other newcomer making a big impact is redshirt junior point guard Kyley Simmons. Simmons sat out last season with the Illini because of transfer rules, but has seen a huge role on this year’s team since day one. Bollant had said in the preseason that he expected Simmons to end up being one of the best point guards in the conference by the end of the season. Simmons is averaging a team-high 35 minutes per game. With all of that time on the floor, Simmons feels her biggest improvements so far this season have been as a leader.

“I take a lot of responsibility for just knowing my teammates and their strengths and I just want to make my teammates look good,” Simmons said. “As a point guard, that’s a big aspect of the game.”

While the rotation coming off the bench remains fluid, Illinois still has two games before it looks to make some noise in what’s shaping up to be one of the best conferences in the country yet again. To get to that point, though, Bollant sees the biggest improvements still needing to be made on the defensive side of the ball.

Aside from on-court adjustments, Bollant also wants to see growth in an area he has constantly been looking to improve. The attendance numbers at State Farm Center have been near the bottom of the Big Ten for years now.

“We’re working really hard at that, to try to grow it and get it better and we’ve obviously taken some great steps from last year but we need help,” Bollant said. “We need people to show up and be excited about it and embrace the program.”