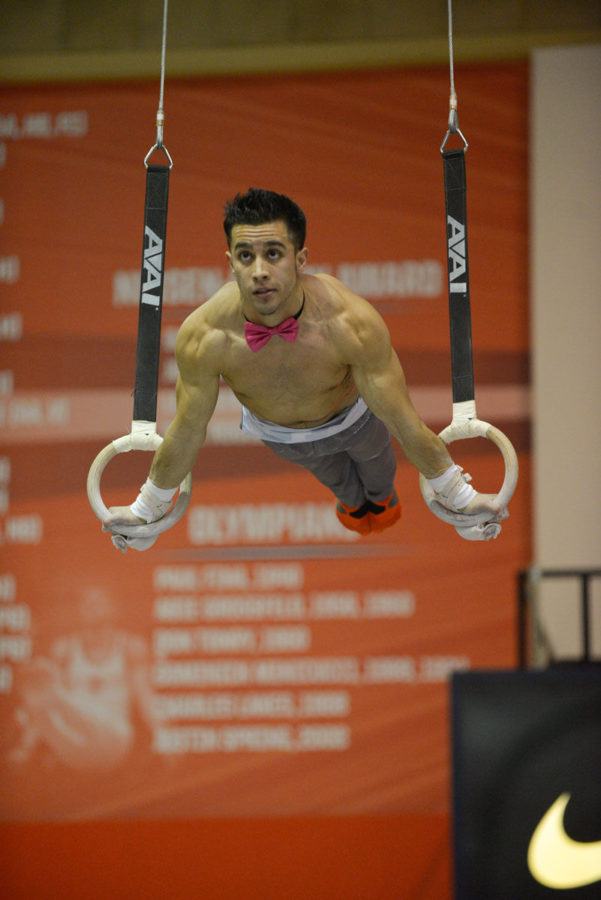 C.J. Maestas performs the rings routine at the Orange and Blue Exhibition at Huff Hall on Dec. 7.

The Illinois men’s gymnastics team did not feel like there was much to celebrate after coming in first out of six teams at the Windy City Invitational this weekend.

The Illini were not in as good of form as they expected and are still trying to figure out their best lineup after injuries sidelined sophomore Chandler Eggleston and junior Fred Hartville prior to the season.

Eggleston suffered a ruptured patella tendon and will not return this season. Instead, he will redshirt. Hartville is estimated to miss a few more weeks after suffering a minor knee sprain.

“The results show us having an excellent weekend, but the fact of the matter is we know we have to be a lot better,” head coach Justin Springs said. “(The injuries) tremendously weaken our lineup. We really have to step up.”

Maestas, who was awarded Big Ten Gymnast of the Week following his performance in Chicago, won the floor, rings and all-around titles.

“We’re excited with the win but still hungry and unsatisfied,” Maestas said. “We’re overachievers. We’re not going to be satisfied until we have that trophy at the end.”

“The past few weekends have been eye opening in a couple of spots where we can see we are weaker,” Valdez said of the Illini’s winning performances against UIC and at the Invite. “It comes down to filling the shoes of Chandler on floor, vault and high bar.”

Valdez said he plans on being one of the members who is used from time to time to compete in the vault.

Even though the Illini put up solid performances at the Invite, the result did not come without a little bit of a shock.

“We came off a team meeting, right after parallel bars, and we were a little bit down and we were surprised that we won,” Valdez said. “It’s fantastic to hear that even on one of our harder days where we struggle and fight through to the end, that we are still right up there at the top with everyone else.”

The Illini will face the Buckeyes again this weekend at Columbus, Ohio.