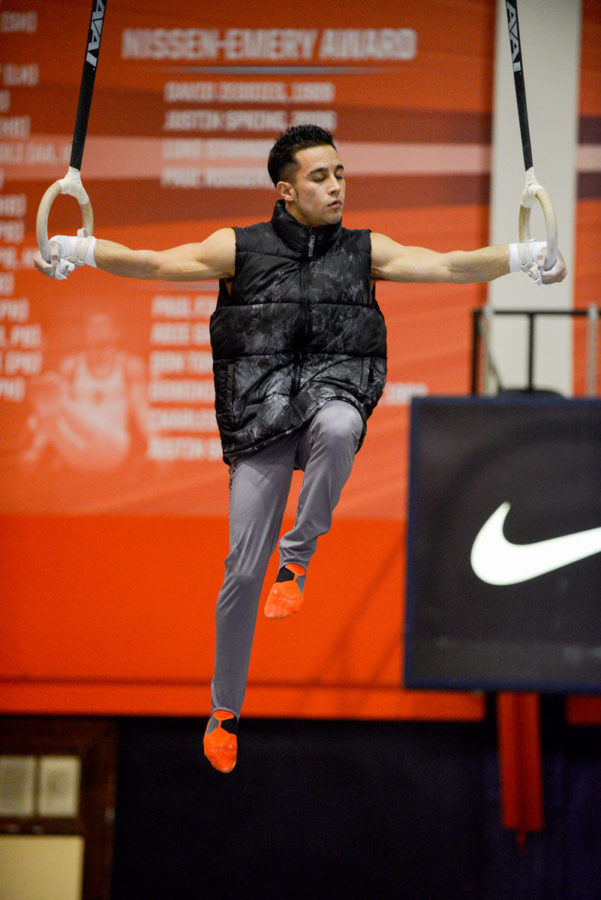 Editor’s note: The Daily Illini sports desk sits down on Sunday nights and decides which Illinois athlete or coach is our Illini of the Week. Athletes and coaches are evaluated by individual performance and contribution to team success.

As one of the leaders and top performers on the Illinois men’s gymnastics team, redshirt junior C.J. Maestas knows how to carry his team in more ways than one.

During this weekend’s Windy City Invitational, Maestas had a standout performance against a field that included the two-time defending national champions, Michigan, and last season’s fifth-place Ohio State. He clinched the floor exercise (with a score of 15.150), still rings (15.400) and all-around (87.500) titles.

Maestas is now tied for fifth on the Illini’s all-time list for most still rings titles with 16 and is sixth in all-around titles with 10.

“C.J. is that guy who’s going to go out and hit,” head coach Justin Spring said. “You have some competitors that just live for competition, they get excited and then they rise to the occasion … C.J. is on that level.”

During the invite, there were times when the team felt skeptical about its chances of coming in first. Senior Jordan Valdez said the team was surprised when it heard the results.

Although skeptical, Valdez said part of what kept the Illini motivated throughout the invite was Maestas’ performance.

“They talk about momentum in football games and basketball games, but it really is a shift that you can feel when you have a guy like C.J. that just goes out and does amazing gymnastics,” Valdez said. “He pumps up the crowd, he pumps up the team and it rolls over into the next guy’s routine.”

Gaining energy from Maestas’ routines at the Invite came during moments when the Illini were in need of a momentum shift.

“The way the timing worked out in our lineup, C.J’s routines came up after a couple hard routines for the team, and that shift really helped out the next few guys,” Valdez said.

While Maestas helped swing momentum with his title clinching routines, he also is known to provide spark while being a spectator.

When not competing, Maestas is known as one of the more vocal leaders who teammates can look toward for encouragement or advice about a certain routine.

“He is able to rally the troops and really get them to buy in and feel excited,” Spring said. “You can’t lead a group of 15 men into battle without great leadership, they’ll lose themselves. C.J. is that (leader).”

Maestas said one of the most important things he tries to accomplish as a vocal leader is teaching the newer members of the team how to never be satisfied and keep moving toward bigger goals.

“I know what it takes,” Maestas said. “We won the national championship my freshman year in 2012. My junior year we went to Michigan and we took fourth. That was a tough pill to swallow. The sophomores and freshmen who are younger don’t really understand yet, but we’re trying to teach them that just because we won, doesn’t mean anything. We can always do more.”

With key injuries to sophomore Chandler Eggleston and junior Fred Hartville, the Illini will be even more reliant on the performances and leadership of Maestas in the coming weeks.