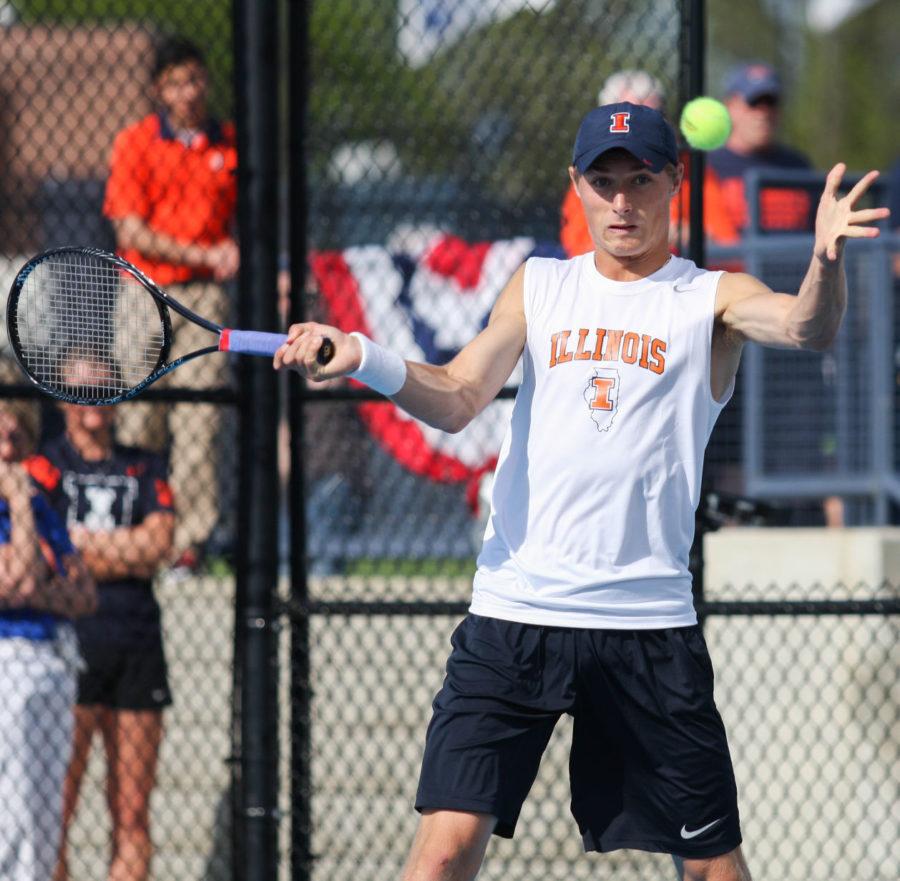 Illinois’ Tim Kopinski prepares to hit the ball back during the first round of NCAA Tennis Regionals against Ball State University at Khan Outdoor Tennis Complex on Friday, May 9, 2014. The Illini won 4-0.

The Illinois men’s tennis team‘s season came to an end last year in the Sweet Sixteen of the NCAA tournament. It fell 4-0 in only its second shutout loss of the season. Both of those losses came against the same team: the Baylor Bears.

Baylor was a thorn in the Illini’s side last year. Led by two top-15 players in Julian Lenz and Patrick Pradella, the Bears effectively shut down a highly-ranked Illinois team. Now it’s a new season, and after last year’s defeats, the No. 11 Illini are headed to Waco, Texas, to take on No. 6 Baylor in an early-season dual meet.

“We have a lot of respect for their team and feel like we want to give our guys a great challenge here early in the season,” head coach Brad Dancer said. “We came here to win this match.”

No. 40 Tim Kopinski played in both of the team’s matches against Baylor last year, falling to Pradella, who has since graduated, and Diego Galeano. Kopinski already faced the Bears’ best player this fall in the Round of 16 at the ITA All-American Championships. Then-No.1 Julian Lenz defeated Kopinski in a hard-fought match 6-7 (2), 6-2, 7-5. Kopinski said in the fall that he had his chances in the match but couldn’t finish Lenz off. Now he may have the chance for an early season rematch.

Both Kopinski and Lenz kicked off their spring seasons last weekend. Lenz had a seven-match win streak snapped that dated back to the first round of the All-American Championships in November. Kopinski went 1-1 against Memphis’s top-two players at the Illini Invite in Fort Myers, Fla. The Illini finished 17-6 overall in the tournament.

Baylor will see some familiar faces as Illinois returns every player from last season’s roster. But Illinois has also added some impact freshmen in No. 44 Aleks Vukic and No. 62 Aron Hiltzik. Both earned individual rankings after strong fall seasons and Vukic went 5-0 at the Illini Invite. The Illini have four players ranked in the ITA Top 125, compared with Baylor’s three.

Baylor started its spring season with an 18-11 mark at the Sherwood Collegiate Cup in Thousand Oaks, Calif., last week. It faced some of the top teams in the NCAA, including reigning national champion and current No. 1-ranked USC and No. 4 UCLA. Four of the six singles players who defeated the Illini in the NCAA tournament are back this year for the Bears.

While the Illini feature mostly American-born players, for Baylor it’s the opposite. The Bears only have two Americans on their roster and neither played a single match in the fall season. Eight of Baylor’s 10 players hail from Europe or South America. It’s a different approach from Dancer, who said in the summer that he takes pride in having such a domestic and Midwestern-based team.

“They’re two different philosophies on how to build a program and we have a lot of respect for what they’ve been able to accomplish,” Dancer said. “They’ve got great players and they’re well-coached.”

For now, Dancer is ready to see how the Illini respond in a match against the team that eliminated them last year. While it’s still just the first dual meet of the season, Dancer says the Illini are in Waco to win.

“We know it’ll be a long season; we know we have lots of great challenges in front of us after this match,” Dancer said. “But we’re coming here to win this match.”

Christopher can be reached at [email protected] and on Twitter @ChrisKennedy_4.