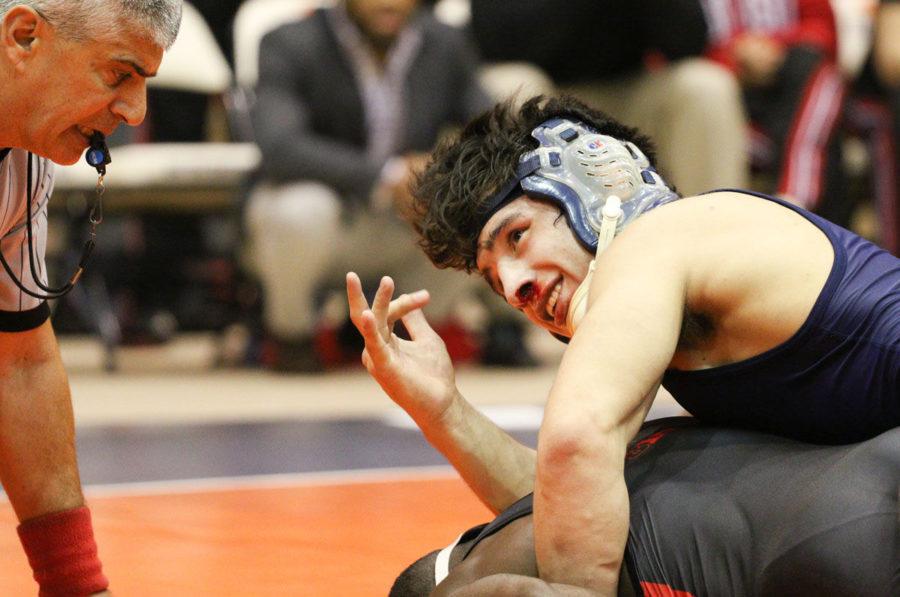 Illinois’ Isaiah Martinez pins down Nebraska’s James Green and gestures for the crowd to cheer during the wrestling match vs. Nebraska at Huff Hall on Friday. The Illini lost 22-9.

For the past two years, Illinois has claimed a national champion in wrestling: Jesse Delgado. This season, the three-time All-American and 125-pound two-time national champion enters his senior campaign. The dusk of Delgado’s stellar career leaves many wondering how the Illini can ever match such production and prestige in the future.

In a dual meet against the No. 12 Nebraska Cornhuskers on Friday, teammate Isaiah Martinez seemed to answer any questions regarding the future of Illini wrestling.

The redshirt freshman has been a sure-win for the Illini at 157 pounds all season, racking up a 20-0 overall record and the third overall ranking in his weight class prior to Friday’s home meet against Nebraska, a meet the Illini lost 22-9.

Despite registering wins at No. 2 Iowa and No. 1 Minnesota just a week before, Martinez’s match with Nebraska’s James Green, the fourth-ranked individual at 157 pounds, could be his toughest test of the season.

In the 157-pound bout, Martinez claimed victory over Green in a fashion that didn’t seem to match the final score.

“He (Green) was dog tired,” Martinez said. “Next time, if the third period doesn’t get away, I could take him down three or four times.”

The dismal overall performance by Illinois as a team seemed to elevate the magnitude of Martinez’s 1-0 win, which he followed up by pinning No. 10 Northwestern’s Ben Sullivan on Sunday. Martinez is now 22-0 and already has six Big Ten wins, the same amount of conference wins reigning national champion Delgado had all last season.

“I’m just stubborn,” Martinez said. “I’m very competitive and I’m self-critical, the confidence and will to always improve myself and believe I can do better has really helped me this year.”

Although wrestling is often portrayed as an individual sport, Martinez credits his teammates as being a key factor in his success so far.

“They’re my brothers,” Martinez said. “We’re in it together, more than just every day in the practice room; it’s awesome having a relationship with the guys like that. We battle each other, we want to make each other better and get ready for competition, just like iron sharpens iron.”

His teammates and head coach Jim Heffernan were much less modest in their evaluations of Martinez’s start to the season.

“He’s got a lot of natural ability and toughness,” Heffernan said. “It’s the way he practices, too. He works hard in the weight room, does extra workouts on his own. He gets more excited every chance he gets to wrestle someone. Motivation is not an issue with him.”

“He’s ran into a few good tests and he’s overcome all of them,” 174-pound sophomore Zac Brunson added. “All the hard work he’s put in training with us the last year and a half has paid off.”

Martinez will likely climb up the wrestling rankings this week, bringing increased expectations for a deep run at nationals in St. Louis this spring. As the dual season begins to wind down and nationals lurk around the corner, Martinez and his coaches know that championships are not won in the regular season.

Despite being undefeated and arguably the best wrestler in his weight class in the country, Martinez emphasized those accomplishments will mean nothing when March arrives.

“It doesn’t matter if you’re 0-50, you just need to be 5-0 at the end of the year (in the tournament),” Heffernan said. “That determines what type of season you have. He knows that.”

“I don’t care about being undefeated,” Martinez said. “All I care about is those five matches in March, and bringing home a national title to the Illini this year.”

If there is a face of Illinois wrestling, it is becoming clear that the mantle is passing from Delgado to Martinez.

It may be unfair to peg Martinez as “the next Jesse Delgado,” but it’s easy to say that Illinois wrestling has a bright future if a character like Martinez is leading the way.

“This sport is way too hard to be a robot like a lot of guys are,” Martinez said. “I want to express myself and show my emotions. We need characters, it’s just part of the sport.”

Ethan Swanson can be reached at [email protected] or on Twitter @EthanSwanson88.