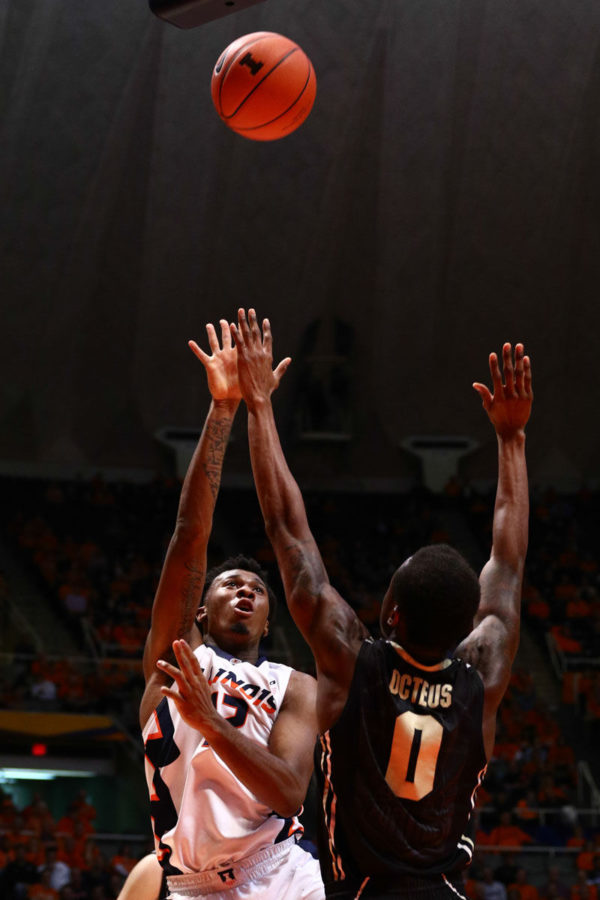 Illinois’ Leron Black attempts a shot during the game against Purdue at State Farm Center on Jan. 21. The Illini won 66-57.

After putting up his first-career double-double against two 7-footers from Purdue last week, freshman forward Leron Black cited his mother’s parenting as well as encouragement from the coaching staff and his fellow players as the reasons why he persevered through his early-season struggles for the Illinois men’s basketball team.

“My mom didn’t raise a quitter,” Black said. “So I wasn’t going to quit. The coaching staff and the players told me to keep pushing and keep working and that’s what I did.”

Black has always provided consistent energy and intensity for the Illini, but until recently, his statistical contributions to the team were minor.

After snagging nine, 13 and nine rebounds against Indiana, Purdue and Minnesota, respectively, Black’s input on the stat sheet and his impact on the game is coming around — just as head coach John Groce thought it would.

“I’m proud of him for staying the course,” Groce said. “A lot of guys in his situation, when he didn’t play quite as much there for a while, would have pouted and he didn’t do that. He lear?ned and got better.”

Although Black’s improved play was first noticeable against Indiana, Groce and the coaching staff had already seen improvements the week prior.

Groce said as the season has progressed, Black has picked up his game on both offense and defense and cut down on errors in practice. Groce added that while Black wouldn’t have been able to pinpoint what he did wrong on plays at the beginning of the year, he can now do so effortlessly.

“There’s a lot of stuff I had to remember, but I knew all of it,” Black said. “It’s just something as you get into the game, get into the moment of the game, you lose focus sometimes. But I feel like I’ve learned it more and went over it more in practice.”

Against Indiana on Jan. 18, Black’s on-court improvements were on full display for the first time.

In front of a sellout crowd at State Farm Center, he put on a show. He tallied eight points and nine rebounds, while continuing to bring his trademark energy for the entire game.

“Leron’s one of the most hard working players on our team,” center Nnanna Egwu said. “He really brings the energy and he has a knack for having other players feed off his energy, and that’s a great asset to our team.”

Although he played well, Black’s game against the Hoosiers wasn’t perfect. He missed a layup late in the second half with Illinois leading by a point. The Illini ended up losing by six.

But Black hasn’t let little things like that linger for long. He came back and played the best game of his young career in the next game against Purdue.

With Aaron Cosby out after tearing his left retina against the Hoosiers, Black was thrust into the starting lineup and he didn’t disappoint.

Against Purdue’s A.J. Hammons and Isaac Haas, Black had a career night, ending up with 15 points and 13 rebounds and helping the Illini beat the Boilermakers.

“I like to go against players that are bigger than me,” Black said. “It’s a challenge, and I like challenges.”

“The key to the game was Leron Black and Egwu,” Painter said. “Those guys were great.”

While Illinois couldn’t beat Minnesota on Saturday, Black kept up his intensity on the glass and grabbed nine rebounds.

Although his offensive production may dip again with injured teammates being worked back into the lineup, Black knows one part of his game won’t falter, even if the shots aren’t falling: his consistent energy and intensity on the court.

“His production is really big for us,” Egwu said. “Not just the numbers and not just by the stats, but by his energy and by his motor. He’s one of the biggest workers on our team and he’s going to continue to do that.”