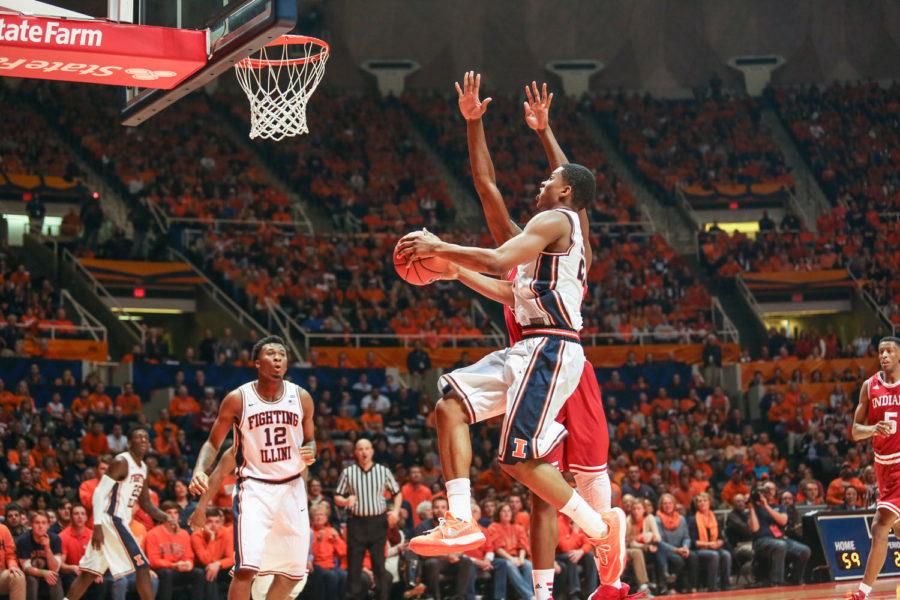 Malcolm Hill has emerged as a leader and point-scorer for the Illini men’s basketball in the absence of Rayvonte Rice and Aaron Cosby.

As Malcolm Hill caught the pass from Jaylon Tate and surveyed the defense at the top of the key, he knew he had a choice.

With two Penn State defenders closing in on either side of him, and his back to the basket, Hill decided to make his move. He didn’t want to settle for a fade-away jumper, so Hill took two dribbles to the left and turned the corner past Jordan Dickerson, the Nittany Lions 7-foot-1 center.

“I was just going to take what the defense gave me,” Hill said. “I didn’t want to just throw up anything, especially with two guys on me.”

As he moved toward the paint, Hill knew if Penn State’s Ross Travis moved over to help, he would dish the ball to Kendrick Nunn in the left corner. Travis stayed with Nunn and Hill’s thoughts jumped to finishing at the rim.

He accelerated down the left side of the lane with two more dribbles and rose into the air, taking the body contact he was expecting from Dickerson.

Hill laid the ball off the glass and backpedaled into the basket as it rolled around the left side of the rim before falling in.

“I give him a lot of credit,” Penn State head coach Patrick Chambers said. “He’s a heck of a player. When he needs to make big plays, he makes big plays.”

The basket gave Hill the two most important points of his game-high 27 on Saturday. His layup put the Illini up 60-58 with 4.4 seconds left, and that proved to be the final score. His performance earned him Big Ten Co-Player of the Week honors, which he shared with Michigan State’s Branden Dawson.

“Malcolm obviously was a monster for the most part at both ends,” head coach John Groce said.

Although it would be hard to tell from his play of late, Hill hasn’t always been assertive on the court. During his freshman year, Hill even had a hard time staying in the game.

A summer with strength coach Mike Basgier added between 10 and 20 pounds of muscle to Hill’s frame, which has helped him finish at the rim more consistently.

“Finishes like that, I probably wouldn’t have finished that last year,” Hill said of his final basket against the Nittany Lions.

Hill’s additional muscle has been evident from the start of the season, but his transition into a team leader has been more evident as of late.

After the Illini lost leading scorer Rayvonte Rice, Groce preached the importance of his “next man up” philosophy.

In the aftermath of Rice’s injury, Illinois was without a leader on the court — a role Hill actively took upon himself to help fill. Hill is averaging 14.6 points and 5.4 rebounds per game, but in the seven games since Rice’s injury, Hill’s scoring has jumped to 17.9 points per game.

“We knew from the start that Malcolm was that type of player,” Tate said. “It just takes things like Ray being out and Aaron being out for players to really blossom, and that’s what Malcolm has been doing. He’s turned into the player that we all knew he could be.”

In his last three games, Hill has taken his game to an even higher level offensively, averaging 21 points per game while acting as Illinois’ first option offensively.

There have been hiccups for Hill, who missed a crucial three and made a costly turnover in a loss to Indiana. But for the most part, he’s handled the added pressure well.

Instead of going away from Hill offensively, Groce continued to work the offense through him, no matter the situation. Against Penn State, Groce’s persistence paid off.

“We went in a couple different situations right back to him again,” Groce said. “Obviously we’re fortunate he’s delivered.”

Although he finished Saturday’s game with 27 points, four rebounds and an assist, Hill doesn’t want to give himself all the credit for the Illini’s 4-3 record without Rice.

“I’ve always tried to keep my confidence high, but I don’t want to sound like I’m putting the whole load of Ray and (Aaron Cosby) being out on myself,” Hill said. “We’ve all been doing a good job.”

Hill, as humble as ever off the court, added that his improved play is largely the doing of his teammates.

“My teammates have been making me a lot better, just keeping my confidence high,” Hill said. “Even if I have an off game, they still tell me to keep shooting the ball.”

With Rice nearing the end of his recovery and his return to the floor imminent, Hill will more than likely revert back to his role as a secondary option for the Illini. After stepping up to lead the team in Rice’s absence and putting up big numbers like he did against Penn State, Groce said Hill is in a position to elevate his game to the next level.

“He’s really taken advantage of those opportunities and done a really good job for us,” Groce said. “He’s a good one that has a chance to be great.”