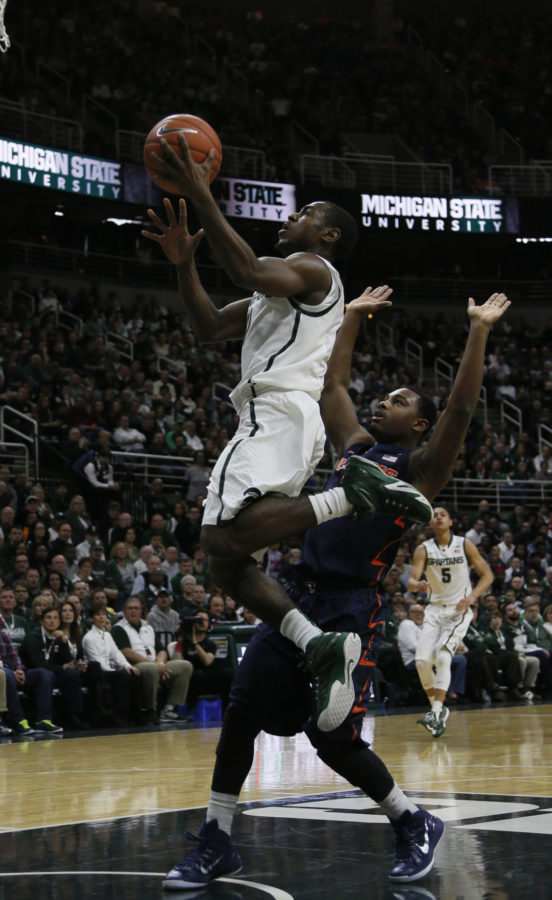 Michigan State's Lourawls Nairn Jr. drives by Illinois' Ahmad Starks for a score in the first half on Saturday at the Breslin Center in East Lansing, Mich. The Illini won, 59-54.

EAST LANSING, Mich. — Even during the flow of the game, where players sometimes lose track of details, Illinois guard Malcolm Hill noticed something amiss with Michigan State’s free-throw shooting.

“There were times where it seems like even the Michigan State players were surprised (at the misses),” Hill said. “I was surprised too.”

Yet, Hill — like most everyone Saturday in the Breslin Center — wasn’t exactly shocked when the Spartans whiffed on an opportunity to take control of the game late, leading to Illinois’ 59-54 victory.

After a controversial technical dead-ball foul on Illinois’ Jaylon Tate, as he attempted to box out on a free throw and backed into Spartans’ shooter Travis Trice, the Illini kept their composure as Michigan State’s shots rattled out. Bryn Forbes made only one of three free throws to pull within 55-54 instead of taking a lead with 33 seconds remaining.

“I was most proud of the way we responded to things like that throughout the game, the adversity,” he said. “We were able to make that next play and I was really proud of our guys.”

Hill made the final four free throws of the game to seal the victory, a second straight at Michigan State.

“We didn’t want to get hung up on the technical, whether it was the right call or not,” said Hill, who scored a game-high 19 points. “We’re road warriors. We did a good job of moving on.”

Illinois contested the last two Michigan State shots, including strong defense by center Austin Colbert off the bench on a shot by Denzel Valentine. For a team that has struggled to find consistency throughout Big Ten play, the Illini (16-8, 6-5) finally seem to be hitting their stride. They’ve won three straight games and recorded just their second road victory of the season.

It’s not lost on Illinois that the clock is rapidly running out.

“Late in the year, we feel a desperation,” Hill said. “Every game counts. We always say that in the beginning the season, but now the season is coming to an end and it really kicks in. Every game now really means a lot.”

Center Nnanna Egwu played one of his strongest games of the season with 12 points, nine rebounds, three blocks and only one foul. Guard Kendrick Nunn added 14 points.

On the technical foul, referee crew chief Terry Wymer cited a rule that prohibits “unnecessary, unacceptable and excessive” contact, noting that Tate backed into Trice in an “unnecessary manner and made contact” after the ball went through the hoop.

Illinois claimed the victory as a point of pride.

“Michigan State is one of those teams that plays so hard and so physical, if you’re soft they’re going to showcase that,” Egwu said. “To come in their building and play as hard as we did and as physical as we did was really good for us.”