Illinois women’s gymnastics comes through for win over Minnesota 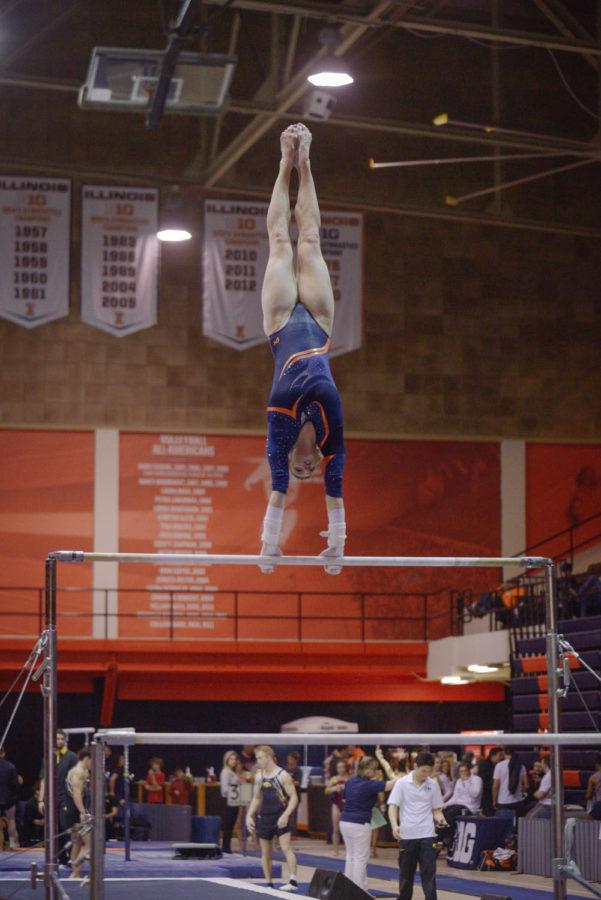 Illinois’ Mary Jane Horth performs a routine on the uneven parallel bars during the meet against Minnesota on Saturday.

Two falls on the balance beam weren’t enough to deter the No. 14-ranked Illinois women’s gymnastics team from achieving a 195.775-195.375 win over No. 25 Minnesota on Saturday night at Huff Hall.

Junior Giana O’Connor was the lead-off on beam. Right before her dismount, she fell during her leap-to-backflip connection. She lost her balance and tried to counter it, but she was no match for gravity.

O’Connor took the fall and paced a bit, with clear disappointment written across her face.

Illinois bounced back, though, with junior Heather Foley following her teammate with a 9.825. But then, sophomore Erin Buchanan fell on the first skill of her routine. Illinois still had no problem recovering from that with three scores at a 9.8 or higher to finish the rotation.

“Mental toughness is key, and you have to be able to overcome obstacles,” head coach Kim Landrus said. “We faced a challenge today on beam, and those last competitors really put it aside and went out and did their job.”

The Illini did have to count one fall on beam, Buchanan’s 9.275, but they still scored 48.650, which was still enough for them to maintain the lead they built from the start on vault.

Illinois built upon that lead with another strong bars performance. Each member of Illinois’ bars lineup scored at least a 9.8, but it was sophomore Mary Jane Horth’s 9.975 that put her team over the top. Horth’s score headlined the Illini’s 49.375 total on bars, a new season high.

“All of the girls before me went out, did their job, hit the scores that they needed to do,” Horth said. “That just gave me so much confidence going in and knowing I could just be aggressive and go for the routine that I knew I could do.”

The 49 on bars would be the only one for Illinois. The team failed to grab a 49 on floor. This came just one week after the Illini achieved a 49 on all events for the first time this season, as well as their season-high 196.400.

Illinois still came away with the win, though. Landrus and Horth were also both impressed with the performances the Illini gave Saturday, so the scores aren’t too concerning.

Ashley can be reached at [email protected] and on Twitter at @wijangco12.