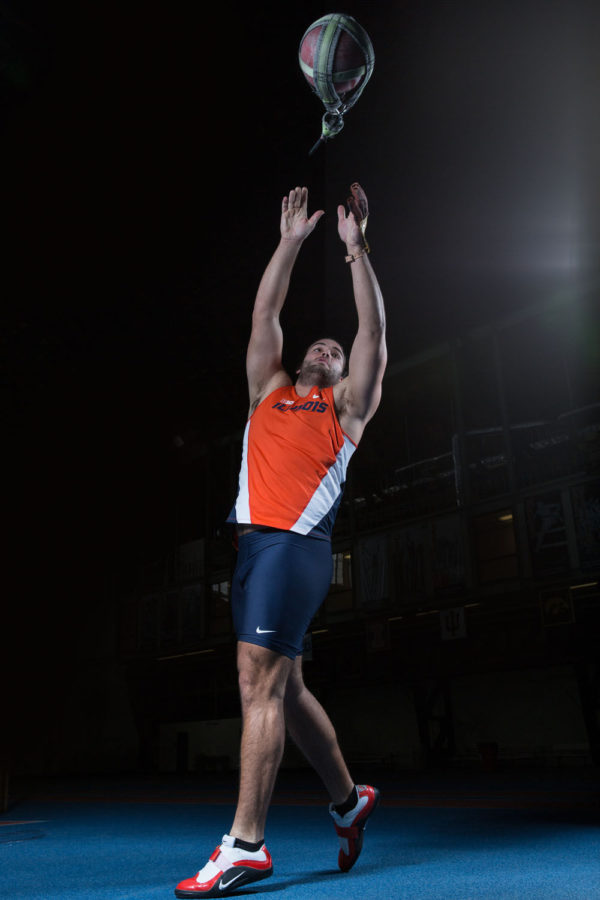 Few members of the Illinois men’s track and field team thought it would be a historic weekend when the team traveled to the Frank Sevigne Husker Invite in Lincoln, Nebraska, on Friday and Saturday.

Friday turned out to be an important day for Illinois senior Davis Fraker. Fraker broke his own indoor school record in the weight throw with a toss of 21.80 meters.

“I had some far throws in practice earlier in the week that were actually a little bit farther than what I threw in the meet,” Fraker said. “I was really excited to break through the barrier, something that I have been wanting to do since freshman year.” The Peachtree City, Georgia, native earned third-place honors on the podium in the event, despite breaking the school record. Conor McCullough of USC and Nick Miller of No. 17 Oklahoma State finished first and second, respectively.

According to head coach Mike Turk, Fraker’s record-breaking performance was one he believed was bound to happen.

“Davis had a great series with five throws over his personal best,” Turk said in a press release. “He has been consistently right under his best for a couple of weeks now. This was a huge breakthrough that has been a long time coming.”

As a senior, Fraker’s record-breaking performance is what he believes will help him leave his legacy at Illinois. It’s also something he can look back on when all is said and done.

“It is thrown with the exact same technique as you would (use) on Donkey Kong for throwing the hammer,” Fraker said. “I feel like that is what most people know it as. I spin around three times, release it and hopefully it goes far.”

“Big Tens is ridiculously strong in the weight throws,” Fraker said. “Right now, I think I’m seventh in the nation and fourth in the Big Ten, so there are so many good guys in the Big Ten. I’d like to see if I could go in there and mess somebody up and maybe get on the podium stand. And then maybe go to Nationals and see what I can do there.”

Not only is Fraker excellent at his craft, but he’s an excellent teammate. Senior Corey Hammon said Fraker will be missed after the season because of the support that Fraker has shown him in various events, along with all that he does for the team. Most importantly, the team will miss Fraker’s positive attitude.

“He’s just fun to be around,” Hammon said. “He’s a really good guy and he brings some excitement and some fun to the practice and meets.”

Turk called Fraker a “special athlete,” not only because of his talent, but also because of how fun he is to work with. He went on to say that there is always a partnership between coach and athlete, which is shown through how hard the athlete works for the coach. For Fraker, the hard work is paying off and history is being made in the process.

“They can do things that other people can’t do,” Turk said of athletes like Fraker. “You can learn a lot from them. I’ve learned a lot about the events, some different things that (Fraker) can do that some other athletes can’t and that’s been fun.”