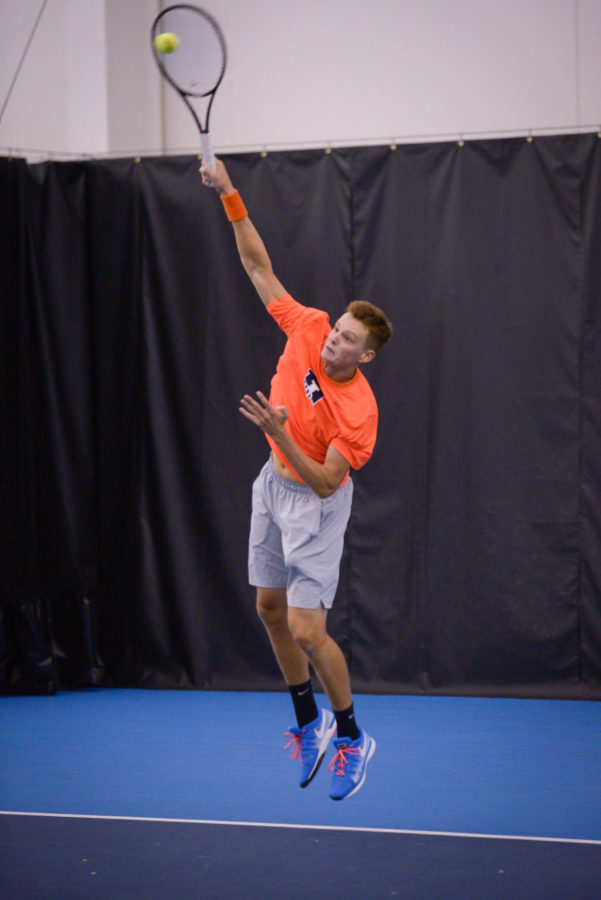 Illinois’ Brian Page serves the ball during the match against Kentucky at the Atkins Indoor Center on Feb. 6. The Illini won 7-0.

The Illinois men’s tennis team has already played three top-10 teams this season: Baylor, Duke and North Carolina. They’ll get a chance to take on the other seven, as well as several other top-flight opponents at the ITA National Indoor Championships this weekend at Chicago’s Midtown Athletic Club. The Illini will host 16 of the nation’s top programs in Chicago for a chance at their first indoor national championship since 2004.

The Illini’s rigorous early-spring schedule should have them well-prepared for Chicago. The team took down Baylor in Waco, Texas, in its first dual meet of the season and split back-to-back matches against Duke and North Carolina. They also had dominated wins against Kentucky, a team that has qualified for indoor nationals four of the last seven years, and Big Ten foe Purdue.

“When you look at our schedule, we’re playing enough good teams,” Dancer said. “Everybody there knows what’s coming, it’s not like there’s going to be any surprises.”

Not only have they faced elite competition, but the Illini have also dealt with quick turnover between matches. If the Illini win their first round match, they could end up playing four matches in four days. The Illini have played three sets of back-to-back matches, including a doubleheader after the trip to Baylor.

With the potential for fatigue, Dancer said one of the Illini’s biggest advantages is their depth. Illinois has used a different lineup in each of its seven dual matches. Teams are allowed a roster of nine for the tournament, so things could be changed down the line.

“If some guy’s overly sore or can’t go Saturday, we should be fine,” Dancer said. “We’ll plug a new guy in and go from there.”

Another promising sign for Illinois is the progress of Brian Page. Page had his best weekend of the season against Kentucky and Purdue, and Dancer credited him with setting the tone in doubles. In the Illini’s lone win at last year’s indoor nationals against Pepperdine, it was the same way. Dancer said Page deserved credit for leading the charge in both singles and doubles.

Page said experience will be key for the team’s success. He’s a junior, and last year was the first time his class played at indoor nationals. With that experience and another year of play in the NCAA Championships, Page said the team knows what to expect.

Last year, No. 10 Illini lost their first-round match to Oklahoma. Illinois came back and dominated Pepperdine in a 4-0 shutout win, but then fell to Texas A&M.

This year, the Illini are hosting the event in Chicago for the first time since 2009. While the other 15 teams have to qualify, the Illini received an automatic bid to the tournament. Page said it will feel like a home meet, especially with so many team members from the Chicago area.

“The biggest thing for us is playing in Chicago … playing in front of all of our Chicago fans.” Dancer said.

The Illini will face No. 13 California in the opening round. California is undefeated but hasn’t faced the same level of competition that the Illini have, with its best wins coming over No. 28 Mississippi State and No. 30 Harvard at home for their ITA Kickoff Weekend. The Golden Bears are making their fourth consecutive appearance at Indoor Nationals, and had their season ended last year in the Round of 16 at the NCAA tournament.

Dancer said the preparation for the Illini is all but over.

“Once you go there, you try and get a feel for the courts, try to figure all that out,” Dancer said. “Try to get the guys in the right mindset, make sure their bodies are there, and then it’s time to play.”

Chris can be reached at [email protected] and on Twitter @ChrisKennedy_4.