Beyond Coal hosts “Break Up With Coal” event 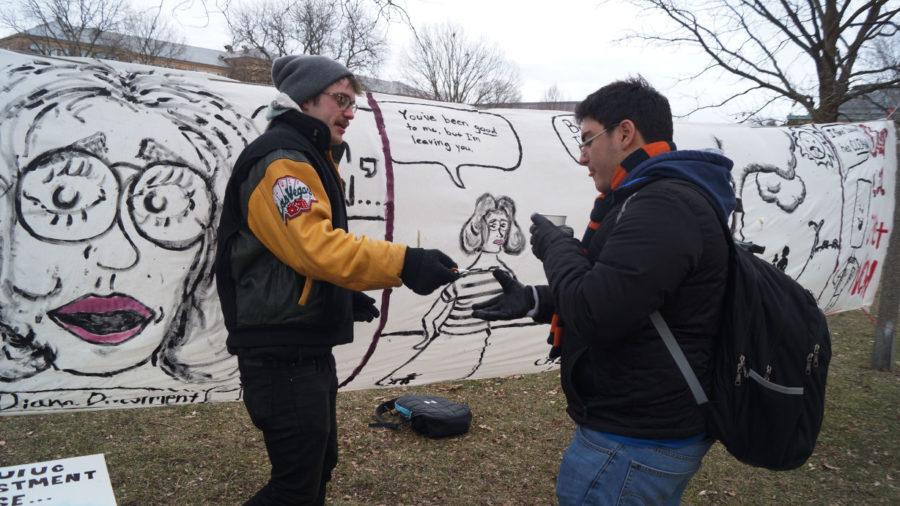 Beyond Coal held its "Break Up With Coal" event on the Quad Friday to raise awareness about its campaign regarding the University's coal divestment.

The University student organization Beyond Coal staged a “Break Up With Coal” protest on the Quad Friday. The group serves to urge the University’s divestment from coal, as part of a nationwide effort to promote responsible investment.

The “break up” theme was meant to play on Valentine’s Day and catch students’ attention. With love in the air, the Beyond Coal organization made it very clear that they would no longer like to have any relationship with the University’s investment in coal. As students crossed the quad, many stopped for hot cocoa and chocolates, but also learned about Beyond Coal’s campaign.

Erika Weir, Beyond Coal president and junior in LAS, said Friday’s event helped raise awareness and cleared up misconceptions about the University’s divestment from coal.

“A lot of people had thought we had already divested coal because of the student referendum from last year,” Weir said.

In the November 2013 referendum, 1,730 out of the 2,020 students who voted said they wanted the University to divest from coal.

The group explained to students that using coal causes both health and environmental risks, especially for communities located near coal-fired power plants. These risks included higher rates in asthma and respiratory illnesses, as well as groundwater contamination and air pollution.

Weir also commented on the Illinois Climate Action Plan, which contains a pledge from the University to stop burning coal at Abbott Power Plant and to be carbon neutral by 2017. However, when the registered student organization Students for Environmental Concerns toured Abbott last semester, Weir said they found little changes were being made.

“No one working at the power plant had actually heard of the University taking any action in making the pledge a reality,” Weir said.

The event also featured a wall-sized cartoon painted by Chris Rost, senior in LAS. The illustration symbolized the effects of coal investment and the transition into clean energy sources.

In front of the illustration, students passing by could pose with a sign, featuring the slogan, “I support UIUC coal divestment because…”

“I support UIUC coal divestment because … student empowerment paves the way to a more just future,” wrote Peter Whitney, Beyond Coal member and senior in ACES.

Hannah Gutierrez, freshman in LAS, said the University has shown it cares about energy goals and issues with its plans for a solar panel farm.

Though the solar farm will provide a small amount of energy, Gutierrez said she was pleased with the University’s progress on the issue. The University will begin construction on the solar farm this spring and it will be located along the south side of Windsor Road, between First Street and the railroad tracks.

Weir said in general, most of the student body is supportive of environmental issues.

“Making this relevant to them and making them realize that it is an issue on our campus which we can work on is very powerful, and people were very supportive,” she said.

Cary Shepherd, director of communications for Beyond Coal and senior in LAS, said it was encouraging to see students who did not realize what the group was promoting join the event to get their picture taken and petition for the cause.

“The most important thing we learned today was that the student body is very much so behind this movement,” Shepherd said. “The more we can educate people about why this is important, the more we can continue build to on that.”

Liz can be reached at [email protected]