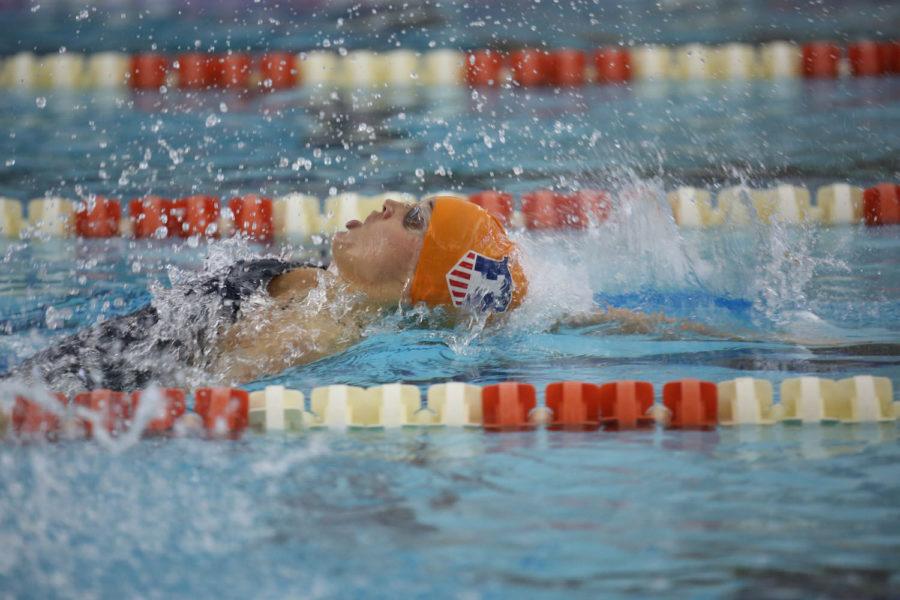 Illinois’ Alison Meng swims the 100 yard backstroke event during the meet against Nebraska at the ARC on Jan. 24. This will be the final Big Ten championship event for the senior.

It’s been a while since the Illinois swimming and diving team has competed, but the team hasn’t relaxed during that time.

After nearly three weeks off from competition, Illinois will head to Columbus, Ohio, on Wednesday to compete in the Big Ten Championships, which runs through Saturday.

The Illini posted a dual meet record of 2-2 against conference opponents this season, losing to Northwestern and Iowa and defeating Nebraska and Michigan State.

Illinois will compete against six nationally-ranked teams, including No. 14 Minnesota, No. 15 Indiana and No. 17 Michigan.

“We have our team identity, and when we remember that and stay true to that, we compete the best,” head coach Sue Novitsky said. “They have all competed in big competitions before and this is no different.”

One of Illinois’ main goals in the Big Ten Championships is to break records. The Illini likeliest to break records are freshman Samantha Stratford and senior Alison Meng, who have found their names consistently in the record books.

At last season’s tournament, Meng set school records in the 50 backstroke, the 100 back, the 200 medley relay and the 400 medley relay.

“I’ve accomplished more than I ever thought I could,” Meng said about her time at Illinois. “I’ve wanted to make the NCAA meet since my freshman year, but if I don’t this year, at least I know I did all I could to try to make it.”

Meng said this year’s team has the potential to put up the best results in her four years at Illinois.

Recently, the team has been resting as much as possible in order to prepare for the four-day competition.

“A lot of our meets this past January have been late morning when prelims will be competed,” Novitsky said. “So those meets were good rehearsals for the athletes to be in the mind frame of swimming fast in the morning.”

Regardless of how much the team has rested or endurance trained, Novitsky said there is still an accumulation of fatigue that can’t be ignored.

Reigning Big Ten champion Minnesota finished last year’s meet with a total score of 760. The Illini finished in last with 76.