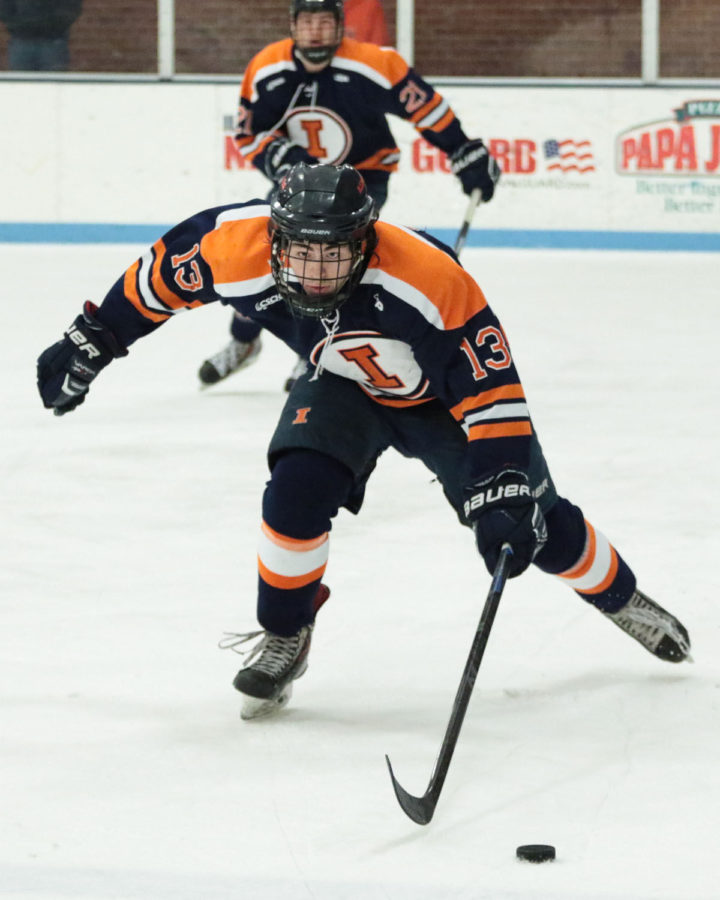 The Illini sang along to the victory song after Friday night’s 2-1 overtime win over Iowa State. Saturday night, no tunes were heard from the locker room, but “Sad Sad City” is an appropriate way to describe the setting after Ohio beat Illinois 5-3 to knock out the Illini in the CSCHL tournament at the Illinois Ice Arena.

In the quarterfinals, the fourth-seeded Illini (22-16-1) faced No. 5 Iowa State (21-14-5) and scoring was sparse. Illinois managed to tie the game 1-1 early in the third period to force overtime. In overtime, Illini forward Matthew Flosi’s intended pass for forward Eric Saulters deflected off Iowa State’s goaltender Matt Cooper’s stick and snuck in to win the game.

The win improved Illinois’ Friday home record to 10-0-0, and the Illini advanced to a CSCHL semifinal game against regular season conference-champion Ohio.

Against No. 1-seeded Ohio (26-6-5), Illinois had a 2-0 lead after what coach Nick Fabbrini considered one of the Illini’s best first periods all season. Illinois failed to carry momentum into the second and third periods when Ohio scored five unanswered goals before Illinois could get back on the board.

Fabbrini thought discipline and immaturity were the deciding factors for Illinois this weekend.

“We need to be able to play regardless of what’s going on in the game or what somebody said about us,” Fabbrini said. “Having the last word doesn’t really mean a whole lot in the grand scheme of things. Responding with your play is generally the best way to do it.”

On Friday, Cooper had been trash talking with Illini players throughout the game. Illinois responded with consistent play and forced the game into overtime. Saturday, Illinois fell apart and seemed to get caught up in the officiating and Ohio players more than the game itself.

On Saturday, Illinois had five power play opportunities but had no success. Ohio had six chances and scored on two.

Winger James McGing said he thought Illinois came out of the first period too overconfident, and the Illini’s special teams was a key contributor to the loss to rival Ohio.

“I’m pretty pissed off because it’s Ohio, but at the same time we can only be mad at ourselves, because we had the game, we just kind of beat ourselves,” McGing said.

For Illinois, the goal for the tournament was to be playing for the CSCHL championship on Sunday. Instead, Lindenwood (16-14-2) and Ohio squared off Sunday. Lindenwood beat Ohio 3-2 to win its second straight CSCHL tournament.

“Everyone knows we can beat all of these teams,” McGing said. “We do this far too often. We get a lead or get too confident. We’re two different teams depending on what day of the week it is. I don’t know what’s wrong with Saturdays.”

Illinois is 5-5-0 on Saturdays at home. As for now, the Illini have a week to figure out why it has been “Sad Sad City” for them on Saturdays before Eastern Michigan comes to town for senior night.