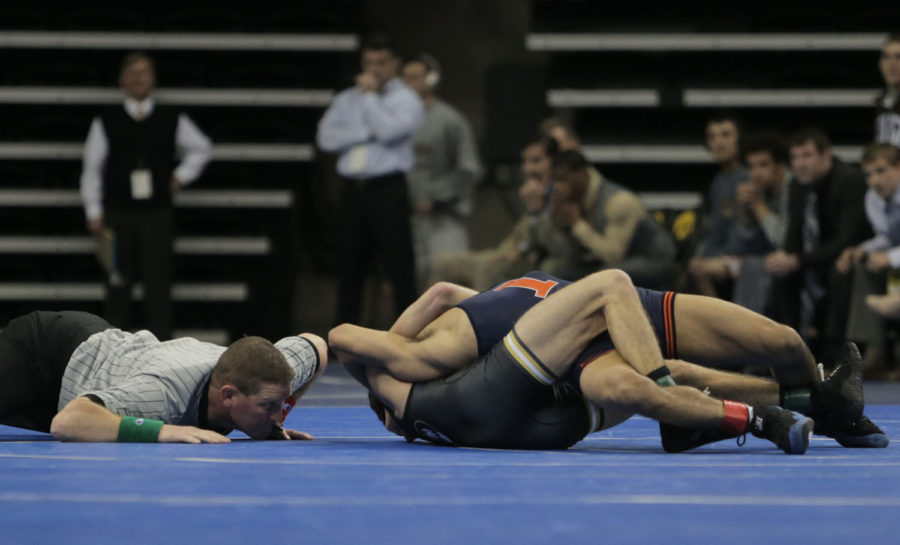 Illinois wrestling’s five-meet winning streak came to an end Saturday in Iowa City, Iowa, as the No. 2 Missouri Tigers proved to have too much talent for the No. 5 Illini grapplers. Despite only winning 23-13, the Tiger’s slimmest victory of the season, Missouri’s loaded lineup withstood an early Illini push and added a late surge of their own to claim a tight victory.

“Overall, I thought we wrestled OK,” head coach Jim Heffernan said. “We had some good performances, but we let a couple get away that — had they been turned around — could have changed the meet.”

The first action of the afternoon was arguably the most anticipated matchup of any quarterfinal meet. In the 125-pound bout, Illinois’ undefeated and defending national champion, No. 1-ranked Jesse Delgado, was pitted against Missouri’s undefeated, 2014 fourth-place NCAA finisher, No. 2-ranked Alan Waters.

By far Delgado’s toughest opponent during his injury-shortened season, Waters took advantage of the fact that Delgado had not faced a top-25 wrestler prior to Saturday. After jumping out to a commanding 5-0 lead after the first two periods, Waters ultimately won the match 6-2, giving Delgado his first loss in 23 matches.

“There’s nothing to read into Jesse’s loss,” Heffernan said. “It was just the No. 1 and No. 2 guys in the nation going at it. They both had good moments in the match, Waters just got the best of him this time.”

After freshman Kyle Langenderfer suffered a 6-3 loss to Missouri’s No. 1 Drake Houdashelt in the 149-pound match, the Illini found themselves in a 10-3 hole nearing the halfway point of the meet. It was up to Illinois’s talented middleweights to pick up the slack.

In the next two matches, undefeated 157-pound freshman Isaiah Martinez registered a 17-6 major decision win over Joseph LaVallee and 165-pound senior Jackson Morse pulled out a close 4-3 victory over Missouri’s Mike England to tie the match 10-10.

However, the following match would turn the tide in Missouri’s favor again, this time for good.

The 174-pound bout was the only match besides Waters vs. Delgado that included two top-six individuals, with Illinois’ No. 6 sophomore Zac Brunson facing Missouri’s No. 5 John Eblen.

The wrestlers’ rankings turned out to be the only thing close in the match, as Eblen pinned Brunson 55 seconds into the first period, giving the Tigers a 16-10 lead.

“(Brunson) was doing the right things,” Heffernan said. “He was going for his leg, trying to finish, but the guy just had really good defense. (Brunson) just got caught on his back. It was not a result of a lack of effort or skill.”

No. 19 sophomore Nikko Reyes’ 3-1 overtime victory over Missouri’s No. 12 Willie Miklus provided the only points the Illini would score the rest of the meet, as junior Jeff Koepke and freshman Brooks Black both fell in their respective matches.

The dual meet season is now over for the Illini. They will now shift their focus to the Big Ten Championships. The Illini will have two weeks of preparation prior to the event in Columbus, Ohio, where Illinois will pursue its first conference title since 2005.

“We still have some skills we need to work on along with our health,” Heffernan said. “They’re both very important at this point. These guys could use some time off; they’ll actually get to be college kids a couple days for once.”

Ethan can be reached at [email protected] or on Twitter @EthanSwanson88.