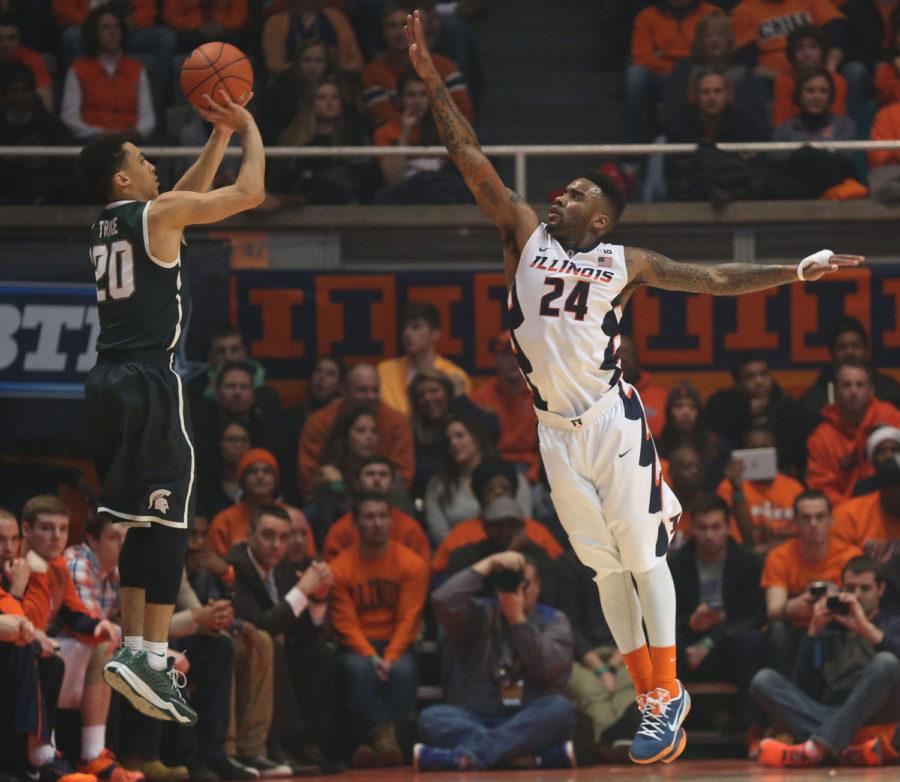 Illinois’ Rayvonte Rice attempts to stop Michigan State’s Travis Trice from making a three during the game against Michigan State on Sunday. The Illini lost 60-53.

The road won’t get easier just yet for the Illinois men’s basketball team.

After playing in one of its most physical games of the season over the weekend, Illinois (17-10, 7-7 Big Ten) will travel to Carver-Hawkeye Arena for an 8 p.m. tip Wednesday night against an Iowa (17-10, 8-6) team that is just as aggressive as the Illini.

“I anticipate it being another very physical game,” head coach John Groce said. “They’re great on the backboard. We’re going to have to get the job done there.”

Groce compared Iowa to Purdue in the sense that both teams are predominately made up of taller players. The Hawkeyes start three frontcourt players 6-foot-9 or taller and a shooting guard who is 6-foot-6.

“Their size around the basket is impressive,” Groce said.

The Illini have recently started a lineup in which only one player, Nnanna Egwu, stands taller than 6-foot-9.

Illinois had success against the Boilermakers earlier in the season, but Iowa is better than Purdue at capitalizing on its height. The Hawkeyes are first in the Big Ten in offensive rebounds and fifth in the conference in defensive rebounds this season.

Iowa has also been riding a hot streak lately. The Hawkeyes are coming off 33- and 28-point victories against Rutgers and Nebraska, respectively, in each of their last two games.

Despite the Illini shooting an anemic 28.8 percent from the field in Sunday’s loss to the Spartans, Malcolm Hill said he isn’t worried about the team’s recent offensive woes.

After being involved in last season’s late tournament push, the sophomore guard knows that Illinois’ defense, not its offense, is key to securing a tournament berth.

“We just need to pick it up on the defensive end,” Hill said. “Defense is the reason we almost got to the NCAA tournament last year and it’s another reason why we have a chance to get back there this year.”

Groce added that the Illini have to continue working on their passing and screening on the offense end.

“It’s our shot and we have to work really hard to get our shot,” Groce said.

Neither Hill nor senior guard Rayvonte Rice seemed worried about Illinois’ shooting struggles continuing — Rice said he’s getting more comfortable with every game since his return from suspension on Feb. 12.

Rice said that stopping the Hawkeyes, and the other three teams left on the Illini’s schedule will come down to stringing together good defensive possessions.

Illinois is currently eighth in the conference in field goal percentage defense, a statistic the Illini will need to improve upon in the final four games of the regular season.

While Illinois needs to improve on both the defensive and offensive ends moving forward, Hill added that the Illini will need to keep up the intensity for the remainder of the season if the team wants to make a run at an NCAA tournament bid.

“If we take the same physicality from this game to the rest of the season, I think we can be really good,” Hill said after playing Michigan State.