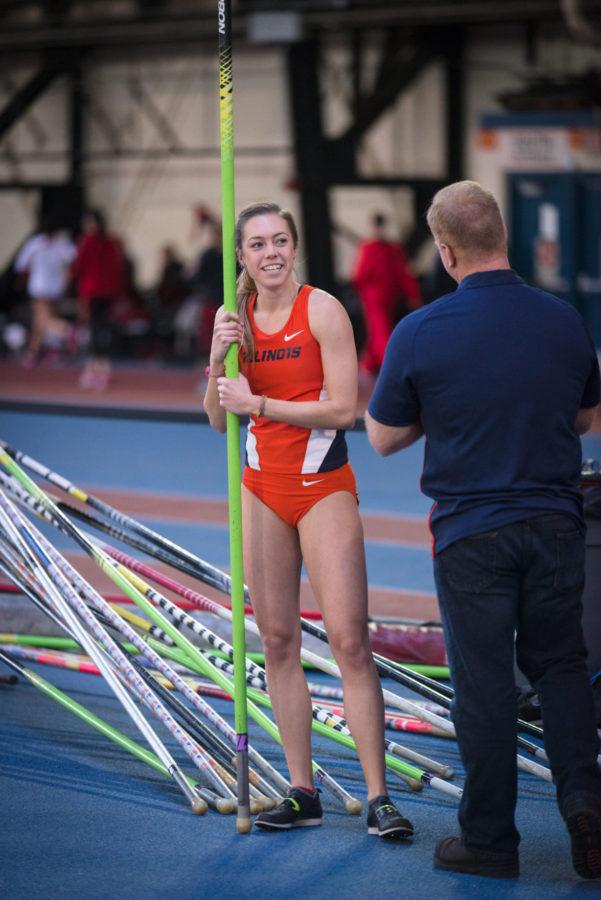 Illinois’ Stephanie Richartz smiles as she acknowledges her record-breaking pole vault height of 4.38 meters at the Armory on Saturday, February 21, 2015. The Illini came in first with 216 points, followed by Northern Illinois with 122.

Illinois women’s track and field senior Stephanie Richartz would be the first to tell you that she never had track and field in her mind when she chose to attend the University of Illinois. But after deciding to walk on the team as a freshman, her attitude towards the sport changed.

Richartz didn’t even know what pole vaulting even was until high school.

“My dad urged me to try track and field in high school, and once the coaches found out I had experience in gymnastics, they asked me if I wanted to learn to pole vault,” Richartz said. “I thought it looked like a cool event to do, so I gave it a try.”

At Carmel Catholic High School in Mundelein, Illinois, Richartz said she was a “mediocre” athlete at best, even though she holds the school record for the pole vault and was a state finalist in the event in 2010. Coming out of high school, she wasn’t recruited to compete at the next level. Accepted at Illinois during her senior year of high school, Richartz headed to Champaign in the fall of 2010.

As a freshman on campus, Richartz never thought sports were in her future. After talking it over with her parents and high school coach, she decided to walk onto the team. Since then, she has said the decision was the best she’s ever made.

Of her first three seasons on campus, Richartz’ junior season was her best — she won the pole vault at the Illini Classic and earned runner-ups at both the Husker and SPIRE Invitational. Her postseason was more impressive, though: she won her first Big Ten Indoor pole vault title en route to her team’s first Big Ten championship since 1996. Richartz then placed eighth in the pole vault at her first NCAA Indoor Championships and ended the season as a first-team All-American. Prior to her junior year, Richartz had finished fifth and second at the Big Ten Indoor Championships.

Entering what was to be her senior year, Richartz suffered an ankle injury — a bone bruise and severe sprain — that took longer to heal than expected. Richartz eventually decided to redshirt.

“Once the decision was made that I would be redshirting the season last year, it enabled me to not feel rushed in my recovery and to take things slow,” Richartz said. “I spend more time in a week in the training room getting treatment than I normally did in practice. It also allowed me to conquer the mental challenges of the recovery.”

Richartz’s return from injury is soon to come full circle: she is preparing for the Indoor Big Ten Championships in Geneva, Ohio, this weekend.

Not only is Richartz terrific on the track, junior Jennifer DeBellis and distance coach Scott Jones both agree she is a great teammate.

“She offers a lot of unique advice that has really helped me along in my own college track career,” DeBellis said. “Steph is also always concerned about what is best for the team, and has gone the extra mile to help out many of us.”

Jones added that Richartz is “like another coach at our meets,” always helping others on the team who compete in the same event. It’s something Jones said he loves to see out of one the best pole vaulters in the country. Four years ago, even Richartz wouldn’t have predicted she would be where she stands today: a leader and a successful Division 1 athlete.