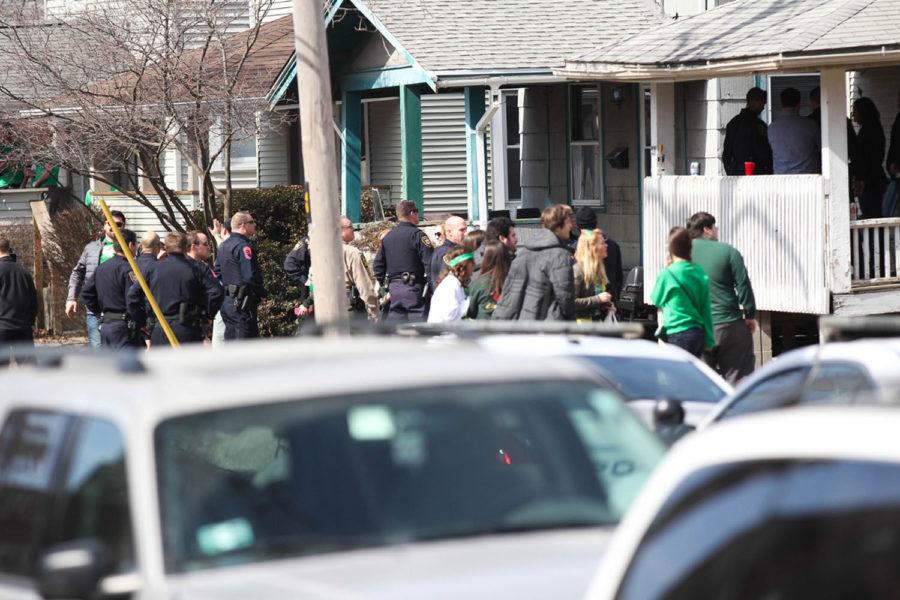 Sitting in a dark car at 10:00 p.m. Saturday night, members of the Party Patrol division for the night prepared to start their shift.

As Angela Annarino, sophomore in AHS and LAS, started the car, Alex Tran, junior in LAS, turned to her and asked, “How many calls do you think we’re gonna get?”

“Well, let’s see … it’s a Saturday. Midterms are still going on … I feel like it might be a decent night. I’ll say four,” said Jackson.

Tran nodded, adding, “I’m going to go in the middle. I’ll say three calls.” Annarino pulled the car out of the lot, and the night of patrol began.

This is the start of a typical night for the University of Illinois Police Department Party Patrol, a branch of the department’s Student Patrol that began over 20 years ago.

The Party Patrol is a community policing effort that was set up to respond to noise complaints.

“We created the program to eliminate the bringing of an officer off the street to deal with a loud party,” said Ryan Johnson, security coordinator at the Division of Public Safety.

When the Party Patrol responds to a call, they speak with the leaseholder of the apartment and issue a verbal and written warning.

They do not issue citations. Only the police are allowed to issue citations, and they will not be called unless there is a second noise complaint at the same location.

“It’s a warning system,” Johnson said. “It’s supposed to be there to help the student.”

Tran joined Student Patrol four semesters ago in order to help his fellow students. The Student Patrol’s duties include Safe Walks, Party Patrol and bar closes, which all make sure students get home safe and receive the help they may need.

The Party Patrol generally operates from 10 p.m. to 3 a.m. every Thursday through Saturday night.

“Anytime I can help someone, I’m happy,” Tran said.

Members of Student Patrol rotate shifts on Party Patrol on the nights that it operates.

In Tran’s time as a member, he has experienced the various ways students respond to the Party Patrol. He recalled one instance of a young man found lying on the ground.

“He turns out to be very aggressive with us, cussing at us, swearing at us, so we followed procedure and got an officer there to check him out and make sure he was okay,” Tran said. “The kid ends up running from us, and the cops, climbs on top of the roof.”

In the end, the man was arrested and the ordeal lasted over an hour and a half, Tran said.

Luckily, Tran said, most of the time students comply with the Party Patrol, to which Johnson agreed.

“The good news is that over 90 percent of the time, people are going to comply,” Johnson said. “They don’t want the police to come back, and they don’t want a $325 ticket.”

It helps, too, that the Student Patrol uniforms resemble police uniforms, said patrol member Daniel Endres, senior in LAS. The vests are black with “Student Patrol” written on the back.

“It blatantly says ‘Student Patrol,’ but if you’re intoxicated you’re just going to be looking at the general appearance,” Endres said.

Jack Carrera, junior in LAS, knows what it is like to deal with the police showing up at a party. Last fall, the police were called to his house for a noise complaint during a party. He said the cops were not disrespectful toward him, but they were very firm. Although nobody at the party faced repercussions, Carrera said the ordeal was “very scary.”

“We have three shifts for Unofficial,” Endres said. “It was kind of surprising to be working throughout the day, just seeing what we see at night during the day. Other than that, it was nothing too drastically different from a regular weekend.”

Tran said the purpose of Student Patrol on Unoffical is to “fill the gaps” and provide extra eyes and ears to the police.

Johnson said local police already have “multiple agencies at the local level, the state level and even at the federal level” that deal with Unofficial.

“We have a lot more uniformed officers, a lot more people patrolling the campus, there’s a lot more plain clothed undercover officers,” Johnson said. “Obviously it’s one of those things we wish we didn’t have to deal with, but we do.”

Johnson said the program benefits the community in three different ways: it provides relief for the people who issued the noise complaint, it keeps the police on the streets patrolling and it allows the students a chance to avoid trouble.

“For me, it’s a win-win for everybody,” Johnson said.