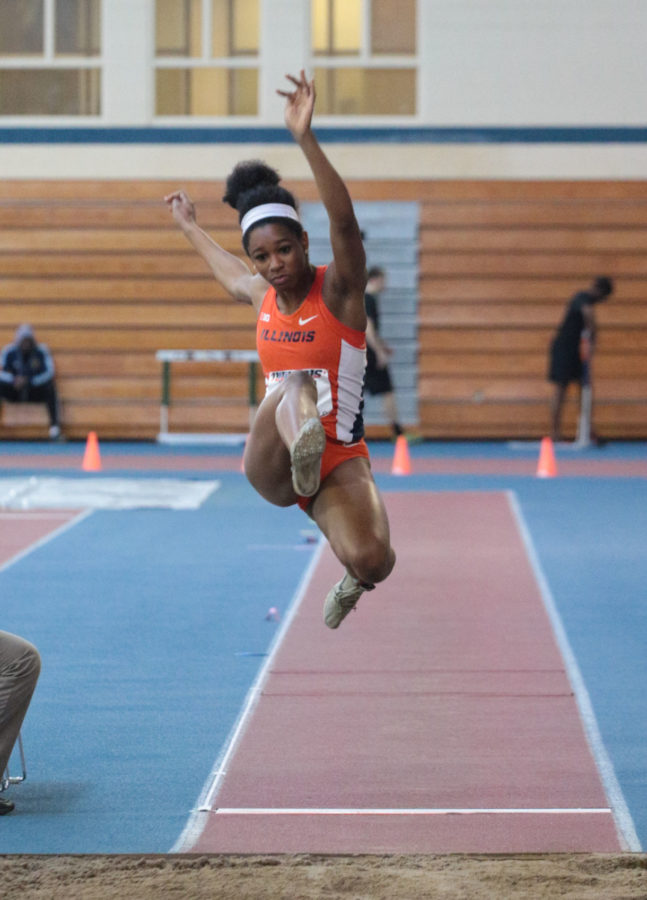 Illinois' Janile Rogers attempts to go the distance on the long jump event during the Orange & Blue meet at the Armory on Saturday, Feb. 21, 2015. Illinois' women's team won 1st place out of 5.

With Friday’s Indoor Big Ten Championships looming, the Illinois women’s track and field team is aiming to rebound from last year’s ninth-place finish at the event.

The championships will be held in Geneva, Ohio. Sophomore Kandie Bloch-Jones is the team’s lone returning individual conference champion.

Even though the field was not as strong as other events the Illini have participated in, senior Mariah Smith said the meet was a leap in the right direction and made her excited for this weekend.

“This will be my final opportunity to throw the weight as an Illini (during the indoor season), so it is both exciting and very meaningful.” Smith said.

Smith won the weight throw at the meet with a toss of 17.5 meters at the Orange and Blue Open.

Bloch-Jones won the high jump at the meet, reaching 1.75 meters, but said that the week of preparation for Big Tens has not been that great.

“Practice hasn’t gone very well, but it’s good to get the bad jumps out of the way before Saturday,” Bloch-Jones said. “I am mainly focusing on the mental approach as well as my steps leading up to the bar.”

The Illini go into Big Tens with a young team — 11 seniors and juniors to 24 sophomores and freshman — and the underclassmen have a range of emotions about the meet.

One of those sophomores, Bloch-Jones, is far from content, despite having an indoor Big Ten championship already under her belt.

“It is great to have started my career really well, but what comes with that is more goals,” Bloch-Jones said. “I feel as if I need to continue to improve or else I won’t be satisfied.”

Janile Rogers is one of the freshman who won last Saturday and said she’s looking forward to competition this weekend, but is anxious about the meet.

“This weekend I am very excited, but very nervous at the same time,” Rogers said. “I can overcome the butterflies, by staying calm and focused right before my races.”