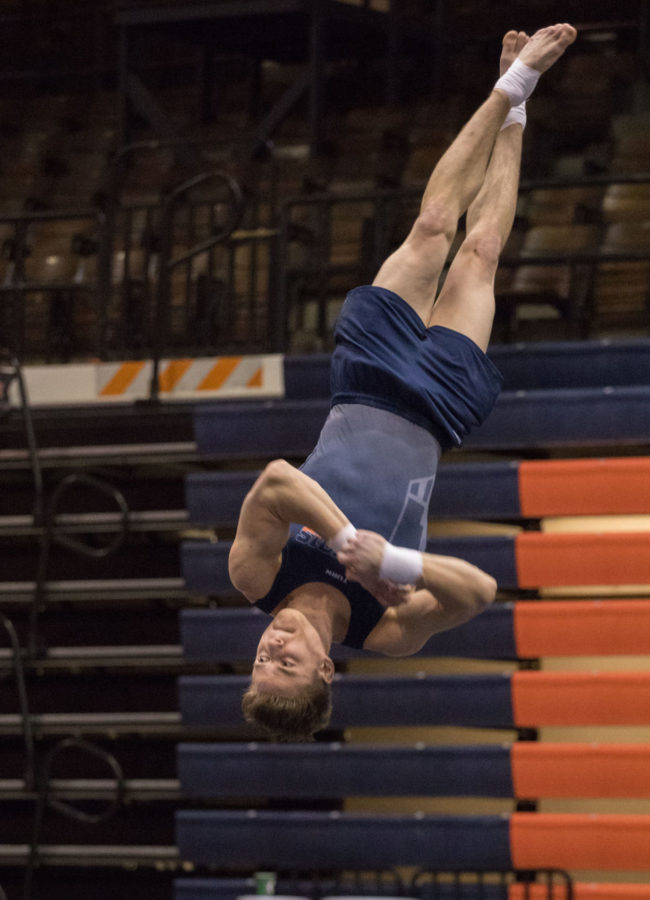 Despite being away, not much has changed since the Illinois men’s gymnastics team last competed.

On Feb. 14, then-No. 3 Illinois, without its best gymnast, faced an undefeated team in a match with national implications. In that match, it knocked off then-No. 2 Penn State at Huff Hall.

Friday, the No. 2 Illini travel to Norman, Oklahoma, to compete against undefeated No. 1 Oklahoma. Illinois and Oklahoma are the last undefeated teams in the country.

In its meet against the Nittany Lions, Illinois was without NCAA All-American C.J. Maestas, who was battling strep throat. While he is scheduled to compete in the floor exercise against Oklahoma, odds are that Maestas will be left out of all the other events unless his fitness shows major improvement.

Maestas did perform this past weekend at the Winter Cup for a chance to make the U.S. National Men’s Senior Team. However, he came up short — sitting out the last day of competition from fatigue, shoulder discomfort and lack of training.

Since his training is still not at the level that head coach Justin Spring desires, overloading and pushing Maestas to compete is not in the game plan.

“You can play a game of basketball at 60, 70 percent. You might be running slower but will still be able to make some plays and handle yourself,” Spring said. “If you’re not at 95 percent or above in this sport, you can’t do gymnastics.”

With Maestas unable to contribute as much as he usually does, the Illini will turn to freshman Bobby Baker to be the team’s sole competitor in the all-around competition.

Even though Baker has consistently competed for the all-around title this year — he set the third-highest all-around score in team history in the meet against Penn State — Spring suggested that the staff might be limiting his workload after this weekend.

“If at any time he’s hurting and looks like he’s getting burnt out, a break must happen,” Spring said. “I’ll throw a meet before I damage his ability to continue what he’s done in postseason.”

Friday will be his second competition against a highly ranked, undefeated team and Baker said he feels more mentally prepared to deal with the pressure.

While many members of the team have competed in high pressure situations before, senior Jordan Valdez said they can’t prepare too much for a big event.

“This will be another great test of the team’s mental strength and willingness to compete against a top tier gymnastics team,” Valdez said.