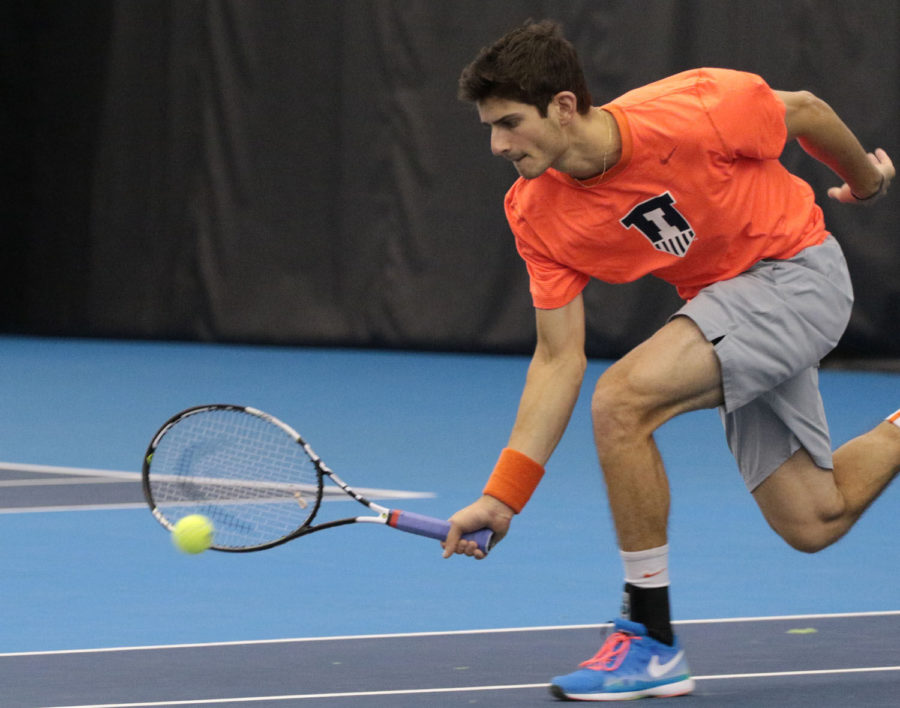 Illinois’ Jared Hiltzik attempts to save a short ball during the tennis game vs. Northwestern at Atkins Tennis Center on Feb. 20. Hiltzik won twice on Saturday — once against Valparaiso and once against Notre Dame.

The Illinois and Notre Dame men’s tennis teams see a lot of each other. The teams have played every year since 1974, and in each of the last 10 years, the home team has come out on top. That streak came to an end on Saturday, as the No. 3 Illini took down the No. 14 Irish in a back-and-forth match in South Bend, Indiana.

The Illini dropped the doubles point, but came through in singles play to claim the victory. The clinching point came down to freshman No. 67 Aron Hiltzik on Court 5 in the only three-set match of the afternoon. Hiltzik lost a hotly contested first set in an extended tiebreaker 6-7 (6-8) to Notre Dame’s Nicolas Montoya. But Hiltzik wasn’t fazed, and went on to dominate the next two sets, taking Montoya down 6-0, 6-0. It was an impressive showing by Hiltzik to claim the match for Illinois.

“I’m proud of him. He didn’t play a great first set and just got right back on it,” head coach Brad Dancer said. “Great resiliency by him, great toughness by him.”

Aron’s brother No. 19 Jared Hiltzik tied the match up at three with a victory over No. 102 Josh Hagar in second singles. Jared won the first set 6-4, and then claimed the second with a tiebreaker, 7-6 (7-4), to put his brother in position to win the match. It was the second win of the day for Jared — he claimed a victory in the Illini’s morning 5-0 shutout of Valparaiso. Jared beat Valpo’s Jeffrey Schorsch 6-2, 7-5 — Schorsch is the same Crusader that Aron beat in the fall’s ITA Midwest Regional Championship.

Dancer was happy with the play of both the Hiltziks on Saturday.

“All the work that they do is paying off for them,” Dancer said. “Right now, they’re having some results, kind of the culmination of everything they’ve done beforehand.”

The other two Illini to claim singles victories in both of the day’s matches were No. 33 Tim Kopinski and No. 44 Aleks Vukic. After straight-set singles wins against Valparaiso, the two claimed the first Illini points of the day against Notre Dame. Kopinski handled Eddy Covalschi 6-1, 6-2, and Vukic fought through a challenge from Billy Pecor to win the first set 7-6 (7-4) and the second 6-0.

Kopinski and Vukic’s victories gave the Illini a 2-1 lead, their first of the day, but they soon fell behind again after losses by Toshiki Matsuya in sixth singles and No. 52 Farris Gosea at first singles. Matsuya suffered his first dual meet loss of the season to the Irish’s Alex Lawson, while Gosea fell to Notre Dame’s top player No. 24 Quentin Monaghan. Monaghan has defeated both Gosea and Jared Hiltzik this year, both times in straight sets.

The Illini recovered thanks to the play of the Hiltzik brothers, but they were also aided by an Illinois crowd. The Net Nuts cheering section organized a road trip to Notre Dame and made its presence felt in South Bend. The fans tried to create a home match environment for an Illini team that has to spend nearly a month on the road.

“It was unbelievable,” Dancer said. “Needless to say, that’s just an incredible effort by them to do that, it made for a very special atmosphere for us.”