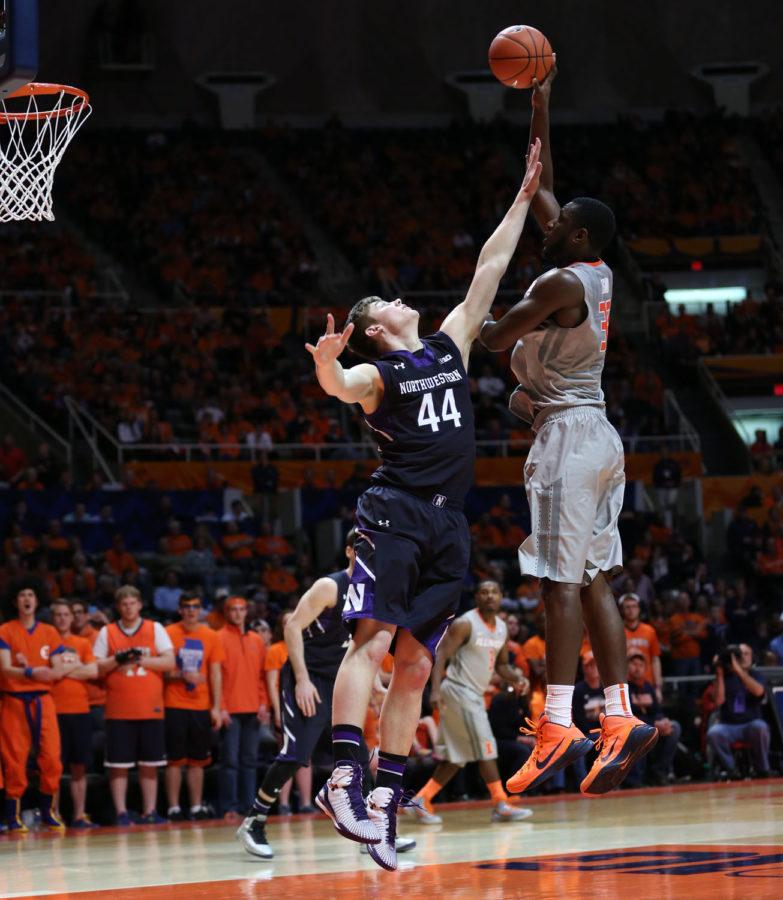 Illinois' Nnanna Egwu (32) takes a hook shot from the post during the game against Northwestern at State Farm Center, on Saturday, Feb. 28, 2015. The Illini won 86-60.

A lot has changed for Nnanna Egwu since he played his first game for the Illinois men’s basketball team.

Egwu is one of four seniors who will play in their last game at home on senior night against Nebraska on Wednesday. Each of the seniors will end their home careers the same way, with a framed jersey and a photo, but it is the differences in those careers that are important to head coach John Groce.

“(The seniors are) four just unbelievable people,” Groce said. “I love all four guys. Each of them has had a different journey, a different path. That’s what makes it kind of cool to be in coaching.”

The senior center has grown as both a player and a person during his time with the Illini. According to Groce, Egwu’s leadership and communication will be missed. Groce added that Egwu is one of the most selfless individuals he has ever coached.

Egwu has accomplished a lot on the court during his time at Illinois. He has notched 729 points, grabbed 600 rebounds and tallied an Illinois-record 193 blocks during his time with the Illini.

Egwu was a major part in the almost seamless transition between coaches. Recruited by Bruce Weber, Egwu didn’t flinch when the Illini hired Groce in 2012 and said he reveled the opportunity to learn from two great coaches during his collegiate career.

A lot has changed for senior guard Rayvonte Rice since Groce took over at Illinois.

Rice didn’t start his collegiate career at Illinois. He was overlooked by Weber but recruited back to his hometown to play for Groce.

During his time with Illinois, Rice has grown tremendously on the court — he is averaging 16.3 points, 6.6 rebounds and 1.9 assists per game this season and has scored 881 points in his two years with the Illini.

Rice has also grown off the court. He’s dealt with injury, suspension and other set backs during his time with Illinois, but Groce said Rice has matured through it all.

“It means a lot to him to put on that jersey,” Groce said. “With everything he’s been through: personally, academically, physically, medically, athletically. It’s made him appreciate more.”

Like Egwu, Rice has cherished the opportunity to be an Illini.

“It’s been a dream come true,” Rice said. “Since I was a little kid I wanted to wear that orange and blue, and actually being able to come out here and compete, you can’t explain that feeling.”

A lot has changed for senior guard Ahmad Starks since he decided to come back to Illinois.

Starks, like Rice, didn’t begin his collegiate career with the Illini. In fact, Starks played his first three years at Oregon State. But like Rice, Starks has grown as a player and as a person while at Illinois.

After failing to receive a hardship waiver to play last season, Starks has been a breath of fresh air for the Illini backcourt this year. Although he’s struggled at times, Starks has played well of late — scoring 19 points against Iowa on Feb. 25 and tallying 17 against Northwestern on Saturday.

“I’ve learned a lot,” Starks said. “I’ve just gotten better in every aspect of the game. Off the court I’ve matured.”

Groce praised Starks’ selflessness and said that he may even care too much about his teammates at times. Starks is second on the team with 2.4 assists per game.

Like the other seniors, Starks knows his time with the team is limited, which is why he has stressed in recent weeks the importance of the team stringing wins together in hopes of making the NCAA tournament.

A lot has changed for senior guard Ryan Schmidt since he was named to the active roster.

Schmidt hasn’t played a full minute for the Illini this season but has said he will never forget his experiences with the team. A former team manager born to die-hard Illini fans, Schmidt was added to the active roster after injuries to Rice and Aaron Cosby decimated the Illini’s backcourt.

“It’s been quite the experience so far,” Schmidt said.

While his journey is the least conventional of the four seniors, Schmidt will still be honored the same as Egwu, Rice and Starks.

Each of the seniors will be given a framed jersey and a picture with Groce and athletic director Mike Thomas. For Schmidt, his memory of playing for 14 seconds at the end of the team’s game against Michigan on will last longer than either of the other mementos.

“I had no idea I would ever see the floor,” Schmidt said. “It really was a dream come true.”