Illini baseball’s Roper at home both on mound, at plate 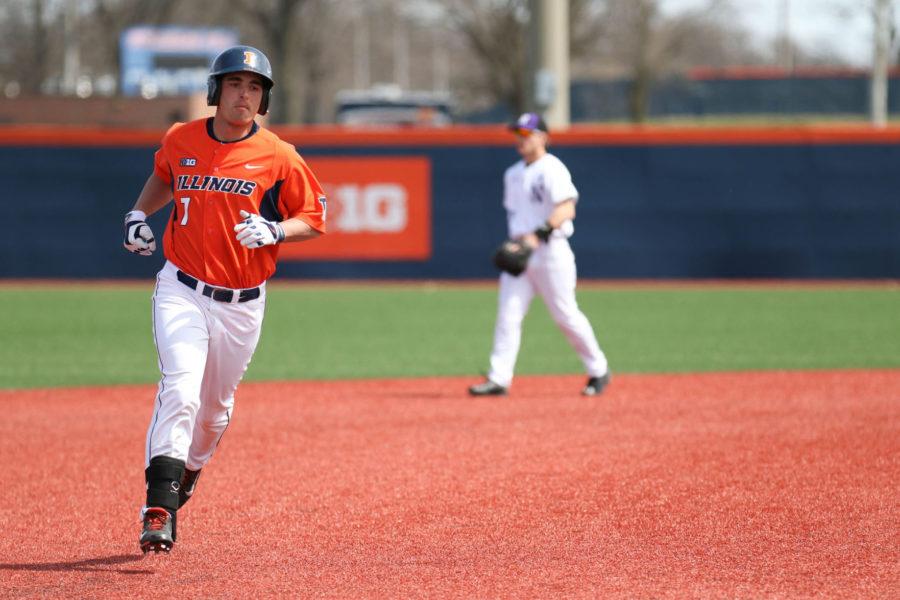 Illinois’ Reid Roper runs the bases after hitting a home run during the game against Northwestern at Illinois Field on Sunday. A strong performance at the plate lead to Sunday’s 17-12 win and solidified Illinois’ series sweep.

Any superhero has an alter-ego, a second identity to relieve the stress of the first.

Illinois baseball senior infielder Reid Roper has such an identity — in addition to his fielding duties, he’s also a pitcher.

Roper, the Illini’s starting second baseman, has pitched in 32 games (31 2/3 innings) during his four seasons at Illinois. During that time, he has started 165 games — 154 at second base.

“I feel like I’m two different people,” Roper said. “There’s the side of me that’s a pitcher and the side that’s a fielder and a hitter.”

His hitting side has gotten lots of attention. Roper is the Illini’s top hitter this season, leading the team in batting average, slugging percentage, RBIs, hits, doubles, triples (with one) and total bases.

But his pitching side has also been rock solid. He has appeared in two innings of relief this season, both scoreless, and picked up a save in Sunday’s 2-1 win over West Virginia — his 11 career saves are tied for eight all-time at Illinois. He has not allowed a run since April 2013, his sophomore year.

“I’m comfortable with Reid in any situation,” head coach Dan Hartleb said. “I’ll use him in the field and on the mound.”

Hartleb added that he doesn’t weigh Roper’s effectiveness at the plate during a game when turning to the senior to pitch. When Roper is substituted in as a pitcher, he is allowed to bat.

Hartleb has used Roper primarily as a late-inning pitcher — he unofficially shares the closer role with junior Tyler Jay. Roper, a righty, is a change of pace from Jay, a hard-throwing southpaw.

Jay has racked up 85 strikeouts in 77 2/3 innings in his Illinois career, while Roper has just 27 strikeouts in his 31 2/3 innings. Prior to this season, they both had recorded 10 career saves as Illini.

Roper’s younger brother Ryne — a sophomore and the team’s starting third baseman — is also listed as a pitcher on the team’s roster, but has yet to throw an inning for Illinois. Hartleb said he sees Ryne filling the role Reid currently holds when the senior graduates. Both Ropers were All-State pitchers in high school — Reid was 12-0 as a senior and Ryne was 11-0.

In addition to completing their infield tasks in practice during the week, Reid said the brothers throw long toss. Once a week, Reid throws a 30-pitch bullpen session to prepare his arm and sort out his pitches for the weekend ahead in case Hartleb calls upon him.

It might be presumptuous to label Reid a superhero, but his .413 average through 12 games is 92 points higher than senior right fielder Casey Fletcher’s .325, the team’s second best. Reid’s average is also nearly 200 points higher than his final average last season (.250).

Comparisons to a superhero aren’t ones Reid makes about himself, but his teammates have high praise for his abilities both on the mound and at the plate. Senior outfielder Will Krug said there isn’t a ball that Reid doesn’t hit hard, and added that Reid’s numbers this season aren’t surprising.

Sophomore reliever Cody Sedlock went a bit further — he said that although he knows Reid is an infielder, the bullpen pitchers consider him just as much a member of their group as anyone.

“We love to see Reid trotting out of the dugout to finish off a game,” Sedlock said. “We trust him.”