An athletics bonus could decrease tuition for instate upperclassmen 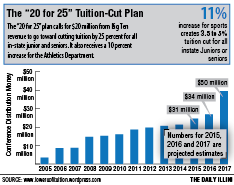 “National crisis” are the words Jay Rosenstein, professor in Media, used to describe the current levels of college student debt. Rosenstein is not alone in his sentiments. In 2012, the average debt for a University graduate was $25,000. However, Rosenstein thinks he may have a solution.

On March 1, Rosenstein launched the website “How to Lower University of Illinois Tuition.” His proposal is simple: take the difference from the increase in contract money paid to the University’s athletics department, and give it to the general University revenue to lower tuition by 3 to 5 percent for either all in-state juniors or seniors.

In 2017, the new Big Ten TV contract will kick in, and this tuition cut could shoot up to 20 to 25 percent for either all in-state juniors or seniors.

“We need some new and innovative ways to deal with tuition costs,” Rosenstein said. “The old ways of dealing with it just won’t work anymore.”

The athletics department will receive this payout starting in 2017 as the result of a new contract between the Big Ten and ESPN, which would allow ESPN to broadcast seven college football games a year. This contract is valid for 12 years, and gives the Big Ten a lump sum of $7 billion. The conference distribution will split up the money between schools in the conference.

This means that the Big Ten revenue for the University’s athletics department will increase from around $27 million in 2014 to nearly $50 million in 2017.

While the athletics department receives University funding in the form of mandatory fees, it does not contribute money to the University.

“All the revenue the athletic association takes in, stays there,” Rosenstein said. “Ticket sales, parking, shirts — all of the things that generate revenue for athletics only go to athletics. None of it goes to the University itself.”

Rosenstein said he researched the financing of college sports for several years, with the intent to make a documentary on the subject.

“As I started to look at the numbers, something just started to click,” Rosenstein said. “We can flip the script here and help bring tuition down, and it won’t cost us anything.”

While Rosenstein’s plan advocates a tuition cut for in-state juniors or seniors, he says what is most important about his plan is that athletics shares some of its revenue with the rest of the University.

Robin Kaler, University spokeswoman, said the University is “very concerned about maintaining affordability and access, having frozen tuition for incoming, in-state freshman in 2015 after two years of holding tuition increases to inflation rate.”

In light of Gov. Bruce Rauner’s proposed $209 million budget cut to the University, Kaler believes there is a more important conversation on the table.

“A more constructive conversation right now would be how to work together to demonstrate the value our University adds to the economy and the people of Illinois,” she said.

Rosenstein’s website includes a petition to Chancellor Phyllis Wise, the Board of Trustees and President Robert Easter asking them to implement his proposal.

As of press time, the petition has been signed by 44 faculty members, 142 students, 11 staff members and 24 alumni.

Rosenstein believes his plan would aid the University if the legislature cut the budget.

“By taking this money and bringing it into the general revenue fund, it will help ease whatever cuts the state legislature makes,” he said.

Bruce Rosenstock, professor of religion, was one of the first to sign the petition and agreed with Rosenstein.

“If we want the state legislature to preserve our funding, there is only one way for us to persuade them,” Rosenstock said. “And that is by showing them that the University of Illinois is the greatest institution for their own children.”

Rosenstock said that he was not aware of the new ESPN contract before seeing the website.

“What I certainly did know,” Rosenstock said, “Were all the facts regarding the tuition hikes in the past 10 years. I was very much concerned about those.”

Rosenstein will formally present his proposal to University administration at the Board of Trustees meeting on Thursday.

“I see this as an everybody wins situation,” Rosenstein said. “The athletic department gets more money, students get a tuition break — doesn’t cost anyone anything. So that’s a win-win. Everybody gains.”