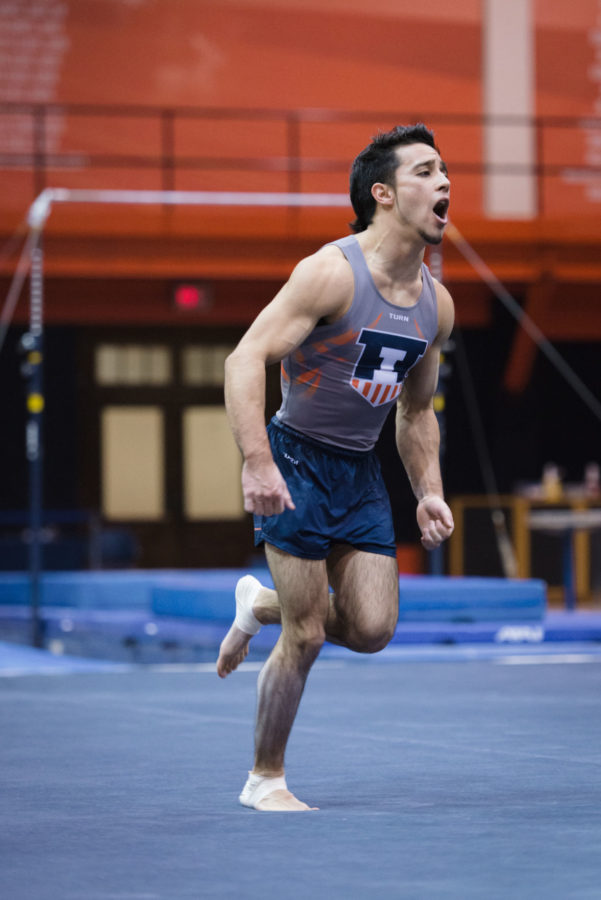 Sonny An The Daily Illini Illinois’ C.J. Maestas encourages his team after a strong performance on the floor during the meet against Stanford at Huff Hall on Friday, March 6, 2015.

To his coaches and teammates, Illinois gymnast C.J. Maestas is modest, dedicated and possesses a captivating attitude.

To his opponents, he has proved to be a force to be reckoned with, consistently posting high scores and executing momentum-changing routines.

But this season is the last of Maestas’ Illinois career. The redshirt junior will graduate this spring instead of applying for another year of eligibility.

His career at Illinois is a decorated one, filled with awards and championship trophies. But his journey to success wasn’t free of obstacles.

During his career as a highly successful young gymnast, Maestas caught the attention of Daniel Ribiero, who was a gymnast at Illinois at the time. Ribiero is now an assistant coach for the Illini and someone Maestas sees almost every day.

“He (Ribeiro) is the main reason I came to Illinois,” Maestas said. “He made me feel comfortable and feel a part of the team even as a recruit.”

Ribeiro said he started noticing Maestas’ talents while the two were competing at national gymnastics competitions together some eight years ago.

Once Ribiero entered his junior year at Illinois, he started to aggressively recruit Maestas — then a senior at Cibola High School in Albuquerque, New Mexico.

The recruiting process ultimately led to a friendship between the two. Three to four times a week they conversed over the phone or via text message — about topics that ranged from gymnastics to personal life.

“It really developed from me trying to get a good gymnast, to me wanting to bring in a best friend,” Ribeiro said. “The kid’s got the biggest heart. He means well in every single thing that he does.”

Maestas was supposed to join Ribiero — then a senior — at Illinois as a freshman in 2010, but he didn’t attend the University that year for academic reasons. Maestas had to retake the ACT and write a letter of appeal to obtain a scholarship.

Maestas finally came to campus in the fall of 2011 – Ribeiro’s first season as assistant coach – and immediately made an impact.

Maestas was approached by a member of the media at the Big Ten Championships when he was holding his awards in his arms and was asked if a picture could be taken of him with his trophies. He responded, “Yes, as long as my team is behind me in it.”

This is a moment head coach Justin Spring remembers vividly.

“He couldn’t even hold all his trophies up, and he told (the media), ‘Hold on,’ and ran over to the team and asked them to get behind him for the picture,” Spring said.

So there he stood, surrounded by his teammates, grasping his trophies and basking in the ambience of taking the Big Ten by storm in his first year. He was confident. But Maestas was yet to face the toughest challenge of his gymnastics career.

Before the start of his sophomore season, he suffered a near-complete triceps tear and didn’t know if he would ever compete again. Spring recalls Maestas telling him, “It’s over, it’s over.”

Nick Sacramento, a former teammate-turned-team manager and roommate of Maestas for three years, said Maestas posted inspirational quotes and notes in his room with goals for himself, something the gymnast continued doing during his rehab.

While he attempted to keep himself motivated, Ribeiro noticed Maestas was at a vulnerable point in his life.

“That was a time when (the team) really helped him,” Ribeiro said. “He was in a rough place.”

Re-strengthening his triceps was the first objective. The second was reconstructing his gymnastics to relieve as much stress on his triceps as possible.

One of the most noticeable changes is in his pommel horse routine. While many gymnast circle around by gripping the pommels, Maestas spins his flat hands in a circular motion and loops his body around the apparatus to complete his turns.

A year and a half after suffering the injury, his new techniques have proven to be successful. In the team’s Sunday meet against Nebraska, he won three event titles, putting himself in a tie with Ribeiro for 10th place on Illinois’ all-time titles list with 45. One of those titles came on pommel horse, where his 15.100 score tied a personal best.

Whether Maestas continues to improve or not, Spring considers himself fortunate that Maestas is healthy enough to compete.

“C.J.’s like the glue that holds this team together,” Spring said. “He has that magnetic personality. It’s going to be awful losing that piece of him.”

Even with his polished career, his teammates and coaches know that he has two more goals in mind before he departs.

“His determination right now is higher than it’s ever been,” Ribeiro said. “He wants to go out like he came in… he wants to win a team Big Ten title and team national title.”