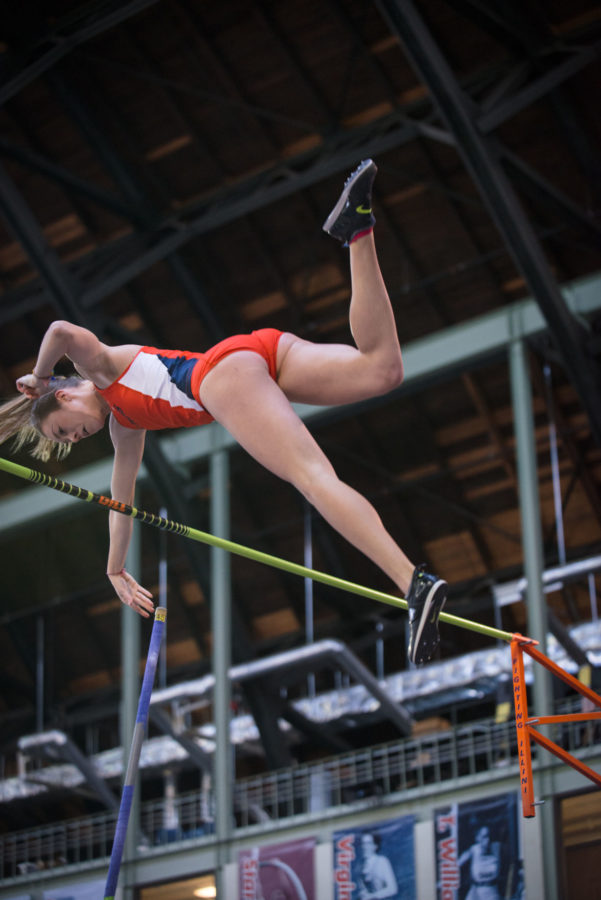 Illinois' Stephanie Richartz releases the pole as she lifts past the bar to break her previous record with a height of 4.38 meters.

With the NCAA Indoor Track and Field Championships in Fayetteville, Arkansas, just two days away, Illinois senior Stephanie Richartz is trying to accomplish something that has never been done at Illinois — win a pole vault national championship.

Richartz, Illinois only representative at Nationals, will go up against 15 of the country’s best vaulters. She joins Stephen F. Austin’s Demi Payne, No. 1 Arkansas’ Sandi Morris, No. 5 Texas’ Kaitlin Petrillose and Duke’s Megan Clark in the national top five.

Richartz’s mark of 4.39 meters ties her with Petrillose for third-best in the country. The two trail Morris and Payne.

But Richartz said it will take a “unique series of events” for her to win a national championship.

“I don’t think it’s completely out of the question,” Richartz said. “But it would take a combination of some people falling short of what they’re capable of and me really stepping up to what I’m fully capable of. I think that, to be honest, I have a lot left in me that hasn’t shown in numbers yet.”

Assistant coach for pole vault Bryan Carrel said Richartz has worked hard at trying to reach 4.57 meters (15 feet), a mark that Carrel said is in her reach. Her goal this weekend is to finish third or better.

Carrel said reaching third might be tough for Richartz because of the quality of competition — Morris and Payne are two of the best vaulters in NCAA history and two of only three vaulters in ever to clear 4.57 meters.

Morris and Payne have broken each other’s record multiple times and for Carrel, there’s a clear difference between those two and the field.

“I think for all the girls, beyond those two, third place is like winning a national championship,” Carrel said. “With Stephanie, we’ve gotten better every single week, we haven’t really had a setback.”

Richartz said all she’s aiming for this weekend is to set a new personal record, although she added that a national championship wouldn’t hurt.

“I want to go out there and jump through as many bars as I can,” Richartz said. “Accomplishing a personal best is always a great way to compete at a high-level meet like that.”

Going into a big meet like the one this weekend can cause stress for athletes, but head coach Ron Garner thinks that Richartz is far from feeling pressured to do so. She was sidelined all of last indoor season with an ankle injury, and Garner added that her recovery helped her to focus on her mindset.

“I think that’s been part of what she has learned in the past year,” Garner said. “She had to go day-to-day with the rehab process and assessing where she was at. If one particular thing wasn’t ready to go, then she focused on some other component. But, I think she’s ready to go for this and I think that everything in her career has prepared her for this meet.”