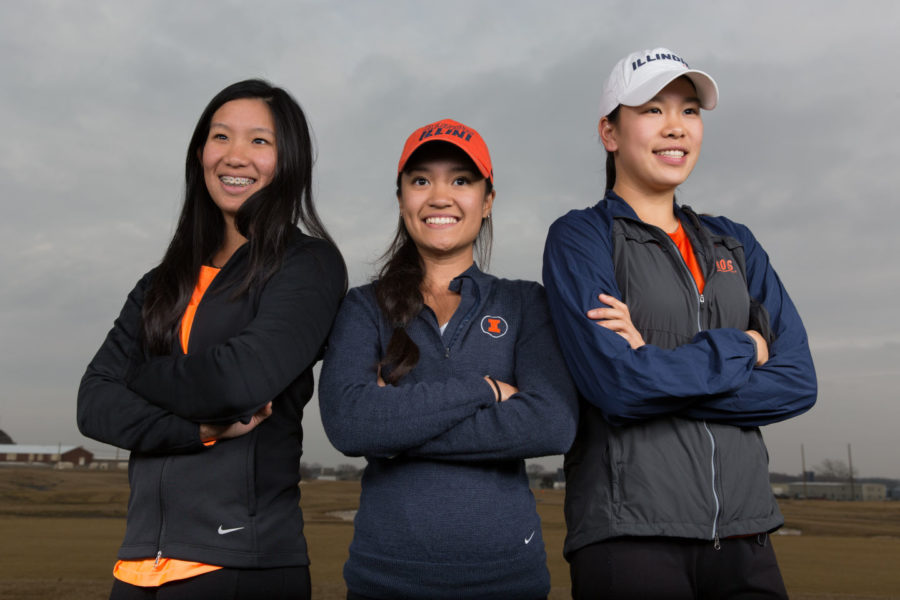 Illinois' during the game against Nebraska at State Farm Center on March 5. The Illini won 69-57.

A six-hour flight from Bangkok to Tokyo, usually a few-hour layover, a 12-hour overnight into Chicago and a two-hour drive to Champaign.

After nearly a day-long trip and traveling halfway around the world, three Thai golfers are finally settled in at the University of Illinois, their home away from home.

Senior Pimploy Thirati and freshmen Jan Prapassarangkul and Pailin Ruttanasupagid are the only three international athletes on the golf team, and they all hail from Thailand.

Thailand is more than 8,500 miles away and is home to nearly a third of the Illini women’s golf team.

How did three women from Thailand land spots on a Big Ten golf team?

Ruttanasupagid had an advantage compared to her teammates. Her family moved to San Diego, California, so that she could attend high school in the U.S.

Despite living in Thailand, Thirati and Prapassarangkul competed in the U.S. throughout their high school careers.

“I started coming over to the U.S. to play tournaments in the summer when I was 8,” Prapassarangkul said. “It was after my junior year when coach (Renee Slone) started to watch me play in tournaments.”

Thirati played in 10 tournaments during the summer before her senior year of high school and attracted the attention of multiple American universities. Slone and Illinois won the attention of each of the golfers, and all three decided to play at Illinois.

However, Thirati said that sometimes the little things are the hardest things to get used to, one of those being the dorm food.

“One adjustment was getting use to dorm food, not so much it being American food, but more so with portion size,” Thirati said. “I gained a lot of weight my freshman year, but other than that I just learned to go with portions that I am comfortable with.”

Being away from family is always a difficult thing to deal with, but according to Prapassarangkul, an only child, her parents had a harder time than she did.

The time spent away from their families and Thai culture has had a lasting effect on them. The differences are too many to count.

“I could write a whole research paper on how I’ve changed,” Ruttanasupagid said. “My biggest one would be acceptance. I’ve learned to accept myself, and I’ve also learned to embrace other people’s differences and understand them.”

Coming to Illinois was also a chance for Ruttanasupagid to rejuvenate her career. She had been in a slump through her junior and senior years in high school and said she owes it to Slone for helping her find her game.

“Coach has watched me from my peak, like, ‘Whoa, this girl could go pro,’ to ‘Why is this girl even here?’?” Ruttanasupagid said. “I had lost all passion and inspiration, and I came here and it just started to pick up again.”

At first sight, one would think that the three came to Illinois to move on and go pro in golf, but that is not the case, at least for Thirati.

Thirati, the trio’s senior member, doesn’t plan on playing golf professionally — she will graduate with a bachelor’s degree in economics and hopes to get a job in Chicago and stay in the U.S.

Both Prapassarangkul and Ruttanasupagid are leaving the option to go pro open; however, they are not completely against going into their respective fields. Prapassarangkul — an engineer — said balancing studies and golf has been her biggest challenge at Illinois. Ruttanasupagid is planning on majoring in business.

Golf is one of the most popular sports in Thailand, and success like the trio has had only goes toward furthering that popularity.

“Golf is big in Thailand, and we’re not the only school with Thais,” Thirati said.

In the Big Ten alone, there are nine Thai women’s golfers, a number that has been on the rise in recent years.

“We just got back from a tournament, and there were like eight Thai girls there. Basically we could make up a whole team,” Prapassarangkul said. “It is common now in Thailand for us to come over and pursue university golf.”

Thirati also mentioned that she is able to keep close ties with her family and friends, even though they are spread out across the world.

“When I go back I see my friends that still go to school in Thailand,” Thirati said. “A lot of my high school friends came here to America, though. My best friend goes to Kansas, another to Northwestern; we’re all over the place.

Coach Slone has already signed another Thai-born player for next year’s roster — Bing Singhsumalee of Naperville, Illinois — and Slone says the high number of recruits coming from Thailand is just a coincidence.

“Pim was our first one, and then it just worked out that we had Pai and Jan, and they happened to know each other from their junior golf days,” Slone said. “(Ruttanasupagid and Prapassarangkul) didn’t even know each other were coming here before their unofficial visits.”

Whether it is a matter of happenstance or fate, it can’t be denied that these Thai players have had a huge impact of the Illinois golf program. If Slone’s recruiting tactics continue, it looks like there will be more Thai faces to come through the Illinois program in the upcoming years.