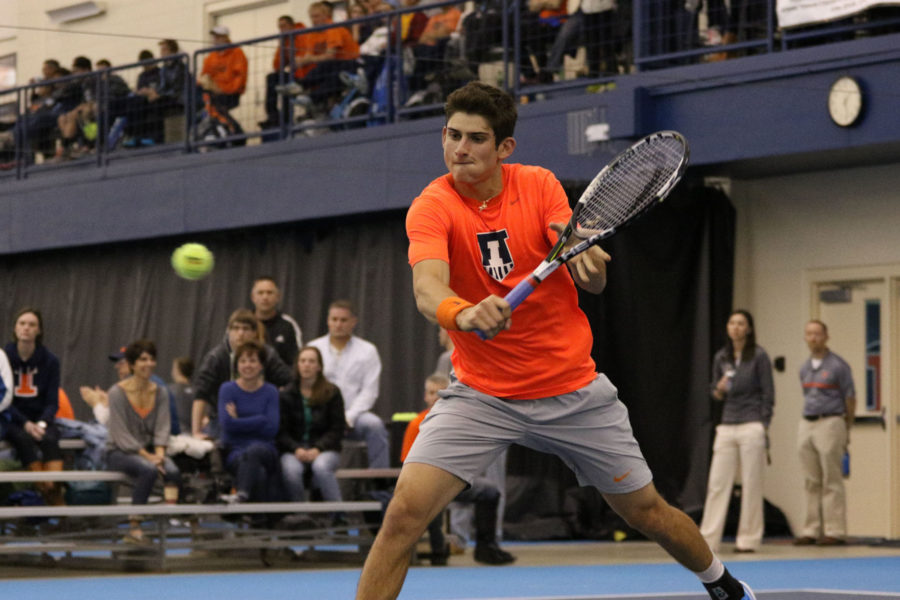 The tide is turning for the Illinois men’s tennis team against the Ohio State Buckeyes. It’s been a one-sided rivalry between the Big Ten’s top two teams for the last few years, dominated by the Scarlet and Grey. But on Sunday, the No. 3 Illini swept the No. 11 Buckeyes for their second win over OSU this season, after only three victories since 2005.

“We did a good job in doubles and staying focused,” head coach Brad Dancer said. “(In singles) enough guys showed up and got the job done to get a team victory.”

Illinois defeated the Buckeyes 4-2 in February at the ITA Indoor National Championships. On Sunday, the Illini controlled the match, and started by taking the doubles point. The doubles pair of seniors Ross Guignon and Tim Kopinski was once again split up, an experiment Dancer broke out on the team’s trip to Texas two weeks ago. Dancer says distributing the duo’s doubles prowess to other courts helps the Illini’s doubles play.

Gosea returned to the team after serving a two-week suspension for a violation of team rules. He played in the No. 2 singles spot for the first time this year behind Jared Hiltzik, who took over the top singles spot during the team’s Texas trip.

Gosea contributed in two doubles wins with Vukic, but struggled in singles. He lost to Penn State’s Leo Stakhovsky on Friday and was up 6-2, 4-3 to OSU’s No. 44 Chris Diaz when the match ended.

The match against Ohio State was the second conference victory of the weekend for the Illini, who defeated Penn State 6-1 Friday afternoon. The test of the conference slate continues for Illinois next weekend. Illinois heads north to Michigan for a pair of road matches at Michigan State on Saturday and Michigan on Sunday.

Dancer said another victory against a highly ranked opponent is another positive sign moving forward.

“We’ve obviously played a lot of great teams this year and Ohio State’s another one of those great teams,” Dancer said. “We’ve been tested in and out again and again. It’s a good sign from us that we’re dialed in the way we are right now.”