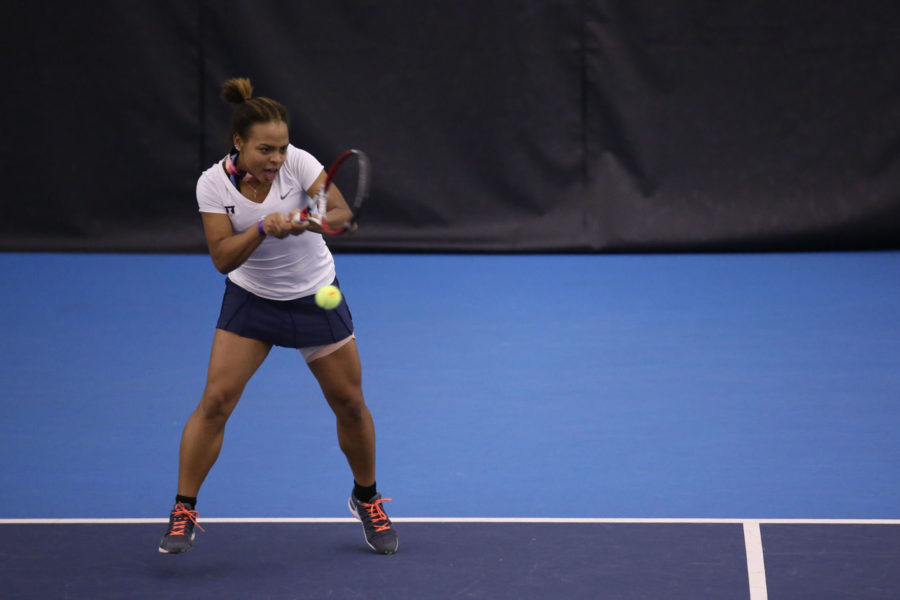 Illinois’ Jerricka Boone attempts to return the ball during a match against Indiana at Atkins Tennis Center on March 1 during the Illini’s 6-1 win against Indiana.

The team now stands at 7-9 and head coach Michelle Dasso admitted that the spring break matches did not go as planned.

“Spring break was painful,” Dasso said. “But the good news is it is behind us. I have a feeling we are going to shine in April.”

The losing streak began at Northwestern on March 20. Despite the Wildcats’ down season, they thrived on their home court, picking up a 6-1 victory over the Illini. Northwestern leads the all-time series 47-8.

Although Illinois was able to pick up the doubles point in its next three matches, it was to no avail — the Illini suffered a 4-3 loss to UC Santa Barbara on Tuesday and a 4-1 loss to Hawaii on Wednesday at the All-American Main Draw in Santa Barbara, California. Illinois followed those losses with a 4-3 loss to Michigan State in East Lansing, Michigan on Saturday.

Senior Melissa Kopinski knows nothing comes easy on the road, but said her team still needs to step it up.

“ … Nonetheless our team needs to find a way to get the W,” Kopinski said. “It’s a small hump we need to overcome, and we’re very excited to have the home crowd for us this coming weekend.”

Illinois’ Sunday match against No. 12 Michigan was no easier. The Wolverines got off to a hot start early, picked up the doubles point, and never looked back.

The Illini were outmatched at almost every spot. Sophomore Jerricka Boone was the lone Illinois player to win her singles match. Michigan eventually won the competition 6-1, putting an end to the Illini’s poor spring break performance.

With its loss to Michigan, Illinois remains winless in the Big Ten — the Illini were 6-6 in conference play last year and already have five losses this year.

Kopinski pointed out that the team is just excited to get back home. The Illini’s next three matches will be at the Atkins Tennis Center.

Kwong admitted that team morale is not high at the moment, but the players are trying to put the losses behind them and look ahead to their next match.

“We’re all very disappointed and down from a long week,” Kwong said. “However, we plan on keeping our heads up, training hard this week and getting ready for Long Beach State on Thursday.”