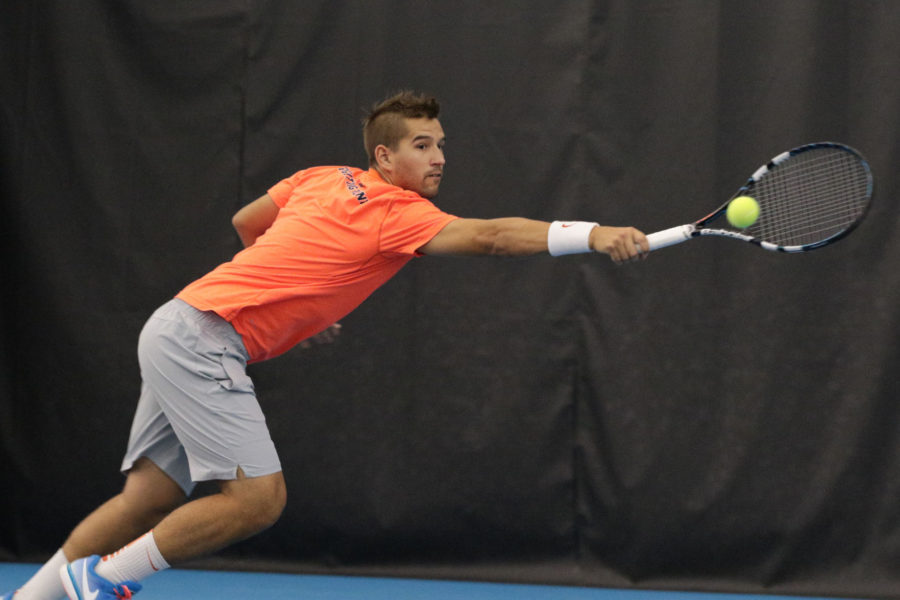 Illinois’ Blake Bazarnik reaches for the ball in an attempt to save it during the tennis game vs. Northwestern at Atkins Tennis Center on Feb. 20.

The Illinois men’s tennis team is still perfect in the Big Ten after two weekend wins in Michigan. The team defeated Michigan State 6-1 in East Lansing, Michigan, on Saturday afternoon and Michigan 4-0 on Sunday in Ann Arbor, Michigan.

The two victories came with two more doubles point wins for the Illini. Since their shutout loss to No. 17 TCU on March 16, Illinois hasn’t dropped a doubles point. It was a chink in the armor earlier this spring, but the team has been greatly improved of late. Part of the change came in splitting up top doubles team Ross Guignon and Tim Kopinski. The pair has proved to be just as important on different courts, according to head coach Brad Dancer.

“They’re leaders of the program since the day they got here … they’re doing a great job with their doubles teams,” Dancer said. “(Guignon) was really the catalyst for our doubles. I thought he was awesome today … he set the tone for the whole match.”

Dancer has been trying lots of different combinations on the doubles court. One new combination came on Saturday as Blake Bazarnik joined No. 22 Jared Hiltzik at the No. 2 doubles spot. The duo took down Michigan State’s Gijs Linders and Mac Roy 8-7 (7-4).

Bazarnik returned to the singles lineup for the first time since the TCU match and put together a very successful weekend. He beat Michigan State’s Michael Dube 6-2, 6-2 and Michigan’s Tyler Gardiner 6-3, 6-2, in addition to his contributions on the doubles court.

Dancer said Bazarnik has been working hard in practice to return to the line-up.

“It was good to be able to play some matches. I had a good week of practice leading up,” Bazarnik said. “I’m just trying to get better every week, everyday … get my fitness better, working on stuff with my backhand … and just waiting for the opportunity.”

No. 64 Farris Gosea was also back in full force for Illinois. After losing his first singles match back last weekend, he picked up two wins on the Michigan trip. In singles, Gosea defeated MSU’s Brett Forman 6-1, 6-0 and was up 6-1, 5-2 on Runhao Hua of Michigan when the match was ended. Gosea also continued to make an impact on doubles with freshman partner and Big Ten Men’s Tennis Athlete of the Week No. 50 Aleks Vukic. The pair went 2-0 in doubles, winning 8-3 against Doug Zade and Jasper Koenen of MSU and 8-5 against Davis Crocker and Gardiner of Michigan.

The Illini are making their way through the heart of the Big Ten slate now. After this weekend’s matches, they have two more weekends against conference competition before the Big Ten Tournament at the Atkins Tennis Center. Bazarnik said the team’s goals are clear for the rest of Big Ten play.

“The goals for us are to win the Big Ten,” Bazarnik said. “Win out the rest of the Big Ten season and then go on to the Big Ten tournament.”