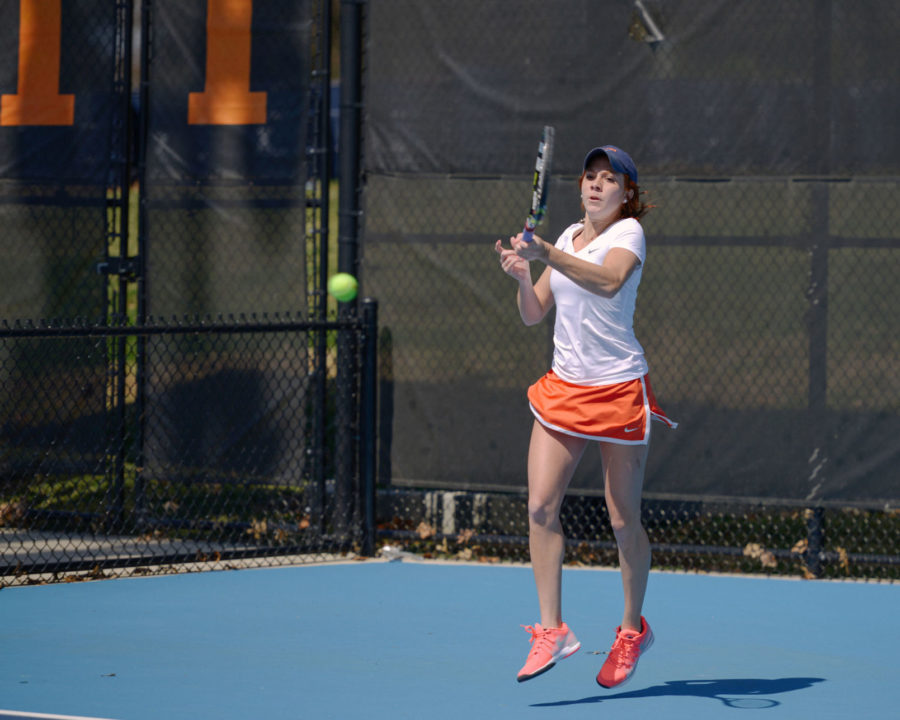 Heading into Thursday night’s match against No. 33 Long Beach State, the Illinois women’s tennis team was in the midst of a deflating five-game losing streak.

At the conclusion of the weekend, the Illini are winners of three straight after defeating Long Beach State, in addition to sweeping Maryland on Saturday and Rutgers on Sunday. The team’s record now stands at 10-9 and 2-5 in conference play.

Illinois dominated Long Beach State at the Atkins Tennis Center on Thursday in its lone non-conference match of the weekend.

The Illini secured the doubles point after wins at the top two spots. Senior Melissa Kopinski and sophomore Louise Kwong won 6-3 at No. 1 while sophomores Jerricka Boone and Madie Baillon finished the job at the No. 2 spot with a 6-4 comeback win.

The Illini moved outside Saturday for a match against No. 75 Maryland and had no trouble with the Terrapins, defeating them 7-0 and earning their first win in conference play. The team also moved to 3-0 when playing ranked opponents while unranked.

After the match, Illinois head coach Michelle Dasso said she believed it was the team’s best performance since its 6-1 victory over Indiana on March 1.

Dasso’s crew carried the momentum into Sunday’s match against Rutgers to complete its second sweep and conference win in two days.

Boone and Baillon finished first in doubles, winning their match at the No. 2 spot 8-3 after dropping the first two games early. The sophomore duo is now 7-1 together and riding a five-match winning streak. Baillon also picked up the team’s first singles victory, notching a 6-1, 6-1 win over Rutgers’ Farris Cunningham on court five.

Dasso is high on her team at the moment after being frustrated with the group’s performance during spring break.

“We are headed back in the right direction, and the goal has not changed since after break,” Dasso said. “We want to win out.”

Dasso credits the team’s recent success to individual practices with more specific purposes for her players.

She added that her players could not wait to play after break because they were anxious to get on a hot-streak.

Kwong knew the team was on a mission after a disappointing spring break.

“We were a lot more focused and motivated after such a bad week,” Kwong said. “We definitely as a team wanted it more.”