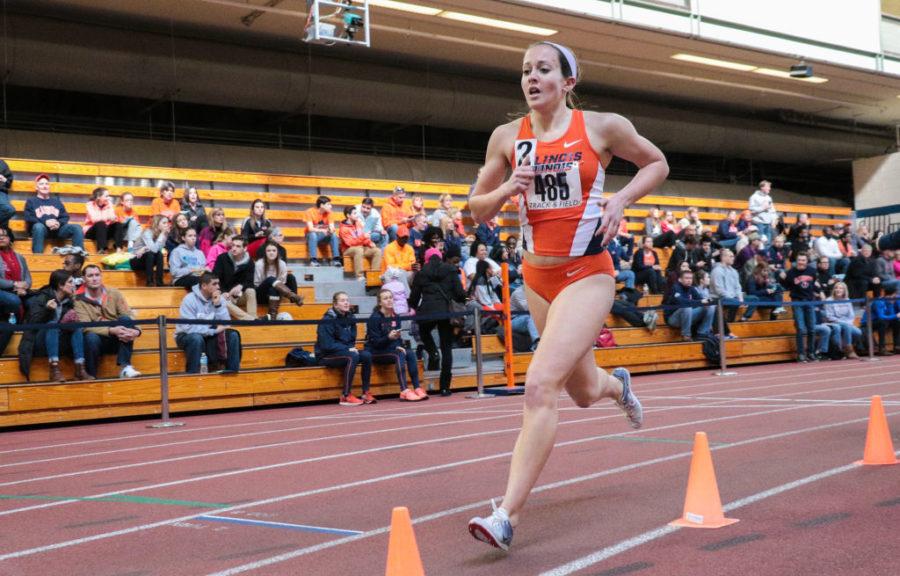 Illinois’ Colette Falsey (485) runs in the 1 Mile Run event at the Orange & Blue meet at the Armory on Saturday, Feb. 21. Illinois’ women’s team won 1st place out of 5.

After competing just a few miles away last weekend, the Illini women’s track and field team will be doing lots of traveling for its next meet.

The team will compete in the Jim Click Shootout Saturday in Tucson, Arizona, hosted by the University of Arizona.

This will be the Illini’s first appearance at the meet, which will provide quality competition.

Senior Amanda Duvendack had a successful individual performance in the 400 meters at the Big Blue Classic and is aiming to finish the final stretch of her collegiate campaign on a high note.

Duvendack is racing in the 800 meters this weekend, which she said would be another race to have under her belt this spring.

“The main goal of any of these really competitive meets where we travel to find some good weather and some good competition is to just work on what we’ve been practicing all season,” Duvendack said. “And hopefully that turns into a PR.”

Duvendack did not compete in the indoor season for the Illini while she was recovering from a foot injury.

“Not being able to compete indoor this season has kind of been different for me,” Duvendack said. “I was just not practicing racing — but it does add a different element and one that you get better at as you keep doing it.”

Duvendack and junior Lindsey Rakoznik were two members of the relay team that won the 4×800-meter relay.

Rakoznik is looking for another strong performance this weekend as she prepares for the Drake Relays — which are two weeks away ­— where she is aiming for a school record.

“I knew at the beginning of the season, we were going to run the 4×800 and try and get the school record,” Rakosnik said. “So I’m excited for another opportunity to do that, so I’m hoping for good conditions and for us to be healthy so that our name can be in the Armory.”

Rakosnik said that both the indoor and outdoor season thus far have all been about one aspect – consistency. She pointed to her faster times this spring as evidence.

“Staying focused and being smart about what my body can take is important for this season so that I can complete the full season,” Rakosnik said.

The lone winner from last weekend was junior Britten Petrey, who competed in the 3,000 meter steeplechase.

This weekend, Petrey said she hopes to improve and gain more steam toward her most important month of the season.

“What I’m looking forward to the most this weekend is making the small improvements that I felt I needed to this past weekend and make them the adjustments this weekend,” Petrey said. “I would really like to PR again, that would be great. It would be a nice stepping stone for May and my upcoming weeks and races, so what I’m really looking forward to is making myself a better athlete all-around in the steeplechase and seeing what the competition is like and being in nice weather.”