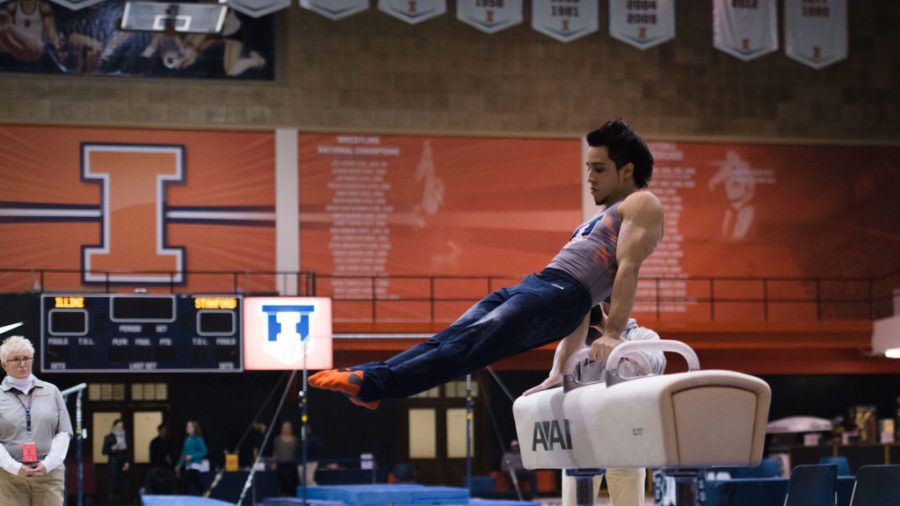 Illinois’ C.J. Maestas performs a routine on the pommel horse during the meet against Stanford at Huff Hall on March 6.The Illini lost 21-9.

The Illinois men’s gymnastics team made history this weekend at the NCAA Championships, failing to advance to the team finals for the first time since 2002.

But despite a series of injuries, the team exited Norman, Oklahoma, with an individual national champion.

Illinois suffered its first blow before the competition began. Junior Fred Hartville tore his Achilles tendon during warmups for Thursday’s preliminaries. The 2013 vault national champion missed part of the regular season due to a minor knee injury.

Illinois came in ranked No. 5 in the 12-team field but finished outside the top six. Oklahoma won the team championship, capping off an undefeated season (26-0). Stanford and Penn State finished second and third, respectively.

While the team did not advance to the finals, eight gymnasts did qualify to compete in Friday’s all-around and individual finals preliminaries. Out of those eight, five advanced to Saturday’s individual finals. Senior Jordan Valdez qualified to advance on parallel bars but was forced to end his Illinois career early when he dislocated his shoulder during his high bar qualifying routine.

While Baker added to his impressive freshman campaign, a team final appearance was what he had hoped for the most.

“For the seniors, I thought it was terrible. I feel bad for them,” Baker said of not making the team finals. “But as a freshman I feel like it’s more so of a learning experience.”

Maestas, who is choosing to graduate in May instead of applying for another year of eligibility, took home four All-American honors on still rings (second), floor exercise (fifth), all-around (second) and on high bars, where he won the national title. Before his routines, assistant coach Ivan Ivankov helped keep Maestas motivated.

“Ivan kept giving me hugs before I (competed) and whispered in my ear to lay it all on the table,” Maestas said. “My gymnastics reignited with that. I’m so proud to go out the way I went out.”

This marks the second-straight year that an Illinois gymnast won the national high bar title — Valdez won the honor last season — and the fifth-straight year Illinois has had at least one national champion.

Junior Joey Peters competed in the finals on still rings but finished outside the top eight (10th), which meant he did not earn All-American honors.

The team result is seen as an obvious disappointment for Illinois, who had a 10-0 start to the season. Spring said that a lack of competitive spirit was the biggest factor that resulted in Illinois finishing out of the top six. Regardless of the result, he wants to remain optimistic about the team’s future.