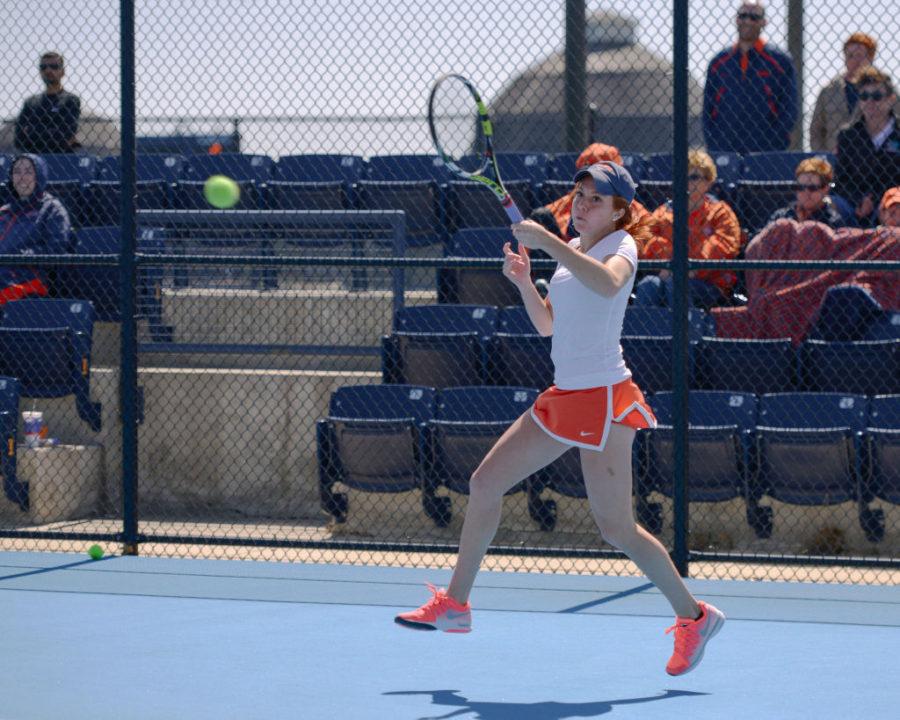 Illinois' Madie Baillon returns the ball during the game against Maryland on Saturday, April 4.

The Illinois women’s tennis team won both of its road matches this weekend, proving that the team can sustain success away from its home court.

Illinois moved to 12-9 on the season after defeating Wisconsin 5-2 on Friday and Minnesota 5-2 on Sunday.

Despite a win in doubles on court one from the tandem of senior Melissa Kopinski and sophomore Louise Kwong, Illinois lost the doubles point on Friday to the Badgers after falling on the second and third doubles courts.

It was the captain, Kopinski, who took her success from the doubles point and erased the momentum gained by Wisconsin. Kopinski won her singles match at the No. 2 spot against Maria Avgerinos in straight sets 6-2, 6-3.

Boone picked up a win at the No. 4 spot over Wisconsin’s Lauren Burich to put the Illini up 2-1 in the match before the Badgers tied it up after Casati fell in a 3-6, 1-6 decision.

A win from Baillon in three sets was followed by a match-clinching win on court No. 6 from Tapak. The freshman claimed her first Big Ten victory in the 6-3, 7-6 (7-3 tie-breaker), 6-3 decision.

The Minnesota match Sunday began similarly for Illinois, as the Illini lost the doubles point to the Golden Gophers.

Nevertheless, Illinois bounced back in singles, claiming the first set on each of the top three courts and winning the top five matches.

At the conclusion of the weekend, head coach Michelle Dasso was happy with her team’s performance.

“My feeling is one of respect for my team’s competitive will to win they have shown us lately,” Dasso said. “The doubles performance, aside from No. 1 doubles this weekend, was disappointing and rough, but the girls kept their composure and rebounded with high energy and a ‘we will not lose’ attitude in singles play.”

Kopinski said that the wins did not come easy and that her teammates focused intensely throughout both matches despite losing the doubles point on Friday and Sunday.

While any type of win is appreciated, road victories are more rewarding in Kopinski’s eyes.

“It is very satisfying to get Big Ten wins, especially on the road,” Kopinski said. “There’s always a lot of adversity that comes along our way, and I’m proud of the fight the team brought.”

Kwong was satisfied to see the success continue for the Illini. She credited trust and a unified understanding between her teammates to the team’s current run.

The recent wins have brought upon an increase in confidence and expectation for Illinois.

“When we lost the doubles point, the only thing going through my head was that we weren’t going to lose to Minnesota,” Kwong said. “Each and every one of us focused on our own court and had a goal to stay out there and earn the W.”