Illini women’s track looks to bounce back at home meet 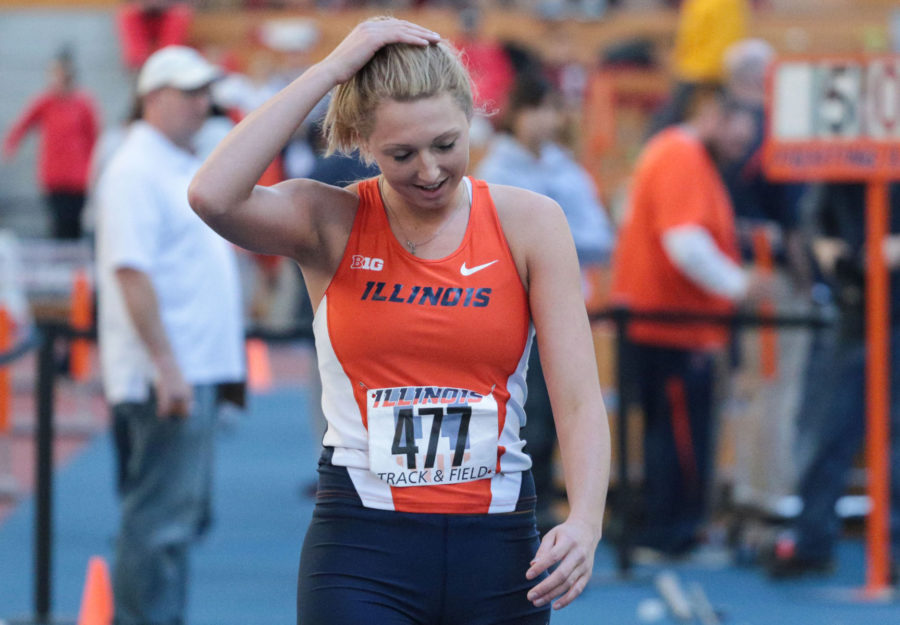 Illinois’ Kandie Bloch-Jones prepares to warm-up at the Orange & Blue meet at the Armory on Feb. 21. At last year’s Twilight meet, Bloch-Jones took first place in the high jump.

The Illini are coming off a last-place finish at the Jim Click Shootout in Tucson, Arizona, last weekend and hope to rebound in front of a home crowd.

Indiana State won last year’s Illinois Twilight with a total of 250 points. The Illini finished with 141 total points for second.

Petrey said she believes another strong performance this weekend is key for what she ultimately wants to do come season’s end.

“I need to compete with the other runners in the race,” Petrey said. “Steeplechase can be a race where it spreads out pretty quickly, or it is bunched up. For me to compete in the steeple and be successful, I need to really focus this weekend on making myself a better competitor without hurdles.”

Schneider is just trying to put in a strong effort this weekend.

“I (want) to take advantage of competing at home and not traveling and continuing to work toward my goals for this season,” Schneider said.

The senior’s main goal of the outdoor season is to break the school record for the mile, which was set by Angela Bizzarri in 2010.

As of now, Schneider said she is putting in as much work as she can, so that it can show at the end of the season — during the Outdoor Big Ten Championships — when she races in the mile.

Schneider is currently standing in 10th place all-time on the list, seven-tenths of a second behind Bizzarri’s mark.

No matter the competition, distance coach Scott Jones believes his team has a competitive mindset.

“I’m very confident in our team’s competitiveness from now throughout the remainder of the season,” Jones said. “As a group we are healthy and have had a long stretch of consistent training. The fundamentals have been put in place and now, for many of our athletes, we primarily need to rest and race. We will have good competition and good weather so all of the ingredients are in place to have exceptional performances.”

The Illinois Twilight begins at noon with field events, followed by track events at 5 p.m.