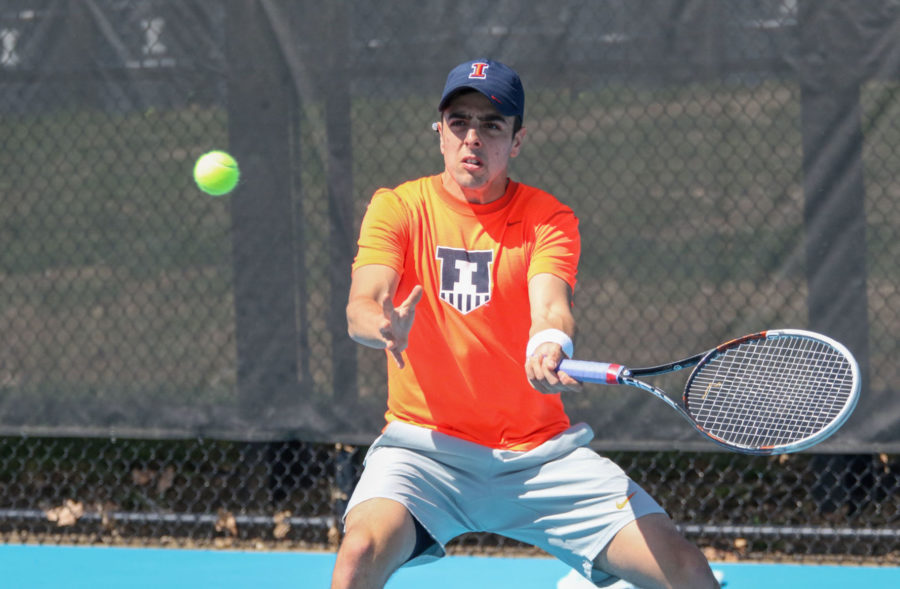 The Illinois men’s tennis team is two matches away from its first undefeated Big Ten regular season since 2005.

Illinois head coach Brad Dancer has several options for filling out the lineup on the last regular season weekend for the Illini. The team is deep, rotating nine players in and out throughout the spring.

No. 75 senior Farris Gosea, No. 23 junior Jared Hiltzik, No. 56 senior Tim Kopinski, No. 64 freshman Aron Hiltzik and No. 57 freshman Aleks Vukic all seem to be set as regulars in the line-up. That leaves the last spot up for grabs between freshman Toshiki Matsuya, junior Brian Page and seniors Blake Bazarnik and Ross Guignon. While Matsuya put together a six-match win streak in the middle of the season, he hasn’t played since Illinois’ victory over Ohio State on March 29.

Last Sunday was Senior Day, and Bazarnik, one of the day’s honorees, put on an impressive performance, grinding out a victory over Nebraska’s Bradford Zitsch, 6-2, 7-6 (7-5). Bazarnik has played all four matches the last two weekends, going 3-1 after not playing since March 16. Guignon also has seen more singles time as of late, playing one match in each of the last two weekends, his first singles action in more than a month.

The Illini won the doubles point in both matches last weekend to extend their doubles winning streak to six consecutive matches. The duo of Jared Hiltzik and Kopinski earned a national ranking this week, coming in at No. 60. Gosea and Vukic put together a particularly dominant performance Sunday in an 8-0 shutout of Nebraska’s Chris Hobgarski and Andrew Dzulynsky.

“Me and Vukic work well together in doubles,” Gosea said. “We’re both on the backhand side now, with forehands in the middle … guys want to go up the middle, and we’re just taking forehands and pushing them through.”

Minnesota is just behind Illinois in the Big Ten standings and boasts two-time reigning Big Ten Men’s Tennis Athlete of the Week No. 21 Leandro Toledo. The senior has won the award three times this spring — no one else has won multiple times. The last time the Illini travelled to Minneapolis, they lost a tight one to the Golden Gophers, 4-3 in 2013. That season they handed Illinois its first Big Ten loss of the season — the same thing the team aims to do Friday.

While the Big Ten regular season comes to a close this weekend, the Illini, Golden Gophers and Badgers will all return to Urbana next weekend for the Big Ten Tournament.