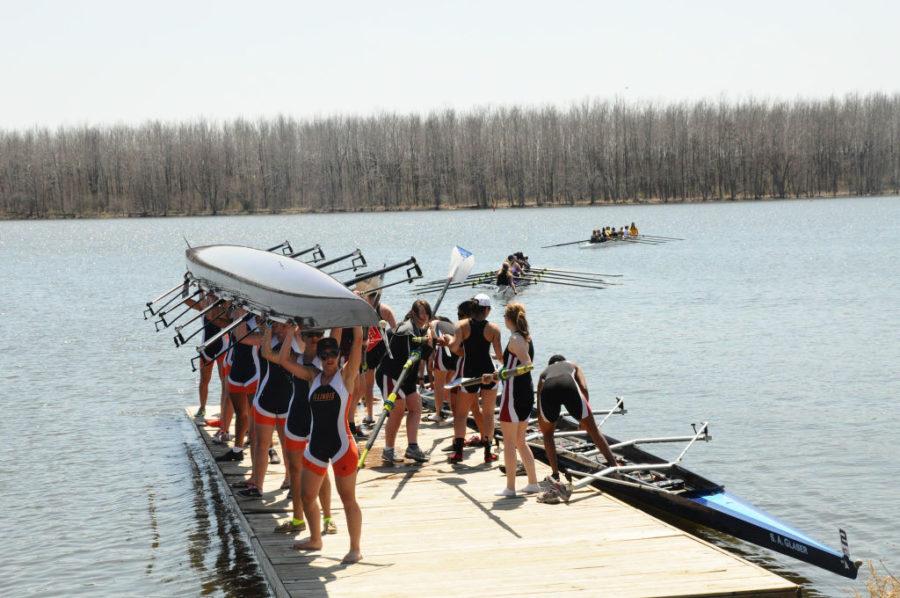 Both Illinois men and women’s rowing teams will travel to Ann Arbor, Michigan, this Saturday for the Mid-American Collegiate Rowing Association Championships.

In preparation, the teams are fine-tuning their stroke technique.

Erik Kroeker, the women’s head coach, said in addition to working on technique, the athletes must be as prepared as possible due to the high level of competition at this regatta. Among the schools included in the regatta’s lineup are Michigan, Michigan State, Grand Valley and Purdue — all top-notch programs nationally.

In addition, the Illini will face Drake’s Division I varsity program.

For the men, Varga said top competitors will be Michigan, Purdue and Notre Dame.

Kroeker said competing with these teams will be an opportunity to show how Illinois currently compares to top-flight teams.

The Illini women were about 30 seconds off of Grand Valley’s pace when they raced the Lakers on April 11 at the Don Lubber’s Cup in Grand Rapids, Michigan. Kroeker said he hopes to close that gap this weekend by about 10 seconds.

“We’re going to go into this realistically.” he said, “We don’t think we’re going to beat them this weekend, but we want to make sure we’re closing the ground so that in one month’s time when we’re going to nations, we’re a lot closer to that field than we were last week.”

Bill Grier, the men’s head coach, said the Illini will use these teams as a measuring stick.

The gap in race times isn’t the only disadvantage Illinois has when competing with top teams, especially with Division I varsity teams.

He said Illinois, compared to Michigan, for example, has about 1-10th of the funding for the Wolverines’ program.

“When it comes to coaching resources and also just financial resources for the team, we really are a class below these other programs, but we don’t really let that bother us or be an excuse for us,” Kroeker said.

Despite budget discrepancies, Illinois still has the same kind of speed as some of the top programs.

According to Kroeker, Illinois is not as fast as the top teams in the country but is in great shape considering its circumstances.

Grier said he is optimistic about this weekend. The goal for the men is to make the grand finals for each event and also start pushing up into being one of the top six teams. The top-two boats in each of three different heats of six boats determine who competes in the grand finals.

“It’ll be a little difficult,” he said. “There’s going to be quite a lot of competition especially on the men’s side, so pushing into that top six group, it won’t be easy, but I think it’s definitely something we can do.”