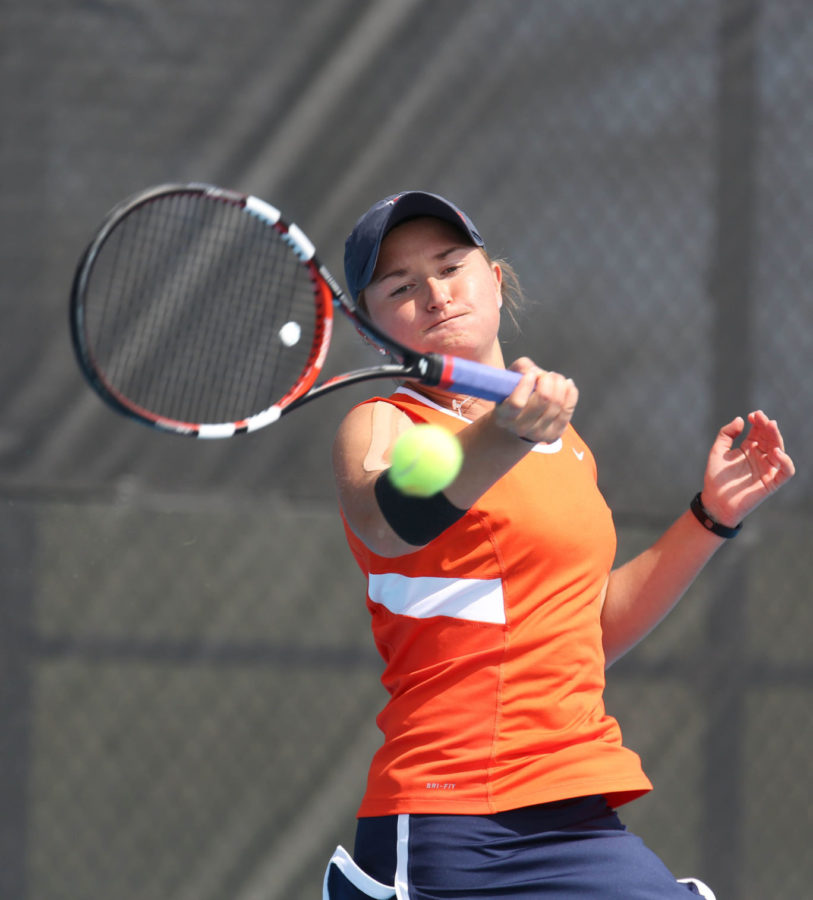 Illinois’ Melissa Kopinski attempts to return the ball during the match against Rutgers at Atkins Tennis Center on Sunday. The Illini won 7-0.

The Illinois women’s tennis team wanted revenge against Northwestern after the Illini lost to them 6-1 on March 20.

An upset was in the works on Friday in Evanston, Illinois, during the Big Ten Tournament opener, but Illinois’ bid fell short in a 4-3 decision.

No. 52 Illinois likely needed a win in order to make the upcoming NCAA Tournament.

Friday’s match was a battle to say the least, lasting six hours before sophomore Louise Kwong fell in straight sets 6-3, 6-3, giving Northwestern the final point it needed to secure a victory.

Despite eventually losing the match, the Illini got off to a fast start by winning the doubles point. Illinois won three of the match’s first four points.

After the doubles portion of the match, inclement weather forced the teams to move indoors for the remainder of the day.

Senior Melissa Kopinski cementing her name in the record books was a bright spot for the Illini. She is now in a three-way tie for third on the all-time doubles wins list with 87 wins after she and Kwong defeated Alicia Barnett and Erin Larner of Northwestern 8-7 in a 7-2 tiebreaker.

Kopinski said she is proud of her individual accomplishments, but also spoke about her teammates, who she likely played her last match with.

“This was definitely a memorable season,” Kopinski said. “Yes, we had our ups and downs, but to compete with this year’s team has been a privilege.”

Kopinski said the match was one of the most competitive matches that she has been a part of, and losing it stung.

Kwong said the team was stunned by the loss because of the intense play this time around. The players believed they could have pulled off an upset.

“It shows that were just right there with them,” Kwong said. “It could’ve went either way, and it’ll just give us more confidence for next time.”

Next time will most likely be next season for Kwong and the Illini. While Kopinski was optimistic that her team could make the NCAA Tournament, Kwong said she is pretty sure that this is the end.

Both Kwong and Kopinski admitted the season had its ups and downs, but agreed that the team fought as hard as possible to find success.

Kwong has taken a positive outlook on the loss, and said she will use it as motivation for next year.

“We certainly put up quite a fight,” Dasso said of Friday’s match. “We are playing our best tennis right now, which is a culmination of a year’s efforts, but today slipped through our fingers.”