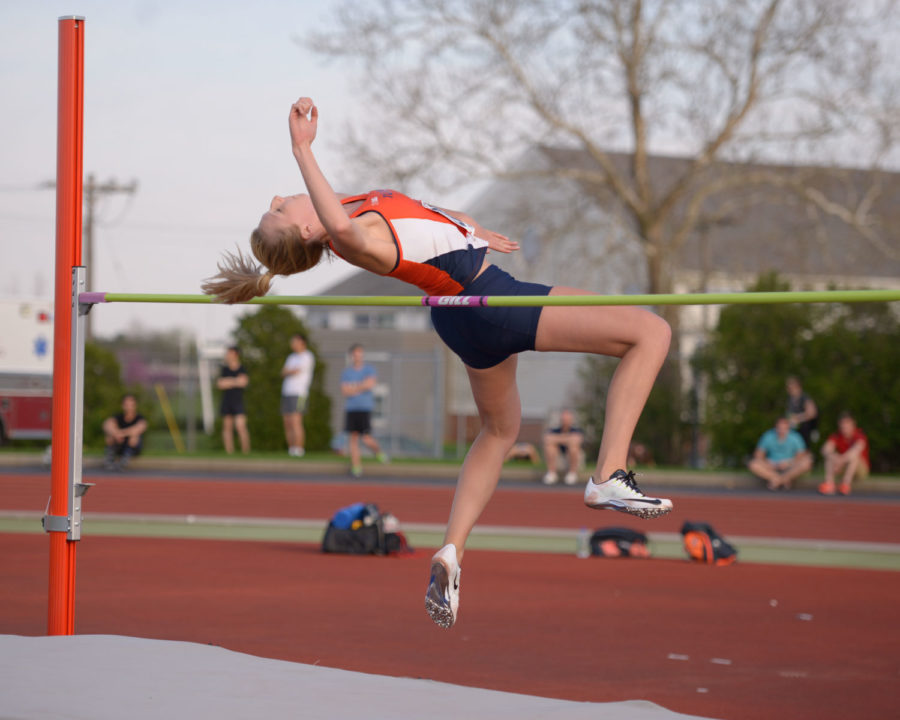 Illinois’ Kandie Bloch-Jones leaps over the bar during the high jump event at the Illinois Twilight meet on April 18.

The Illinois women’s track and field team wrapped up its regular season Saturday in West Lafayette, Indiana, at the Rankin/Poehlein Invitational, hosted by Purdue.

The Illini picked up seven event titles and 23 top-10 finishes.

Last week, distance coach Scott Jones predicted that the team would see a lot of personal-bests in West Lafayette.

“I think we saw this weekend what happens when people have worked consistently well, and we get good weather and good competition,” Jones said, “Those things all came into play so that made that predictability of good performance a pretty safe one for me.”

Bloch-Jones won the high jump, clearing a personal best of 1.84 meters. She is now tied for second on Illinois’ top-10 list.

The sophomore attributed her success to her calm demeanor going into the meet. She said since it was a smaller meet, she expected to do well, but she did not expect to win or leave with a new personal-best.

In preparation for the Big Ten Outdoor Championships, coming up on May 15-17, Schneider said the team will continue to train the same way it has in the last few weeks, while also focusing on individual recovery.

“It’s not really about trying to get in shape as it is trying to run fast in two weeks,” Schneider said.

Other top finishes for the Illini included four top-10 finishes in the 800 meters.

The Illini were also successful in the pole vault, recorded three top-10 finishes. Senior Stephanie Richartz finished first for the third consecutive week clearing 4.21 meters. Junior Jennifer DeBellis finished second and set a personal best for the third week in a row at 4.06 meters. Freshman Sara McKeeman came in fourth and had a personal-best finish of 3.96 meters.

Freshman Audrey Blazek finished the 5,000 meters in 17:47, good enough for a first-place finish and her first collegiate victory.

Junior Britten Petrey and senior Mariah Smith also finished first in their events, Petrey in the 3,000-meter steeplechase and Smith in the discus.

Bloch-Jones said that her team’s encouraging performance is especially important given its timing.