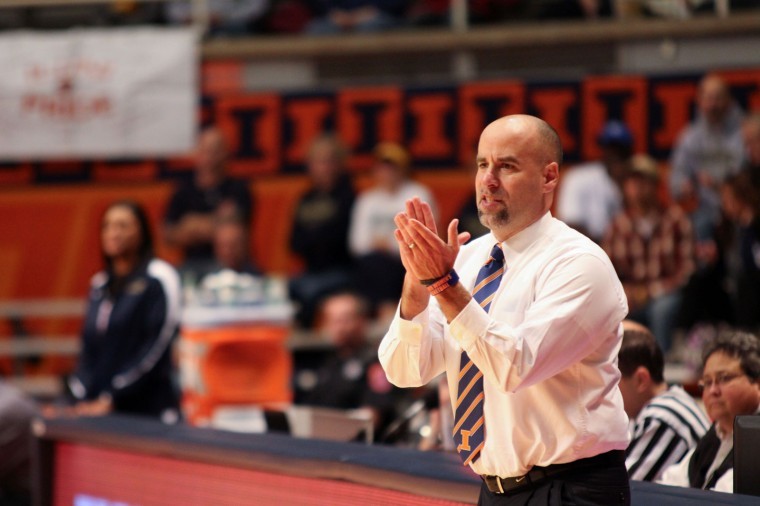 Illinois head coach Matt Bollant applauds his team’s performance during the 89-37 Illini win against Marian at State Farm Center on Oct. 30, 2012. Bollant is accused of player abuse and mistreatment and Wednesday the University announced it was contracting an outside law firm to investigate the program.

Following allegations of mistreatment of women’s basketball players at Illinois, Chancellor Phyllis Wise and Athletic Director Mike Thomas announced Wednesday they have tasked a Chicago law firm with an independent review of the program.

Wise and Thomas have chosen the law firm of Pugh, Jones and Johnson to finalize the review.

At the end of April, families of former players sent letters detailing abuse on the part of head coach Matt Bollant and former associate head coach Mike Divilbiss. These letters led to an initial internal review by the Chancellor’s office.

The accusations leveled against the coaches included allegations of racist comments, verbal abuse and mistreatment of injured players. Allegedly Bollant and Divilbiss debated holding separate practices for the African-American members of the team.

Divilbiss left the program on May 18 — his departure was “a mutual agreement” between him and Bollant, according to a University press release.

In the University’s release Wednesday, campus spokeswoman Robin Kaler said of the independent investigation that, “It’s premature to establish a timeline for completion, but the firm will work swiftly and thoroughly to conclude its work.”

The announcement of the independent investigation comes after seven families of former players sent a follow-up letter to Wise detailing their disappointment in the internal review.

The University had previously contracted a review of head football coach Tim Beckman for separate allegations of player of abuse. The review of Beckman is being handled by Franczek Radelet law firm of Chicago. Franczek Radelet is also reviewing the handling of former women’s basketball player Taylor Gleason’s injuries while she was an Illini.

Pugh, Jones and Johnson is a minority-owned firm that lists compliance and internal investigations, educational institutions and healthcare on its website as some of its areas of practice.

The University said the preliminary review by the Chancellor’s office found no violation of applicable law, NCAA rules or university policy.

In addition to the independent investigation, Thomas announced Wednesday that the athletic department would be implementing several steps to support student-athlete health and wellness.

“The fact that the recent allegations were first reported to us on social media instead of directly to us shows that in this fast-changing environment, we need to make sure we are providing students and their families even more access to internal support,” Thomas said in a press release Wednesday.

The steps include developing a student-athlete mentoring program, creating a leadership council for all sports and hiring a consultant to address workplace misconduct and the treatment of student athletes.