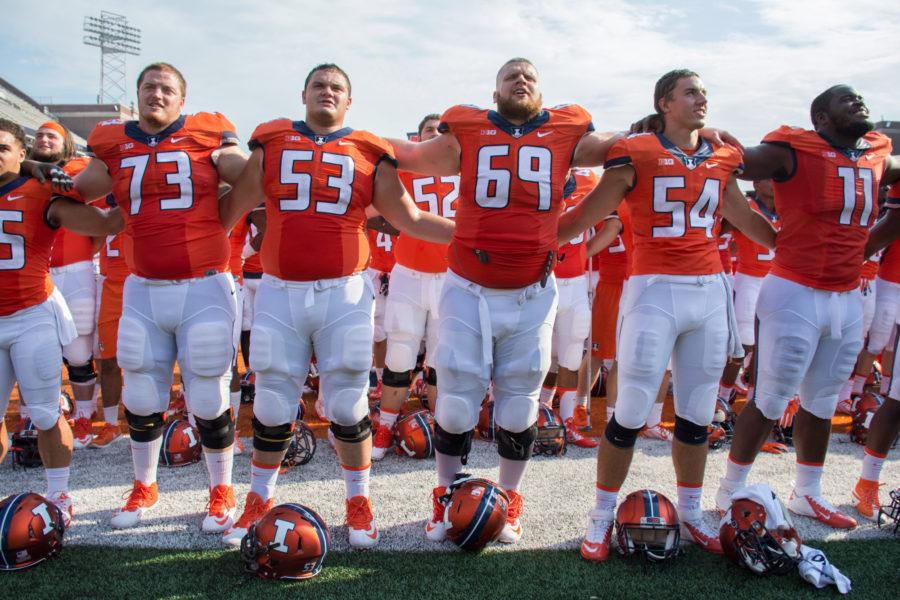 Illinois football players sing Hail to the Orange after their 52-3 victory over Kent State at Memorial Stadium on Saturday, September 5.

He thought the team would be kicking off at 10 p.m. Instead the game was postponed and Karras and the remaining Illini got an extra night to mull over the season opener.

In a 52-3 win over Kent State on Saturday, the Illinois football team proved the delayed start time didn’t make a difference.

Illinois produced its largest margin of victory since 2011 and scored the most points (38) in a first half since scoring the same amount in a 2001 win over California.

Starting quarterback Wes Lunt went 11-for-19 with 162 yards and four touchdowns each to a different receiver. Lunt threw for four touchdowns, tying his single-game best as an Illini — he threw the same number in last year’s season opener against Youngstown State.

As the Illini took a definitive lead, coaches put in younger players to gain experience.

Lunt carried the offense until seven minutes left in the third quarter, when redshirt freshman Chayce Crouch came into the game. Crouch, in his Illini debut, went 3-for-9, recording 46 passing yards and throwing a single touchdown and single interception.

With six minutes left in the game, Crouch connected with freshman wide receiver Sam Mays for the each player’s first collegiate touchdown.

“(Chayce) has worked so hard,” Lunt said. “I just told him to have fun cause it’s his first time playing college football, it’s pretty cool.”

While the score reflected a cohesive unit, the Illini struggled with penalties along the way. One drive in the first-quarter saw the Illinois offense record three penalties in a row.

“The penalties are just self-inflicting,” Lunt said. “On my part, the delay of game, just stupid things that we can easily fix. But overall we were happy with today.”

With an offense that struck early and often, players are hoping to keep that momentum around and were pleased that they led from the start on.

Last year’s opener saw the Illini trailing or within one point until the fourth quarter. They also fell behind in non-conference games against Western Kentucky, Washington and Texas State.

Today the Illini reversed the roles.

“If you think back to last year’s non-conference games, we were coming back in the fourth quarter,” Karras said. “Now were putting the nail in the coffin early which is what we want to be doing.”