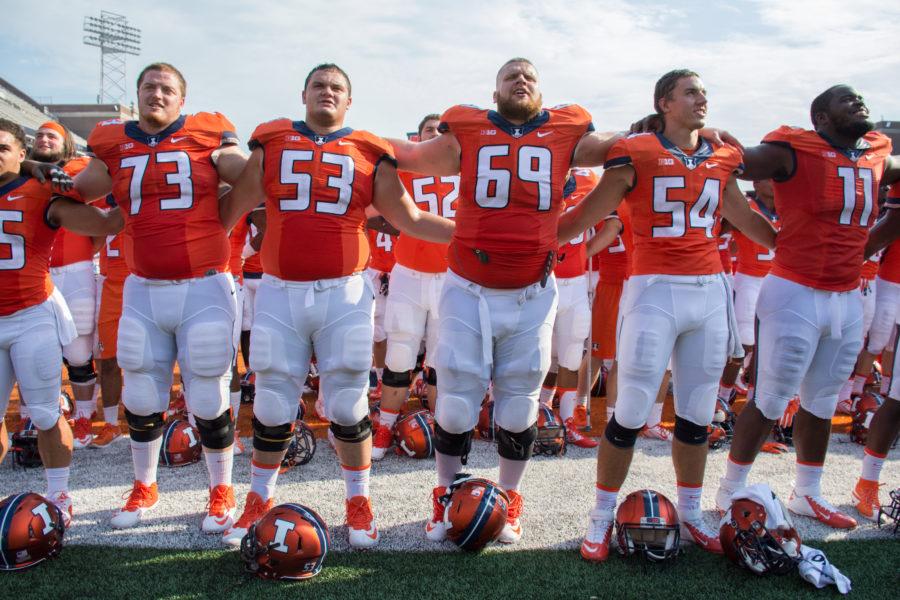 Instead, he was in a black Nike t-shirt with the words “Stay Uncomfortable” painted on it. The t-shirt carries the story of his week and new on-the-field identity.

He found the shirt in his locker Friday — fellow teammate Joe Spencer immediately tried to steal it and give it back to defensive coaches. However, after making its way through the hands of multiple Illini, it ended its journey back with Allegretti.

Defensive linemen wear black shirts and one was given to Allegretti after he made the switch from center to defensive tackle in the middle of last week.

Head coach Bill Cubit asked him to play defensive lineman after freshman Jamal Milan was injured. The question didn’t come at the end of practice, through text, or during a meeting.

Rather, Cubit asked Allegretti in the middle of practice to switch sides, so Allegretti swapped jerseys on the spot and was taking live reps with the defense by the end of their workout.
And he’s taking this new role in stride.

The shirt-stealing gimmicks have proven he still has a family on the offensive side and he intends to keep things that way. From listening to offensive linemen Ted Karras and Pat Flavin pray before games to keeping up with his offensive teammates, he said switching has been an interesting experience.

“It’s tough, because those are my guys,” Allegretti said. “I’ve been an offensive lineman man since I got here. They’re still going to be my guys, just on the other side of the ball now.”

He had plenty of help from his new defensive crew in the first week, but admitted he had to cram to learn a whole new playbook. A three-star recruit who redshirted his freshman year, Allegretti has a similar background to the first-string defensive tackle: Rob Bain.

Both wrestlers in high school, Allegretti said the biggest advantage are their skills with their hands.
“In wrestling, your leverage and the fact you can get off blocks is huge,” Allegretti said. “But you can’t do that much on the offensive line because you can’t hold. But on the defensive line, you can rip and tear — whatever you have to do.”

The two put on a little demonstration when Allegretti arrived.

“It was very intense,” linebacker T.J. Neal said with a laugh. “Those guys were all red and sweaty, it looked like a real wrestling match.”

Since committing, Allegretti has added 25 pounds (now weighing 305 pounds) and gained experience watching from the sidelines in his redshirt year. His body, his skills and his work ethic make him a valuable asset to the team.

“Nick is the type of guy that you want on your football team,” Cubit said. “We talk so much about the team, the togetherness and he just said ‘Coach, whatever you need.’ He went in there, and we thought he did some good things.”

For this week, his teammates want Allegretti to play hard, get in the playbook and get comfortable.

It’s a dual job: getting settled in his unfamiliar position while still remaining uncomfortable — like his new t-shirt reads.

But Allegretti’s end goal is clear.

“With the confidence we built up out there, hopefully we go out there and get another win,” Allegretti said. “I’m a defensive guy until they tell me otherwise. I’m just trying to make plays the best that I can.”