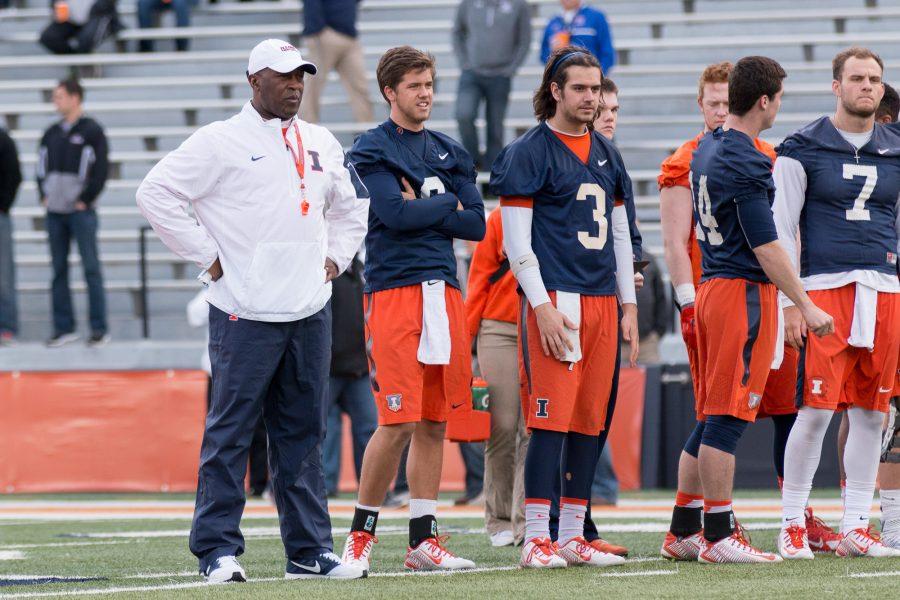 Despite his 30-plus years of coaching experience, Lovie Smith has repeatedly referred to himself as a rookie to the college game.

However, during his first game-week press conference Monday, Smith flexed the type of media savvy that the typical first-year head coach wouldn’t have.

In his opening remarks, Smith expressed his pleasure for not having to disclose injury information every week like he did in the NFL for 11 years. He was open to discussing the depth chart but mysterious in regards to schemes. And he also announced that four captains were chosen — two offensive and two defensive — but wouldn’t provide names since he wanted to be the one to break the news to the selected players.

“We don’t have a whole lot of secrets,” Smith said with a grin.

Illinois released its first official depth chart — one of the few things Smith was relatively candid about.

There weren’t too many surprises with how the positions unfolded — Smith even made sure to drop a “Wes Lunt is our quarterback” line — but a few position questions were officially answered.

Perhaps the most heated training camp position battle was for the strong-side linebacker spot. When Murray State comes to town, sophomore Tre Watson will lineup to the left of graduate-transfer Hardy Nickerson, beating out redshirt-freshman Justice Williams and sophomore Julian Jones.

Smith said he wanted the linebackers on either side of Nickerson to have similar builds, and Watson’s 6-foot-2 frame matches that of weak-side linebacker James Crawford.

“Tre has played all three positions,” Smith said. “He’s smart, he’s been an instinctive player and has just gotten himself in the position for playing time. He’s a young player and hasn’t played a lot and now it’s time to step up.”

The strong-safety position has been thought to be inherited by senior Caleb Day, but sophomore Julian Hylton made a positive impression on the coaching staff throughout camp and will be the Week One starter.

On the offensive side, much is as expected. Justin Hardee and Malik Turner are the starting receivers with Desmond Cain and D.J. Taylor as their respective backups. Instead of a third receiver, though, a fullback will be listed on the weekly depth charts — junior Nate Echard will take on lead blocking responsibilities for sophomore running back Ke’Shawn Vaughn.

“I’m trusting in Nate just like I did last year, knowing that he’ll be the guy to take on the blocks with the linebackers,” Vaughn said. “He’s just a physical guy.”

No kick returners or punt returners were listed, although Smith said he has that figured out, too. There are just some things the first-year coach likes to keep himself.

“You know, when you have a rookie (coach), you have to take advantage of him right away before he really figures it out,” Smith said as he left the podium.

There doesn’t seem to be much left for Smith to figure out heading into Week One.