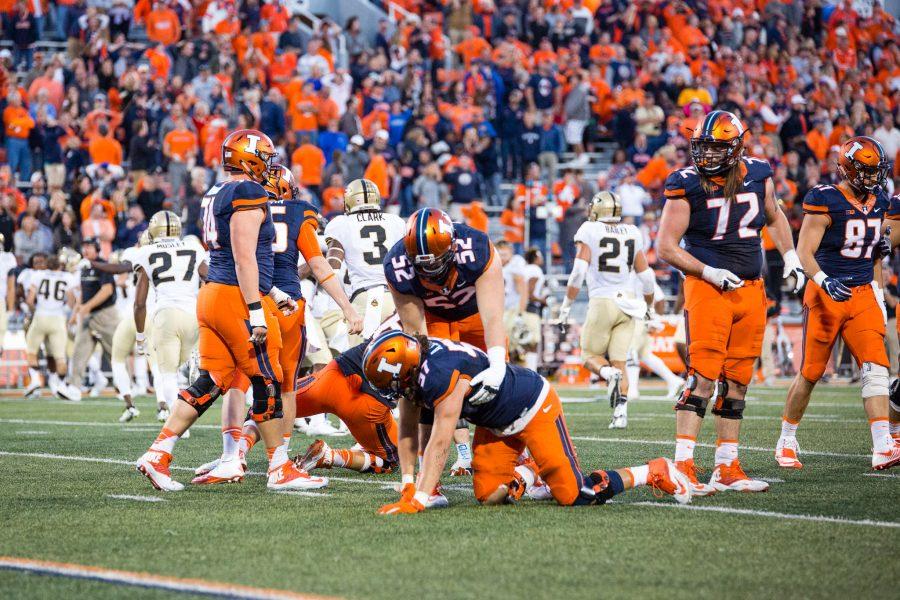 Illinois offensive lineman Austin Schmidt (57) gets helped up by Adam Solomon (52) after place kicker Chase McLaughlin missed the field goal to win the game at the end of the fourth quarter in the game against Purdue at Memorial Stadium on October 8. The Illini lost 34-31.

Illinois kicker Chase McLaughlin had not missed a field goal all season.

But he missed a 41-yarder that would win the game with three seconds left in the fourth quarter, and Purdue beat Illinois 34-31 in overtime at Memorial Stadium on Saturday.

The Illini started with the ball in overtime, but quarterback Chayce Crouch fumbled and lost the ball. It was the Illini’s first and only turnover of the game. Purdue took over, and kicker J.D. Dellinger completed a 28-yard field goal to win.

Starting quarterback Wes Lunt left the game in the second quarter after a late hit. He did not return after heading to the locker room before half time. He completed four of nine passes for 42 yards before he left.

Backup quarterback Chayce Crouch took over in Lunt’s place, and provided a much needed spark for the Illini offense. After Lunt went down, Crouch led the Illini down field in six plays for 61 yards and a touchdown.

Crouch continued to pressure the Purdue defense, recording 142 yards in the air and 137 yards on the ground. He led the team in both rushing yards.

But without the win, the performance didn’t mean much to Crouch.

“Because we lost, those moments do not mean as much to me right now,” Crouch said. “I have one goal every time I play anything, and that is to help my team win. I could’ve done more today.

The defensive line has been the Illini’s biggest strength all season, but it did not leave its mark on the first half Saturday. The Illini only hurried Purdue quarterback David Blough once, and recorded only two tackles for loss.

“I was not (pleased) at all defensively,” head coach Lovie Smith said. “Third downs killed us. Them running the football, it is hard to win when that is the case. Each week they are big runs. We are not set up to give up a lot of big plays like that. We have some players that need to step up and play the way they are capable of playing.”

Purdue hit Illinois with a balanced attack. Blough threw for 220 yards and one touchdown, completing passes to nine different wide receivers. The Boilermakers ran for 231 yards with three touchdowns.

The Illini ground game dominated, gaining a total of 315 rushing yards – the most they have had all season.

Illini running back Reggie Corbin got his second career start, recording 92 rushing yards on 11 carries, and running back Kendrick Foster contributed 55 yards and a touchdown. Ke’Shawn Vaughn also made the most of his chances, running for 31 yards on two carries.

Corbin gave all the credit for the running games success to the offensive line.

“There was nothing really different (for the running backs),” Corbin said. “It was our offensive line doing great. And our tight ends doing amazing, and our receivers doing great. They are blocking. I don’t know if you guys see it, but they are blocking their tails off, and it’s nice.”